As everyone and their moms know, Taylor Swift and Karlie Kloss are still friends. The two confirmed it with a selfie in August before Kloss made the news official herself in a message to Jennifer Lawrence. (“Jen, don’t worry, Taylor and I are still really good friends,” she said.) But here’s the real question: Did Swift attend Kloss’s wedding in October?

Here’s what we know: The 28-year-old married financial investor Joshua Kushner (brother of Ivanka Trump’s husband, Jared Kushner) on October 18, 2018. Kloss confirmed the news with a picture of her and her husband holding hands and laughing. Other than the snap, no other pictures were shared and no guest list has been released. Still, fans are confident Swift wasn’t there—and here’s why.

On the day of Kloss’s wedding, the 28-year-old singer announced on Instagram that she was in Perth, Australia for the next leg of her Reputation Stadium Tour. Now, for those wondering if Swift flew to Australia after Kloss’s wedding, the singer made it clear that it took her (and exaggerated number of) “131,313” hours to travel there. In reality, it takes about one day to fly from New York to Perth, so even if Swift had the highest speed jet, she likely would be cutting it close. 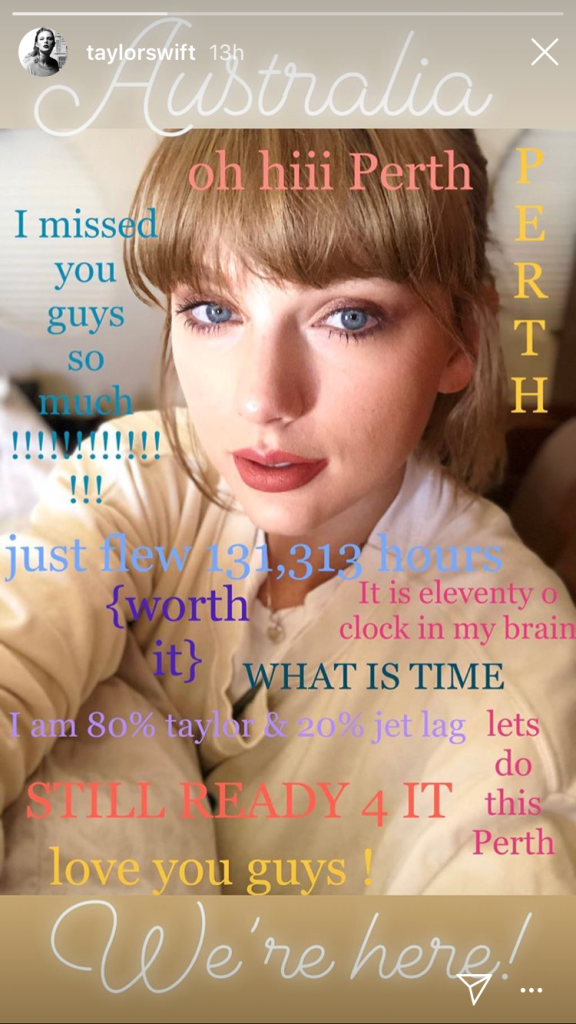 Though it’s not confirmed, it’s likely Swift wasn’t at Kloss’s wedding. Why she wasn’t there? She’s on tour. Why she didn’t move her tour dates? We don’t know. Kloss got engaged in July, so perhaps that wasn’t enough time to reschedule or maybe it isn’t so easy to rearrange a world tour. Either way, we believe Kloss and Swift in that their friendship is repaired. Were sure they celebrated Kloss’s wedding their own way.