Dead to Me season 2, which premiered on May 8, followed Jen and Judy as they covered up the murder of Judy’s fiancé Steve, who Jen killed at the end of season 1. Through flashbacks, we learn that Jen killed Steve by bashing his head with a wooden bird in her robe pocket. (She tried to shoot him with a gun but didn’t have any bullets.) After she broke his skull, Jen pushed Steve into her pool, where he drowned to death. Jen and Judy then move Steve’s body to a locked freezer chest in her garage, but when Jen learns that her garage is infested with rats, she must move Steve’s body before the rats eat their way through the freezer. And so Jen and Judy take Steve’s body to the Angeles Forest, where they bury it. Unbeknownst to Jen, Judy carves a heart into a tree near Steve’s body to keep track of where it is.

Fast forward to the finale and Jen confesses to Steve’s murder out of guilt. (Find out everything that happened in between here.) But when Jen and Perez drive to the Angeles Forest to look for the body, they can’t find it. On the way back, Perez tells Jen that she won’t arrest her, as she feels sorry for her and there isn’t sufficient enough evidence that Steve is dead. In the final minutes, we see a dog dig where Steve’s body is buried and the dog’s owner ask what it found. 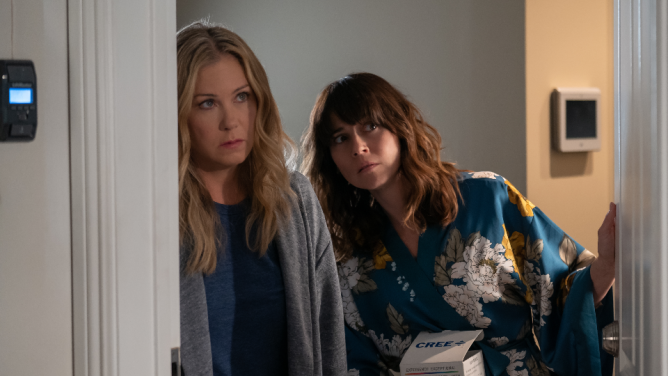 We also see Steve’s twin brother, Ben, receive an emotional call that leads him to drink and drive. In the final scene, Jen and Judy stop at a stop sign near Jen’s house that Jen petitioned for after her husband, Ted, died because there wasn’t a stop sign near her street. After the two celebrate the stop sign, they drive forward, which is when a speeding car hits them head on. We see that the driver is Ben who drives away from the scene. Judy then screams for Jen to wake up, and in the last second, Jen comes to her senses and asks, “What happened?”

Long story short, it seems like Jen is def alive. For now. After Judy tells her that they’ve been hit, she says, “Oh shit.” And that’s where season 2 ends. We also doubt that Dead to Me would kill its main character (and Christina Applegate, for that matter), but we don’t know what will happen in season 3.