The rumor mill has been swirling for weeks ever since Harry Styles and Olivia Wilde stepped out on the Venice Film Festival red carpet for Don’t Worry Darling. Given the supposed couple were posing so far apart, it prompted fans to wonder: Did Harry Styles and Olivia Wilde break up amid all the drama? Liv seems to have put those rumors finally to bed.

Did Harry Styles and Olivia Wilde Break Up?

According to sources close to the couple, the rumor that Harry Styles and Oliva Wilde have broken up is “nonsense,” per a report by The Sun. And photos from Harry’s final show at Madison Square Garden in New York on September 21, 2022, appear to support that. Liv was in attendance at her beau’s MSG finale after 15 consecutive performances at the arena. Photos obtained by the Daily Mail show Olivia watching in adoration while sporting a feather boa like all true superfans.

Speculation of their breakup began when the cast of the film–Harry, Florence Pugh, Chris Pine, Gemma Chan, Sydney Chandler–and its director, Olivia, posed for photos on the red carpet. But notably, there was space between the former One Direction star and his girlfriend. Allegedly, when photographers asked the couple to pose together, Harry refused. “Someone from Olivia’s team asked Harry to take pictures with/stand next to her and he said no,” Twitter user @amitheonlyone_n tweeted with footage of the supposed incident. A source close to Olivia said the reason the couple didn’t pose together on the red carpet or sit next to one another in the theater for the screening is because they’re “trying to keep the focus on the movie,” an insider told Hollywood Life. “They intentionally decided to keep the focus off their relationship by not walking the carpet together because they don’t want to distract any more from the movie.”

Fans also believe photos of Harry seeming to avoid eye contact with Olivia are more evidence that something is up between them. One Twitter user claimed: “I think Harry + Olivia have split or had a big fight. They actively avoid eye contact.” Another said: “I think Harry and Olivia are going to split up in the near future.” The wildly popular celebrity gossip Instagram account @deuxmoi was asked to comment on the supposed breakup rumors, saying in a now-expired Instagram story: “Ok so… I don’t personally think based on the info I have received that they are done, however, things are on edge as fuck. Like, they have been for the past week or so.” 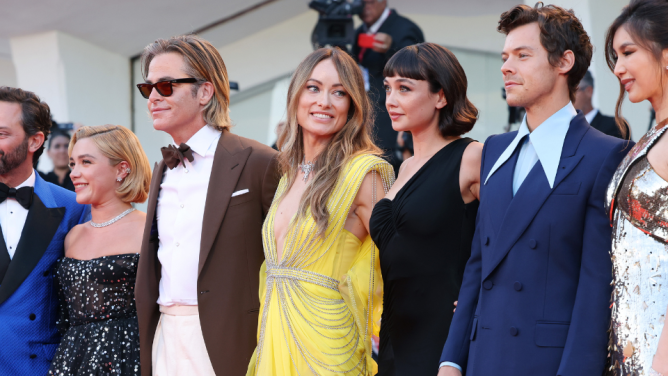 It’s just the latest in a string of scandals leading up to the release of Olivia’s second foray into directing. The initial clash between Don’t Worry Darling star Florence Pugh and its director began when it was rumored Liv got romantically involved with Harry while she was still engaged to Jason Sudeikis. On set. Which sources said made Florence and some of the other actors uncomfortable. A source revealed to Page Six that “Flo seeing Olivia and Harry all over each other on set did not go down well as Olivia was still with Jason when she first hooked up with Harry,” the source said. Another inside revealed that “Jason and the kids visited Olivia on set at the beginning a few times, so I think this all made people feel a little uncomfortable.”

Liv and Flo have also apparently clashed over the marketing of the film. While Olivia is proud her film more accurately and honestly depicts female pleasure, Florence sounds disappointed the bulk of attention on the film is based on its sex scenes. “I kept saying, ‘Why isn’t there any good sex in film anymore?” and has since made comments on the lack of female pleasure in mainstream cinema: “When it comes to female pleasure, it’s something that we just don’t see very often unless you’re talking about queer cinema,” Olivia told the Associated Press in late August 2022. Contrarily, Florence told Harper’s Bazaar in her September cover story: “When it’s reduced to your sex scenes, or to watch the most famous man in the world go down on someone, it’s not why we do it,” she said. “It’s not why I’m in this industry… Obviously, the nature of hiring the most famous pop star in the world, you’re going to have conversations like that. That’s just not what I’m going to be discussing because [this movie is] bigger and better than that. And the people who made it are bigger and better than that.”

Don’t Worry Darling premiere in theaters on September 23 and will be available to stream on HBO Max on November 7.