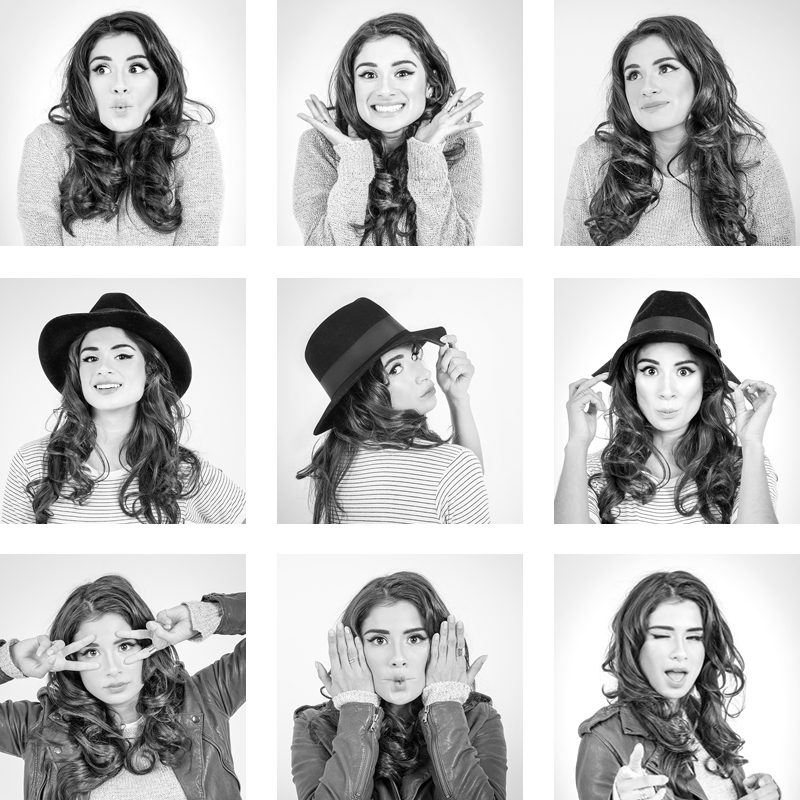 You might not be on a first name basis with Diane Guerrero yet, but we suggest you get her on your radar, and soon. Fans of Netflix’s beloved series “Orange is the New Black” know her as inmate Maritza Ramos, while CW lovers will surely recognize Guerrero as Lina from the network’s new big hit “Jane the Virgin” (the best friend to the religious Jane, who gets pregnant after accidental artificial insemination.)

The 28-year-old—raised in Boston, but whose family is from Colombia—started her career working in a law office after college, until it dawned on her that acting was her passion. She moved to New York City, started hitting the pavement, and even trolling Craigslist for roles. Now, with two big shows on her resume, we have a feeling her star is very much on the rise.

Guerrero stopped by the StyleCaster office to chat about everything from how she got the part on “Orange” to dressing for the red carpet, and immediately won us over with her hat obsession and her story of fan-girling out after spotting Meg Ryan on the street.

StyleCaster: We’re obsessed with “Orange is the New Black”—how did you get the part?

Diane Guerrero: I just auditioned like everyone else. It was the summer, and summer is usually slow for actors. I was a little down because I had been auditioning a lot. I had a manager at the time, but I was still looking for stuff on Craigslist, looking under the artist section, and trying to get work that way. I remember those days I was really hitting the pavement, and just taking my headshot door to door. And I was going to some sketchy places too.

So when I got the audition, I remember I was talking to my dad, and I was like, “This is not going to work!” I’m sure everyone will tell you when they get a part in something really special everything that happened that day, and I’m pretty sure everyone will tell you that they were ready to throw in the towel that same day, and that’s exactly how my experience went. It was cool because the breakdown [casting call] said to not wear any makeup, and to not do your hair, and to look like you just rolled out of bed. So I remember I just wore a t-shirt and sweatpants and put my hair up, and that was it!

Now that you’re on “Jane The Virgin” too, what’s it like switching between two very different characters?

It’s funny because when I’m on set on “Jane” and I’m riffing back and forth with Gina [Rodriguez, who plays the title character], and we’ll be goofing around, and sometimes I’ll say something that sounds very hood—very Maritza—and we’ll both just start cracking up, and I’ll have to shake myself out of it. For Maritza, I’ve been working on her for a little bit, and I think every time I go in, she’s a little more real to me. As soon as I put on the outfit, I just transform.

Maritza’s makeup signature is the cat-eye, how does she do it?

I do the cat-eye a lot too, it’s kind of my favorite look. Maritza doesn’t do it the cute way, starts from the bottom of her lid. It’s actually not that flattering. Her whole outlook is, just look pretty, it doesn’t matter that you’re in jail, you still have to look good. I think that’s what keeps her afloat, this whole idea that just because you’re in jail doesn’t mean you have to let go of those little things.

Tell us a little bit about your personal style. What what are you loving right now?

I’m a big hat person. Right now I’ve been rocking Borsalino and Goorin Brothers. There are just too many hats in my small apartment. Once I move to a bigger place, I’ll have a hat room—that’s my goal.

How do you tackle red carpets?

Right now I’m still trying to figure out my look. I’m still awkward. Every picture I’ve seen of myself of the carpet, I’m just like, “Can this go away?” So now, going on the carpet, it’s me trying to erase the previous look. The last look I did, though, I really liked—it was a Haute Hippie white suit. I really enjoyed that.

So tell us about one of your red carpet looks that you really hated.

I normally don’t do tights, it’s just not a thing that I do, but one time I wore this leather tube top dress, with a flirty skirt, and tights. I don’t know why I did it myself, but I did, and that was bad. This is why I say no to a lot of events, because I get really overwhelmed and scared, and just feel like I can’t do it. It’s a hassle finding something to wear and getting makeup and hair ready, and I do a lot of it myself. And then, when I am with everyone else who had their hair and makeup done, I end up feeling like, oh well, I didn’t use enough hair spray, clearly.

Have you started to get recognized on the street yet?

Sometimes people come up to me and say, “Hey, can we have a hug?” and I’m like “I don’t know you.” But I’m so open to people, and I want to everyone to be my friend, so it’s been really cool. It can also be funny. Because I’m not a household name, a lot of times people will come up to me and stare at me and be like, “Where do I know you from, did we go to high school together, have we gone on a date?” I don’t really understand how it happens, but I can relate to it. I saw Meg Ryan on the street recently and I screamed “Meg!!!”

You’re on two TV shows that are promoting diversity—do you think Hollywood is getting more inclusive?

I do think Hollywood is opening up more to women. It’s been great to see. I’m noticing more women on-screen with more challenging roles, which I’m really happy about, and it’s also becoming more diverse. The times when I wasn’t getting any work, those are the times when I felt like Hollywood wasn’t letting in women or women of color, because I wasn’t being hired, and now that I am getting opportunities to work and to flex some of my muscles, I do see that some doors are definitely opening.

Since you’re on a show that people love to binge-watch, we have to ask—what are you bingeing on?

It’s my favorite thing to do. I just binged-watched “New Girl.” I know I’m late to the game, but I’ve been binge-watching a lot of those shows that I let slip through my fingers. I also love “Parenthood.” It’s such an emotional show and I’m always thinking, can I just stop crying or can they just stop crying? I’m also really into “Red Band Society.” You’ll cry and you’ll laugh.