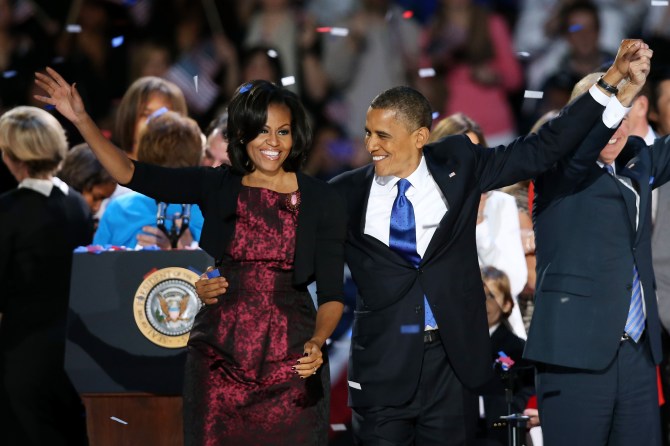 After a seemingly endless campaign process, we have officially determined our President of the United States. At around 11 p.m. last night, it was announced that President Barack Obama would be serving a second term. At around 2 a.m., Obama took the stage following Republican candidate Mitt Romney‘s concession — and while we were thrilled to see what he had to say, we were equally as excited to see what his lovely wife Michelle would be wearing.

Our FLOTUS opted for a stunning burgundy brocade Michael Kors shift dress that she previously wore at a December 2009 holiday event and the Medal of Honor ceremony in November 2010. She completed the ensemble with a simple black cardigan and one of her trademark brooches. This wasn’t the first time Obama made headlines for her Election Night fashion: For her husband’s Election Night Win back in 2008, she wore a Narciso Rodriguez shift dress straight off the Spring 2009 runway.

While we loved the fashion forward Narciso number, last night’s Kors frock sealed the deal. It doesn’t matter how many times she wears a dress when she wears it this well. We may have gotten used to seeing Ann Romney in her odd leather ensembles, but we’re pretty relieved we get to ogle over Michelle’s fashion choices for the next four years.

Update: Obama’s daughter Sasha wore a Chris Benz skirt, and Malia wore Gregory Parkinson. We’re not going to lie — this is probably the cutest news of the day.