There are times when people just don’t get along, and then there are other times when outside forces are causing chaos. Demi Lovato reacted to Taylor Swift’s Lover album in the sweetest way and people are legit shooketh. It’s true that Demi and Taylor haven’t always had the best relationship. Demi, for her part, has said more than a few shady things about the “ME!” songstress in the past, but it looks like she’s putting all of that behind her.

During the MTV VMAs last week, Swifties were certain that Lovato skipped the awards ceremony to shade Taylor–which wasn’t true. Now, Demi is setting the record straight about her feeling about Taylor. After listening to Lover, Demi posted on her Instagram stories, “Life’s too short for women to not support other women. Especially when women release great music. Great job @taylorswift.”

Taylor apparently, really appreciated the gesture because she reposted Demi’s story and added, “This is so awesome & put the biggest smile on my face. Thank you @ddlovato.”

Recently though the women haven’t had any personal beef, they haven’t exactly seen eye-to-eye. Taylor called out Demi’s current manager Scooter Braun for bullying and for attempting to derail her career. Demi was very upset by the accusations and said, “I have dealt with bad people in the industry and Scooter is not one of them. He’s a good man,” she wrote. “Personally, I’m grateful he came into my life when he did. Please stop ‘dragging’ people or bullying them. There’s enough hate in this world as it is.” 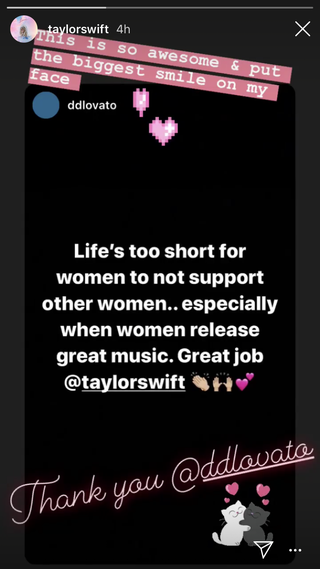 Still, business is business and just because Demi has had a positive experience with Braun doesn’t mean Taylor has. When the “Sorry Not Sorry” songstress signed with Bran she said on IG,

Dreams came true for me. I officially have a NEW MANAGER. And not just any manager but the one and only. Couldn’t be happier, inspired and excited to begin this next chapter. Thank you for believing in me and for being a part of this new journey.

We’re just glad these ladies are putting their differences aside for the music.