If you still haven’t recovered from her death in the original series, you may want to know: Is Debra alive in Dexter: New Blood?

Dexter: New Blood, which premiered on Showtime on November 7, 2021, is a reboot of the network’s original Dexter series that ran for eight seasons from 2006 to 2013. The show, which was based on Jeff Lindsay’s Darkly Dreaming Dexter books, followed Dexter Morgan, a forensic technician at the Miami Metro Police Department, who lives a secret life as a serial killer who murders other murderers. His younger sister is Debra Morgan, a detective at the Miami Metro, who is unaware of her older brother’s murderous ways until the the end of the series.

Dexter: New Blood is a miniseries set 10 years after the original Dexter. The show follows Dexter and his life Iron Lake, New York, where he lives under the name of Jim Lindsay, a local shopkeeper. The series also follows Dexter’s relationship with Angela Bishop, Iron Lake’s chief of police, and  his fight to suppress the “dark passenger” within him and his urge to kill. In July 2021, news broke that Jennifer Carpenter would reprise her role as Debra in Dexter: New Blood, which led fans to wonder if Debra was alive. “[It would take] an extraordinary script many, many, many years from now,” she said to The Hollywood Reporter at the time. “I don’t know if that’s possible because people don’t come back from the dead.”  So…is Debra alive in Dexter: New Blood? Read on to find out her fate. 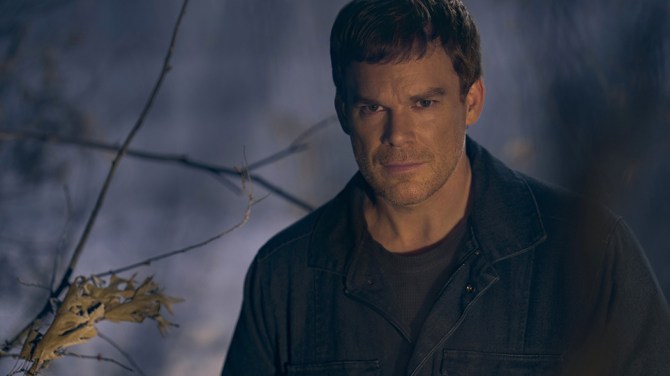 How did Debra die in Dexter?

Debra dies in the Dexter series finale after she’s shot by serial killer Oliver Saxton. In the episode before the finale, Dexter captures Saxton, but instead of murdering him like he’s done to other serial killers, Dexter—who no longer has the urge to kill due to his relationship with Hannah—spares Oliver’s life and calls Debra, a detective for the Miami Metro, to arrest him.

However, when Debra arrives at Saxton’s location, the plan was foiled when Max, a U.S. Federal Marshal investigating Hannah, follows Debra and interferes with the arrest. During the distraction, Saxton kills Max and shoots Debra before he escapes. In the finale, Debra is rushed to the hospital. When Dexter learns that Saxton shot Debra, he rushes to the hospital, where the doctor tells him that she’s hopeful Debra will recover. At the hospital, Debra tells Dexter to live a happy life free of guilt. Dexter leaves to deal with Saxton, but when he returns to Debra’s hospital room, he finds the room is empty. The doctor tells him that Debra’s condition has worsened and that she had a blood clot during surgery that caused her to suffer a stroke, which left her in vegetative state.

In the final scenes of the episode, Dexter, who blames himself for what happens to Debra, takes her off life support. He then takes her body to sea and drops it into the water. The show ends with Dexter faking his death and living under a new identity in Oregon.

So..is Debra alive in Dexter: New Blood? The answer is no. Debra is a hallucination who serves as Dexter’s voice of reason similar to how his father, Harry, did in the original series. “I don’t think of her as a ghost [per se, but] more of a link or an echo or an inconvenient truth for Dexter,” Jennifer Carpenter, who plays Debra, said at a Television Critics Association panel in August 2021. “[She] comes back to sort of haunt and punish and caretake and provoke and love [him].”

Michael C. Hall, who plays Dexter, added, “As much as [Deb] is an internalized character for Dexter, I think [she] represents how far he’s fallen… without a compass. I was so excited about Jennifer doing this because I knew she would be able to shape shift and come at Dexter from so many different places. And, of course, she did. And it was really fun to crack open our sense of [Dexter]’s internal landscape, because it’s much more pyrotechnic and crazy than it used to be.”

In an interview with Entertainment Weekly, Carpenter explained that she’s more than a voice in Dexter’s head. “I don’t think it’s as simple as that. That’s part of what those conversations were about. What purpose would I serve coming back?” she said. ” I thought the only reason to bring the show back was so we could see what would become of an unmedicated, unchecked, unpunished, decoded, serial killer. What would the dark passion passenger look like if it had an all-access pass to this man? I wanted to come back and haunt him, comfort him, console him, encourage him, love him, hate him, and ruin him.”

She continued, “So, it’s such a difficult thing to speak about because I’m not even sure how it happened. We never shot anything in order. It feels like this sort of encased season happened on a four-lane superhighway. [I] just sort of barreled down the highway, but I’m this strange, weird spooky kind of side road that goes somewhere totally different. It almost felt like the story exists on two campuses. We’re under the same University of Dexter, but I never had to really track what was going on the way the actors did. It was really about visceral taking the temperature of the room and deciding how I want to manipulate it all.”

She also revealed that it wasn’t until “much later” after the Dexter finale aired in September 2013 that she had conversations about Debra’s return. “It felt open-ended enough that that possibility remained. But conversations didn’t start in a real way until much later,” she said. “I think the impression I got was that number one, Deb was dead and that Michael needed a moment away from it. So it was never something that I actively took the temperature on unless the conversation was brought up to me.”

She explained that the opportunity came about when she met with Showtime around May 2019 to discuss if a Dexter reboot with Debra was possible. “Michael and I have stayed in touch and throughout the years and he would bring it up with what would seem like simple questions, but are actually very difficult. Should we? Could we? How would that look? Would you want to do it?” she said. “Around May of 2019, it started to get quite real. I was in Los Angeles doing some press and I went over to Showtime’s offices to have a conversation about whether Deb would be involved.”

She continued, “Some things I felt inspired to say on her behalf. I also just wanted to listen about what it would look like. Dexter was around when cable TV was starting to raise the bar of what content could look like. Fans have been so loyal and enthusiastic. So I wanted certain things from it on their behalf before I was ready to go back.”