Things are very different at Winchester University this term–and the ladies of Dear White People are happily diving into the juicy details for Season 3. When we last left Sam (Logan Browning), Joelle (Ashley Blaine Featherson) and Coco (Antoinette Robertson) they were all facing some very tough truths about themselves. Things get even heavier this season.

When Season 3 opens three months later, all three of the women are in very different places in their lives. They are learning –as many of us did in college–that the true journey is about growth and evolution. Ahead of the Season 3 premiere of Dear White People, STYLECASTER sat down to chat with leading ladies–Logan Browning, Ashley Blaine Featherson and Antoinette Robertson to chat about trauma fatigue, why #MeToo is such an important theme this season and some hilarious behind the scenes secrets.

“I believe there is a thing as trauma fatigue,” Robertson reflected. “Sometimes you really just need a moment to take care of yourself and check-in with how you’re feeling. I feel like when you’re bombarded with all the negativity of the world, you can just experience emotional burnout.”

The burnout is something nearly all of the characters on DWP are battling this season–leading them to analyze various aspects of their identities. “As far as Joelle is concerned, I don’t think she’s so much dealing with trauma fatigue,” Featherson explained. “I think she’s emotionally exhausted because she takes on what everybody else is going through and suppresses it a little bit. I think that’s a real thing too.” 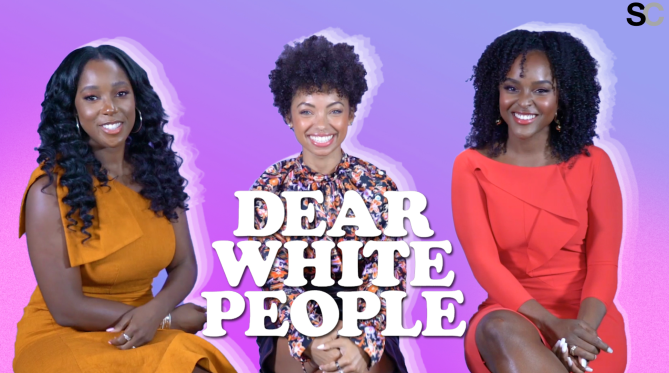 For Sam–having lost her father in Season 2–the exhaustion stems from a different source. “I think Sam actually has it in her to be a part of the [#BlackLivesMatter] movement forever,” Browning revealed.  “I think that’s actually a bone in her body, but I think that the trauma that people have placed on her, and the trauma of experiencing being a part of a movement–she has to step away for her sanity. But in Season 3 you notice she is constantly pulled back to it because she isn’t saddened or sickened by it, she’s always just wanting to help. My brother said this to me the other day. He’s like, ‘I don’t wish losing a parent on anyone, but it’s very interesting how it changes your perspective on life and how it oddly helps you get through things.’ I think that’s interesting. Losing her dad is traumatic and it’s probably weighing on Sam, but also it’s what’s pushing her, too.”

Loss, trauma, activism and mental health aren’t the only topics that Season 3 of Dear White People tackles–there is also an entire storyline that centers #MeToo conversations. “It feels like rape culture has been normalized by the media,”  Robertson articulated. “So, instead of saying an older man took advantage of a child or a young girl, they’re saying a young woman. No! She was 15, she’s a child. We’re probably going to have more conversations that stem from this piece of art that we created. I feel like in all the things that we watch, so many things point towards women not being equal to men, I feel like when people are violated and choose to speak up, they’re attacked. Once that changes in our society, the things that we create will be far more impactful.”

For Featherstone–we still have a long way to go before society truly shifts away from toxic masculinity and rape culture. “I don’t think that us exploring this in Season 3 of Dear White People is going to inspire people to stop behaving that way all of a sudden,” she said. “I think that it will inspire more open conversations about it. It will inspire people to be more transparent about it. But, I think we have a long way to go before we feel the brunt of what that is really doing to people, but especially to women.”

Still, the #MeToo movement has emboldened the women of Dear White People to continue having these conversations in an industry that often silences women. “What’s really important about the content that is shown in Season 3 is that the character who stands at the center of this is not sure if what happened to her was wrong,” Browning explained. “There are so many microaggressions that happen to women–some of us second guess ourselves. But, if you don’t consent to something or if someone is in a higher power position than you, that is an inappropriate situation and they are at fault. Any of us can be in this type of situation. A lot of times men are seen as the antagonist in a #MeToo situation, but women can do the same thing. As a woman in entertainment I’ve learned to not feel like, ‘Oh, I’m so happy to be here.’ We all get to say exactly what we need and what we want in order to keep ourselves and our sisters safe.