Warning: Spoilers ahead for Dead to Me season 2. Dead to Me sure knows how to do a cliffhanger, and season 2 is no exception. There isn’t much confirmed about Dead to Me’s season 3 release date, spoilers or news, but we do know it will be back. After all, we need to know what happened to Jen and Judy after they almost died in a car crash.

Dead to Me season 2, which premiered on Netflix on May 8, followed Jen and Judy as they covered up the murder of Judy’s ex-fiancé Steve, who Jen killed at the end of season 1. Through flashbacks, we learn that Jen killed Steve by smashing his head with a wooden bird in her robe pocket. (She tried to shoot him with a gun but didn’t have any bullets.) After she made his skull bleed, Jen pushed him into her pool, where he drowned. When Judy arrived at Jen’s house, she helped her move Steve’s body to a locked freezer in Jen’s garage. After Jen’s garage is infested with rats, Jen and Judy bury the body in the Angeles Forest. Fast forward to the end of the season, and Jen confesses to Steve’s murder, and she and Perez drive to the Angeles Forest to dig up his body. When they can’t find where it is, Perez tells Jen that she won’t arrest her because Steve threatened her and there’s no body to connect her to his death. In the final moments of the season, we see a dog dig at the area where Steve’s body is buried. We also see Ben, Steve’s twin brother, receive an emotional phone call, which causes him to drink and drive and crash into Jen and Judy’s car. So, yes, there’s a lot of material for season 3. Find out more about it ahead.

Is there a Dead To Me season 3?

Netflix confirmed in July 2020 that Dead to Me is renewed for a third and final season. In a statement, creator Liz Feldman thanked stars Christina Applegate and Linda Cardellini, as well as Netflix for providing a platform for the series.

“From start to finish, Dead To Me is exactly the show I wanted to make,” Feldman said. “And it’s been an incredible gift. Telling a story sprung from grief and loss has stretched me as an artist and healed me as a human. I’ll be forever indebted to my partners in crime, my friends for life, Christina and Linda, and our brilliantly talented writers, cast and crew. I am beyond grateful to Netflix for supporting Dead To Me from day one, and I’m thrilled to continue our collaboration.”

Netflix’s VP of Comedy Series, Jane Wiseman, also called Feldman “a comedic force.” “We could not be more excited to expand our relationship with Liz and continue to work with her on Dead to Me and future series to come,” Wiseman said in a statement.

When’s the Dead to Me season 3 release date?

Though Dead to Me season 3 was confirmed in July 2020, there’s no release date announced yet. But if it is renewed, we expect the show to come out in May 2021. (May was when both season 1 and season 2 were released.) However, that release date could be pushed due to the 2020 health crisis, which shut down production on dozens of TV shows and movies. 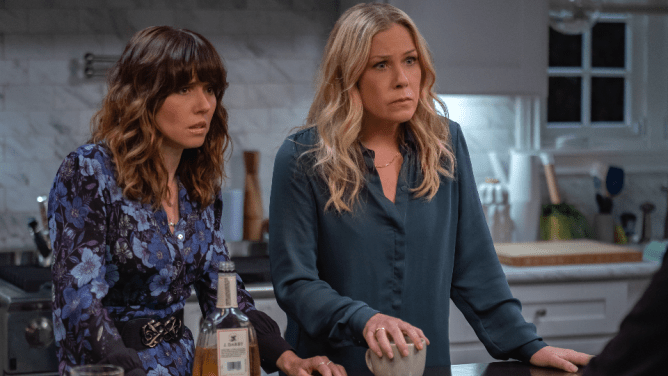 Who’s in the Dead to Me season 3 cast?

Netflix hasn’t confirmed the Dead to Me season 3 cast yet, but considering that none of the main characters died (that we know of) in season 2, we expect all of the central players to return: Christina Applegate (Jen), Linda Cardellini (Judy), James Marsden (Ben), Diana-Maria Riva (Perez) and Brandon Scott (Nick.) We also expect to see promoted roles in Frances Conroy (who played Steve and Ben’s mom) and Katey Sagal (who plays Judy’s mom.)

What will Dead to Me season 3 be about?

Given that season 2 picked up where season 1 ended, we expect the same from season 3. It it follows the same events, season 3 should follow Jen and Judy after the police find Steve’s body, as well as the wrath of Ben after he discovers that Jen and Judy killed Steve From the look of Ben after the car crash, it didn’t seem like he knew Jen and Judy killed Steve, but it seems like he found out that Steve is indeed dead. Perhaps season 3 will follow Ben as he feels sorry that he hit Jen and Judy until he discovers that they were the reason for his brother’s death.