Warning: Spoilers ahead for Dead to Me season 2. After Dead to Me premiered in May 2019, fans were desperate for Dead to Me season 2 spoilers and to find out the ending of Netflix’s latest dark comedy about a Orange County mom who commits murder. With season 2 available on Netflix now, we thought we would list the main twists and turns for those who are too stressed to watch. Fair warning, it’s a wild ride.

In case there was any doubt, Jen killed Steve at the end of season 1. Through flashbacks, we learn that Jen killed Steve by smashing his head with a wooden bird in the pocket of her robe. (She tried to shoot him with a gun, but didn’t have any bullets.) After she cracked Steve’s skull and caused it to bleed, Jen pushed him in the pool where he drowned to death. Jen killed Steve after he called her a “cunt” and suggested that her dead husband Ted (who Steve and Judy killed in a hit and run) wanted to divorce her and kill himself.

Steve Has a Twin Brother

At the end of the first episode of season 2, we learn that Steve has a twin brother, Ben, who looks identical to him, though Ben doesn’t consider them identical twins. (Yes, Ben is also played by James Marsden.) Ben is a nicer version of Steve who knocks on Jen’s door to look for his brother. Throughout the series, Ben becomes increasingly more worried for Steve. At first, he believes that his brother fled the country due to the money laundering he did with his art gallery. But then Ben starts to worry that Steve is actually missing, or even worse, dead.

At first, Jen and Judy keep Steve’s body in a locked freezer chest in Jen’s garage. But when Jen learns that her garage is infested with rats, who can smell Steve’s blood and bite through the freezer with their razor-sharp teeth (as explained to her by her exterminator), Jen and Judy decide to bury Steve in the Angeles Forest. (Jen was told about the forest by her son’s friend, Shandy, who told her that other bodies are buried there and are never found.) Unbeknownst to Jen, Judy carves a heart into a tree near where Steve is buried in case they need to find his body again. 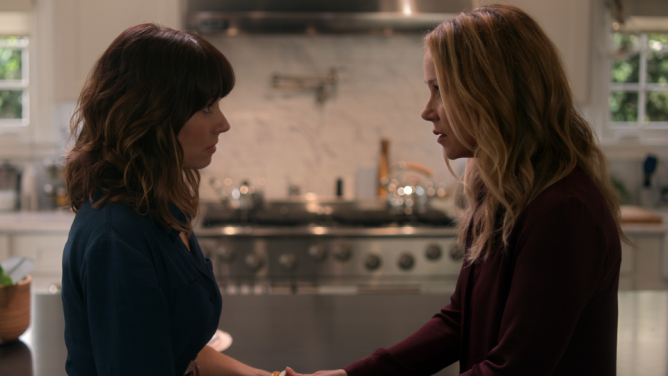 Jen and Judy drive Steve’s Mercedes to the Angeles Forest to bury his body. On the way back, they’re ticketed by a cop, which creates evidence of where they were. Jen and Judy hide the car in a storage unit, similar to the car that Judy drove in her hit and run with Ted in season 1. Jen’s son, Charlie, finds the car in the storage unit and thinks that it’s a surprise present from his mom, so he takes it on a joy ride with his influencer girlfriend, Carter, who posts photos of them on her Instagram. The two are also caught on CCTV cameras. After Jen learns that Charlie has the car, she burns it and bribes Carter to delete the Instagram photos. When Charlie learns that the car was Steve’s after seeing a photo of the car at Steve’s vigil, Jen tells him that Steve gave her the Mercedes as an apology for backing out of a real estate deal.

Judy & Michelle Have a Romantic Relationship

Season 2 introduces Michelle, played by Natalie Morales, the daughter of a woman at the retirement home where Judy works. After they become friends, Michelle and Judy develop romantic feelings for each other and have sex at Michelle’s apartment. Little does Judy know that Michelle’s ex-girlfriend is Perez (the officer investigating Ted’s death and Steve’s disappearance). That’s not all. Perez also lives with Michelle, which creates an awkward moment for Judy when Perez wakes up the next morning to see Judy in her kitchen. Despite Perez telling Judy to keep away from Michelle, Michelle and Judy continue to date. That is, until Perez tells Michelle that Judy is being investigated for the disappearance of her ex-fiancé and that Michelle could be Judy’s next victim.

Jen & Ben Develop Feelings For Each Other

Jen and Ben become close and kiss at the vigil to Steve. After Judy sees Ben and Jen kiss (keep in mind that Ben is Steve’s identical twin), she becomes disgusted at Jen. But the two work it out. The next day, Ben pretends to not remember the kiss because he was drunk, but he eventually confesses his feelings for Jen and the two have sex. Jen eventually breaks it off with Ben after she can’t stop picturing Steve’s face when they’re together.

After Charlie breaks up with Carter, she calls the police as revenge and gives them the photo of Charlie in Steve’s Mercedes, which leads Perez to believe that Jen’s oldest daughter killed Steve. When Jen learns this, she confesses to Steve’s murder and she and Perez drive to the Angeles Forest, so they can find Steve’s body. When they can’t find it, Perez and Jen head back to Laguna Beach. On the car ride, Jen confesses that she felt threatened by Steve and worried about her sons. Perez, who’s hurt because no one thinks she has a heart, tells Jen that she won’t arrest her because she feels sorry for her and there isn’t a body to connect her to Steve’s disappearance. The two agree to sweep the case under the rug.

In the final moments, we see a dog dig at the area where Steve was buried. (We know this because there’s a tree carved with a heart, like Judy said.) We then see Ben receive an emotional phone call, which causes him to drink and drive. In the final scene, we see Jen and Judy drive past a stop sign in her neighborhood, which was created after she petition to have a stop sign at a specific intersection due to Ted’s death. She believes that he may have lived if there was a stop sign to halt Judy and Steve. After celebrating that the stop sign was finally created, Jen and Judy slowly roll past it only to be crashed into by a speeding car. The driver of the car is Ben who has a bottle of alcohol in his driver’s seat. Ben flees the scene, and in the final seconds, we see Jen and Judy come to their senses as they realize they’ve been hit.