“We are not in Snow White. We’re in fucking Scarface,” Jen tells Judy in the Dead to Me season 2 trailer. Netflix’s dark comedy is less than a month away, and we have the Dead to Me season 2 release date, spoilers and news to quench your appetite for more murderous fun. But before we talk about season 2, let’s recap what went down between Jen, Judy, Steve (R.I.P.) and the rest of the kooky cast of characters in season 1.

Dead to Me, which premiered on Netflix in March 2019, follows Jen Harding (Christina Applegate), a real estate agent whose husband, Ted, was killed by a hit-and-run driver. Unbeknownst to Jen, the driver who killed Ted is her friend Judy Hale (Linda Cardellini), who befriends her at a support group meeting for widows. Judy’s ex-fiance, Steve Wood (James Marsden), is the once who convinces Judy to drive away after they hit Ted with their car and leave him for dead. Eventually, Judy tells Jen that she’s the one who murdered Ted, and the two have a nasty fallout. By the end of the season, they find their way back to each other. The season ends with Steve dead in a pool as Jen, who was last seen with a gun, stands over him. The show hints that Jen killed Steve, but could there be something else that happened. Tune into season 2 to find out.

Netflix announced in April that season 2 will be released on Friday, April 8. The second season will consist of 10 episodes.

The season 2 trailer confirms that both Applegate and Cardellini will return for season 2. It’s unclear if Marsden will come back (his character looked dead AF in the season 1 finale), but the trailer hints that he could appear in flashbacks. Other expected cast members include Max Jenkins as Christopher, Jen’s real estate business partner, Luke Roessler as Henry, Jen’s youngest son, , Sam McCarthy as Charlie, Jen’s teenage son, Ed Asner as Abe, a resident at the assisted living facility where Judy works, and Nick, a police officer.

The show will also see an increased role for Detective Ana Perez (played by Diana Marie Riva), who was tasked with the investigation of Ted’s hit-and-run but will soon shift her focus to the death of Steve. 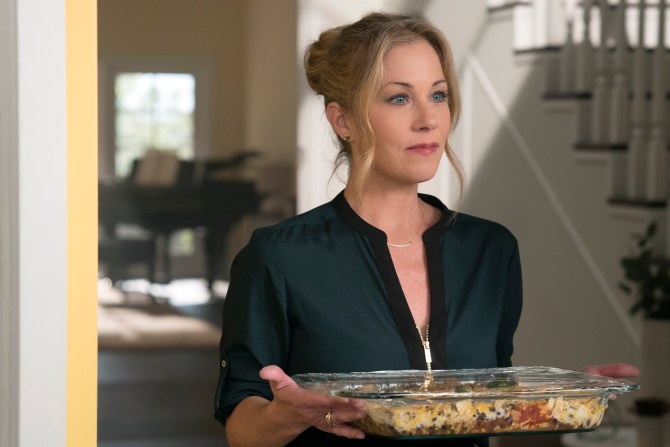 From the trailer, it looks like season 2 will follow Jen and Judy in the aftermath of Steve’s death. The second season will pick up where season 1 left off, with Jen and Judy looking at Steve’s dead body in the pool of Jen’s house. The trailer also shows Judy as she takes a mugshot, as well as a shot with Jen in some sort of gas mask (perhaps to protect her from the chemicals she used to get rid of Steve’s body?) Here’s the official description of season 2:

“Picking up in the aftermath of that bloody backyard reveal, the irrepressible pair once again struggles to keep their secrets buried. With a surprising new visitor in town and Detective Perez hot on their heels, Jen and Judy take drastic measures to protect their loved ones and each other — no matter the cost.”