Closer reported on Tuesday, August 10, that Schwimmer and Aniston, who played love interests Ross Geller and Rachel Green on the NBC sitcom, are in a romantic relationship months after they revealed their “crushes” on each other while filming the first few seasons of of the Emmy-winning comedy in the ’90s.

“After the reunion, it became clear that reminiscing over the past had stirred up feelings for both of them and that chemistry they’d always had to bury was still there. They began texting immediately after filming and, just last month, David flew from his home in New York to see Jen in LA,” a source told Closer.

The insider continued, “They’ve been spending time at Jen’s home, where she’s cooked dinners in the evenings, and have enjoyed quality time together, chatting and laughing. They were also spotted drinking wine, deep in conversation, as they walked around one of Jen’s favourite vineyards in Santa Barbara, where it was clear there was lots of chemistry between them.”

During the reunion, Schwimmer told host James Corden, “I had a major crush on Jen,” who replied, “It was reciprocated.” As for why the co-stars never dated, Schwimmer explained that their relationship never left the friend-zone because the two were never single at the same time. “We were both crushing hard on each other, but it was like two ships passing. One of us was always in a relationship and we never crossed that boundary,” he said. 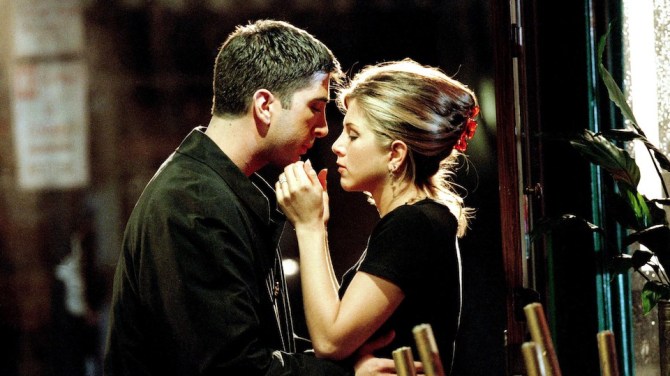 Aniston added,  “I remember saying one time to David, ‘It’s going to be such a bummer if the first time you and I actually kiss is on national television.’ And sure enough, it was. We just channelled all of our adoration and love for each other into Ross and Rachel.”

So are Jennifer Aniston and David Schwimmer dating? Well, according to Schwimmer, they’re still just friends. A representative for the actor told The Sun on Wednesday, August 11, that there’s “no truth” to the rumor.

During an interview on The Howard Stern Show in June, Aniston also confirmed that she and Schwimmer never had sex in Friends‘ 10 seasons. “I would proudly say I banged Schwimmer if that happened, but no,” the Morning Show actress admitted. “We were in relationships, and it was always never the right time. It wouldn’t have worked.”

She continued, “The beauty of that was that whatever feelings we had we just literally channeled everything into Ross and Rachel. I think that’s maybe why it resonated the way it did. We never [did], on my life,” she told host Howard Stern. “And [Courteney Cox and Lisa Kudrow] would know [if we did] because they would’ve heard about it. They can vouch for me.”

Friends: The Reunion is available to stream on HBO Max. Here’s how to watch it for free.