It’s been over 25 years since Scream, yet David Arquette’s net worth is still benefitting from his time in the slasher film franchise. In fact, his salary has only continued to grow with each new Scream movie—and the same can be said for the latest installment.

Before rising to prominence with Scream, Arquette—who was born in September 1971—was raised in a commune near Bentonville, Virginia. Arquette‘s mother Brenda worked as a therapist, actress, poet and acting instructor, while his father Lewis was an actor. He grew up with four siblings: Patricia, Rosanna, Alexis and Richmond, who all ended up becoming actors as well. His sister Alexis, however, unfortunately died in 2016 after suffering a heart attack after living with HIV for decades. Arquette and his siblings had a turbulent childhood; their father was an alcoholic, whereas their mother was often abusive. In 1997, their mother died of breast cancer.

As a child, Arquette had a bad streak—he began shoplifting as a youngster and drinking alcohol when he was only 12 years old. By the time he was a teen, his family had relocated once to Chicago and again to Los Angeles, where he attended high school at the Los Angeles Center for Enriched Studies. After graduating, Arquette began pursuing his career in television in film. In 1990, he made his television debut on Fox’s The Outsiders and started a 12-episode run on NBC’s Parenthood. The following year, he starred in the thriller film Where the Day Takes You, which was followed by Cruel Doubt and Buffy the Vampire Slayer in 1992, and An Ambush of Ghosts, Grey Knight and At Home with the Webbers in 1993.

Arquette went on to co-star in the 1994 comedy Airheads alongside Adam Sandler, Brendan Fraser and Steve Buscemi and land guest appearances on series like Friends before landing one of his biggest roles to date. In 1996, Arquette starred as Deputy Dwight “Dewey” Riley in Wes Craven’s horror classic Scream. The film—which remains the highest-grossing slasher film in decades—launched an entire franchise starring Arquette and other original cast members such as Courteney Cox and Neve Campbell in a series of sequel films, including 1997’s Scream 2, 2000’s Scream 3, 2011’s Scream 4 and 2022’s Scream, otherwise informally known as Scream 5. For his role in the film series, the actor has landed a number of awards—and Arquette’s net worth has certainly reaped the rewards, too.

So, what exactly is David Arquette’s net worth today? For everything we know about how much David Arquette has earned from his role in the Scream franchise and more, just keep on reading below.

How much did David Arquette earn from Scream? 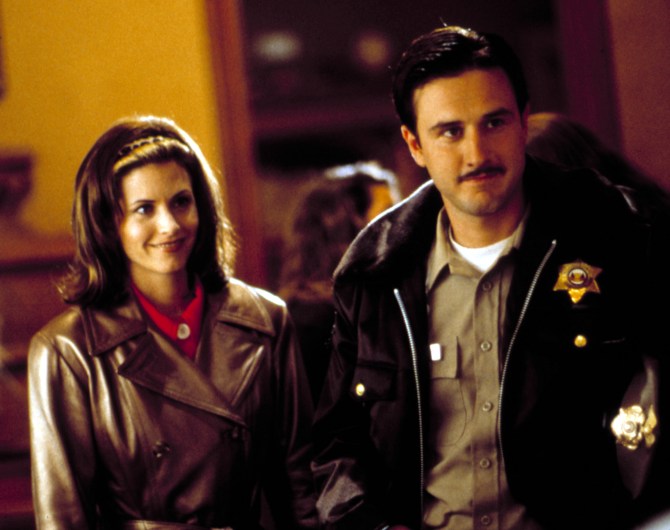 David Arquette has starred as deputy Dwight “Dewey” Riley in every installment of the Scream franchise to date, earning millions along the way. But what is Arquette’s Scream salary, exactly?

When Scream premiered in 1996, the film was instantly a triumph—both financially and in terms of critical reception. The first film in the series generated over $173 million at the global box office, making it the highest-grossing slasher film until the release of Halloween in 2018. In 1997, Arquette reprised his role in Scream 2, which grossed over $170 million at the box office. Scream 3, by comparison, made slightly less when it premiered in 2000. The film brought in over $160 million and marked a temporary end to the saga until the franchise’s return over a decade later with 2011’s Scream 4. The fourth film in the Scream franchise earned over $97 million at the box office.

While Arquette’s take-home pay from each of the films in the franchise has yet to be publicly reported, co-stars like Cambell earned a combined $9 million on the first three films, according to TheRichest—so it’s possible that Arquette’s salary was somewhere within that range, if not higher given his previous success before signing on for the first film.

After four Scream films, Arquette revealed to Collider in 2021 that he was the “first one” to jump on board when it came to reprising his role once more despite the difficult loss of the franchise’s director, Wes Craven, who passed away in 2015.

“I was the first one to jump on board because I do love playing this character,” Arquette explained. “I love horror films and I loved the script and I saw Ready or Not and was just blown away by what Tyler and Matt had done with that so I knew we were in good hands,” he added, referring to Scream 5 directors Tyler Gillet and Matt Bettinelli-Olpin.

Still, Arquette notes that there were “hard” moments for the cast after Craven’s death. “It’s definitely hard not having Wes here and having the crew that had done all the previous films. So that was really kind of, not painful but just emotional,” he told the publication. “But they have incredible filmmakers and the script is really exciting and scary, super scary, and it really does have a love for horror films and the Scream films that have come before it. But as far as playing the character, it’s weird because I have played him for so long. There are certain things that I can just kind of go back into relatively easily.”

Though David Arquette’s Scream 5 salary has yet to be publicly reported, we’d wager to say that he’s earning a significant paycheck based on the massive box office earnings and salaries from the previous four films in the Scream franchise to date.

What is David Arquette’s net worth?

According to Celebrity Net Worth, David Arquette’s net worth is $30 million as of 2022. This accounts for Arquette’s salaries from each of the Scream franchise films, along with his earnings from earlier projects like Buffy the Vampire Slayer and guest spots on shows like Beverly Hills, 90210 and Friends. By comparison, his ex-wife and fellow Scream co-star, Courteney Cox, is worth a whopping $150 million as of 2022. Now, while Arquette’s exact salary for the Scream films is unknown, it’s clear that he has steadily earned more throughout his decades-spanning career—and that trajectory isn’t stopping any time soon.

Scream 5 premieres in theaters on January 14, 2022. You can get tickets here for your local showings. Plus, here’s how to watch the Scream movies in order for free.