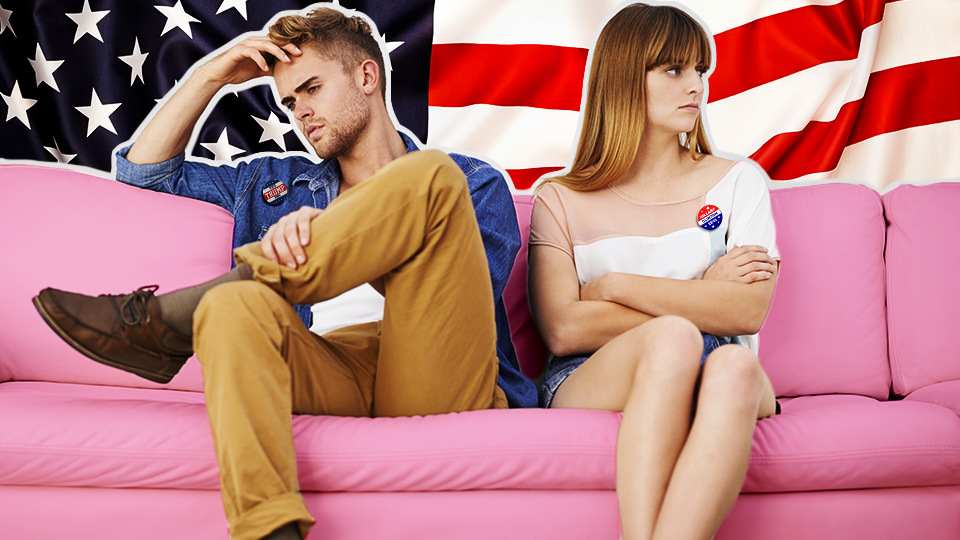 “No matter how hot, cool, or smart a guy is, I’d end a date if I found out he supported The Donald,” says my friend Allie, a single 28-year-old start-up marketer in New York. “I hate getting into fights with people about politics!” That’s saying something coming from Allie, who majored in government at a liberal arts college and is no stranger to a scrappy debate. But her attitude reflects a deeper truth that gaping political differences can be a dividing, and sometimes even a deciding, factor in dating and relationships.

That’s especially true when it comes to the crazy-contentious issues and candidates of this particular presidential election. “What’s happening in our country right now is a new, unique situation,” says marriage therapist Tara Fields, Ph.D., author of The Love Fix, who says that she and her colleagues have noticed a recent uptick in the number of couples dealing with political differences. “Everyone is triggered by the current political climate, which has exposed an underbelly of misogyny, racism, and other issues in America. But when couples disagree, it’s not really about who you’re voting for—it’s about the values that candidate represents.”

Jack, a single 29-year-old New York–based software engineer and die-hard Bernie supporter, says he uses politics to gauge long-term romantic compatibility. “I could hook up with a Republican, but I could never, ever date one, because that would severely downgrade my opinion of them,” he says. “I would date a Hillary supporter, since I consider her sort of a moderate Republican, unlike real Republicans.” Jack also says it’s a turn-on when a prospect’s politics align with his. “That solidifies my faith in their intelligence, and it confirms that we have similar values, world views, and morals.”

No matter what your views are, it’s not a bad idea to use politics as a filter when looking for a partner—especially if there are issues you’re super-passionate about. “Be a good consumer when you’re dating,” says Fields. “After seeing someone a few times, ask a casual question or throw out a hint about your beliefs to see how they respond. If you find out your opinions are at odds, you can stop seeing each other now, before you’ve gotten in too deep.” She even suggests adding a funny quip to your online dating profile that makes it clear where you stand, to save time and cut through the politically incompatible riffraff. (“Drumpf fans swipe left.”)

But not everyone needs to be perfectly politically compatible to have a healthy relationship—look at high-profile political commentators James Carville and Mary Matalin—he’s a die-hard Democrat and she a staunch right-winger—who’ve been happily married for two decades. For many couples, some contention about politics can work, and even spur healthy, mind-opening conversations.

That’s the case for Tegan, a right-leaning 29-year-old ad client services manager who’s dating a fiercely independent 27-year-old sales manager. “I always thought I’d be with someone who had the same beliefs as me, but I like that I’ve found someone with different opinions who can challenge me in a good way,” she says. “There are times when we both get defensive, but we talk through it, and it’s made us into more informed voters.”

When the differences are too extreme, though, it can spell trouble—or even a breakup. Laurel, a 27-year-old consultant in Berkeley, California, and lifelong Democrat, dated a hyper-conservative guy for two years in college. “We were together during [President] Obama’s first election and he wouldn’t tell me who he’d voted for,” she says. “The following summer, he visited me while I was studying abroad in Paris, and we were having this romantic evening under the Eiffel Tower when he told me he’d actually voted for [John] McCain. I was so furious, I almost broke up with him right there.”

She didn’t, but the issue did contribute to their eventual split, she says. “I couldn’t see myself raising kids with someone who claims to care about certain human rights and values but then votes for a party that disregards those values.”

If you’re already deep into a relationship with someone whose politics differ vastly from yours, there are ways to keep it from wrecking your connection. Don’t talk about loaded topics unless you’re feeling calm and able to have a curious, open mind. “Let your partner know that you’re trying to understand their point of view,” says Fields. “Ask for clarification without judgment or anger. These are crazy political times, and your partner may still be working out their own beliefs.”

But if tensions are already running higher than a “Bachelor” finale, she suggests a “political blackout,” where you don’t watch news or debates—or discuss politics at all—for a week or two. Use that time to do your favorite things together that bring out the loving feels. One thing not to do, according to Fields, is swallow your feelings and avoid the issue—it’s always better to talk about it, even if it’s tough.

One couple who seems to have it all (or mostly) figured out: My friend Sophia, a 29-year-old writer and editor, and her husband, Jeffrey, a 31-year-old HR manager. He’s a Republican, and she’s socially liberal and passionate about news and social issues. “We’ve been talking a lot about politics this election cycle,” Sophia says. “I’m naturally stubborn, and I think it’s a cop-out when people ‘agree to disagree.’ If you believe in doing the right thing, it’s important to challenge your beliefs with logic; and if they don’t hold up to logic, it might be time to adjust them.” Fair enough—but how does her husband handle the heat?

Humor and sarcasm, says Jeffrey. “That’s how I typically deal with disagreements. I find it fun to ruffle her feathers by pretending to support the other side sometimes,” he says. “Ultimately, I think it’s important for people to engage with politics with their partner—by being flexible and exploring those beliefs respectfully, it can really strengthen the relationship.” That’s some serious #relationshipgoal wisdom. You guys taking notes?