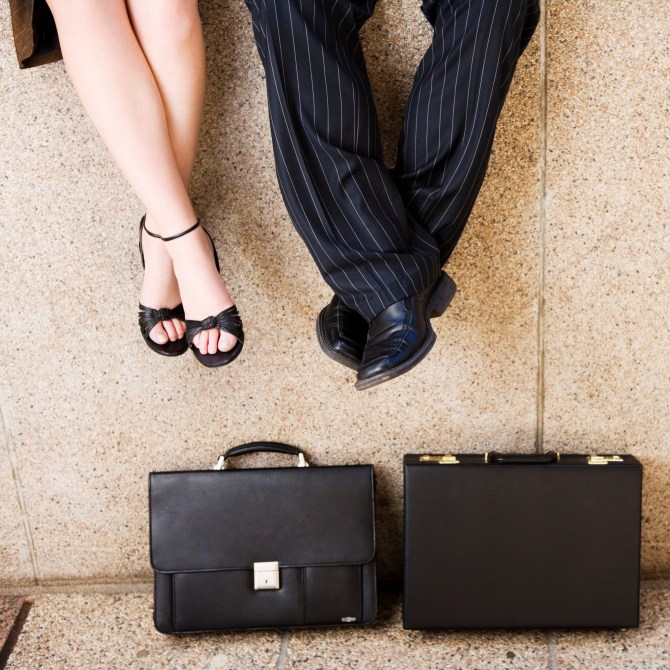 Is it just you, or is that guy that you awkwardly stumbled into on your first day on the job getting cuter by the minute? Did he get a new haircut, or switch up his wardrobe? Probably not, according to a British survey conducted by the CBS network. Of the 2,000 men and women surveyed, 14 percent of couples that met through work ended up getting married, compared to 11 percent that were first introduced by mutual friends.
A CBS spokesperson explains how couples that meet in the workplace already have similar interests, and that close-friendships-turned-relationships are almost inevitable — despite how much supervisors typically frown upon them. Is familiarity breeding contempt, or do these office romances hold the key to lasting love?
We surveyed people who’ve mixed business with pleasure to find out what they learned from hooking up with a co-worker.

1. Be Clear Of Your Expectations
When you throw ‘nearly naked on a daily basis’ into the whole proximity and common interest mix, there’s almost a sure-fire chance that a hookup is brewing. Shelby spent the past few summers life-guarding at her town pool to make some extra cash, but after a one night stand, what she ended up with was an awkward three months. “A guy I worked with had been asking me to hang out after work a lot, and the only time that I let it happen was at a party with all of our co-workers together,” she said. “I hooked up with him that night, thinking it was meaningless, while he was clearly entertaining other ideas.”

Shelby’s poolside flame wasn’t exactly thrilled with her lack of interest over the next few weeks, and made it clear to everyone that she was “the bad guy” in the situation. Shelby’s advice? If it’s just a hookup, it might not be worth it. “Honestly,” she said, “if you have to see someone everyday, and one person expects more from the other, it creates an air of animosity that will make doing your job super uncomfortable.”

2. Infatuation Can Be Blinding … So Be Wary Of Letting It Guide You
When Nicole moved across the country last year looking for a blank slate and a new start, she had no idea that all of her “firsts” would be shared with someone else. She had moved in with a friend-of-a-friend, and because she was new to the area, he hooked her up with a job at the restaurant he worked at. Between work flirtation and adjacent bedrooms, the two quickly found their friendship escalating to something more. “At first it was awesome, because when you’re in the beginning phase of a new relationship, you just want to be with that person all the time,” she said. “Normally, you have separate jobs and houses and friends, but we shared all of those things.”

Nicole began to realize that having a boyfriend who also shares the title of co-worker and permanent house-guest was causing more harm than good. “It was great for about five minutes,” she said, “until we began to bring our work fights home and our home fights to work. We ran out of things to talk about, and just got on each other’s nerves all the time.”

They decided to break up the living situation a bit by inviting another friend of Nicole’s to move in around seven months into the relationship, but the fix didn’t last and they broke up a few months later. “When you date someone you work with, you have to know that you’re at risk of everyone knowing the personal details of your relationship and having them gossip behind your back,” Nicole said. “And too much time spent together kills the spark.”

Find out more valuable lessons over at YourTango.com!

More on YourTango:
The 5 Most Epic Love Triangles Throughout History
8 Modern Dating Rules Every Single Should Know
Love: Tips & Expert Advice On YourTango