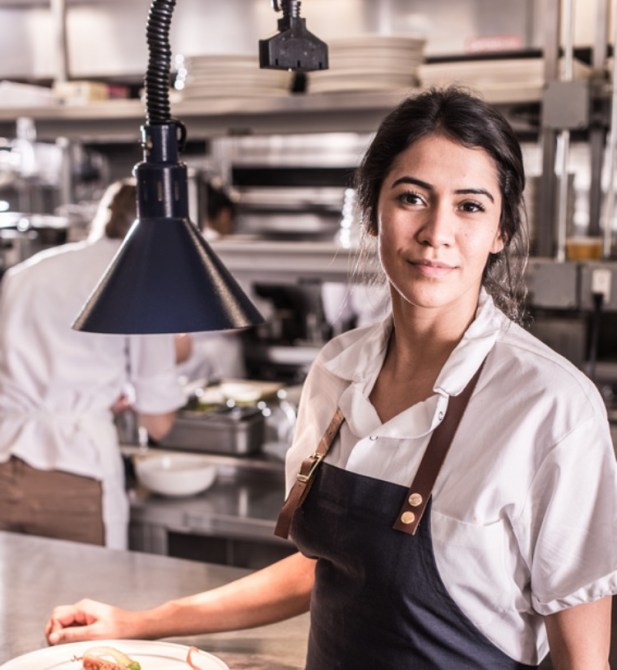 At 25 years old, Daniela Soto-Innes is already the chef de cuisine at acclaimed New York Mexican restaurant Cosme, was named a James Beard Foundation Rising Star earlier this month, starred in a Tribeca Film Festival documentary about her life and career that screened this spring, and will be helping Cosme’s owner, Enrique Olvera, open a new restaurant in the city’s Noho neighborhood.

We caught up with the rising star to talk about what it’s like being a young woman in the notoriously male-heavy culinary world, how it feels to be poised for stratospheric success at such a young age, and more.

STYLECASTER: How do you feel about being named a Beard Foundation Rising Star?
Daniela Soto-Innes: I was very surprised. I couldn’t believe it, especially because I’m a person who always looks out for everyone else rather than myself. Receiving that recognition was great. My career hasn’t really changed as a result so far—I think eventually there will be higher expectations and more stress, but I’m just enjoying it for now.

What was it like to star in a Tribeca Film Festival documentary about your life?
“La Cocinera” is a 10-minute film about the story behind my career, including my family. It was definitely a different experience being filmed, but at the end of the day, it was really fun. The film was screened during this year’s Tribeca Film Festival, but it hasn’t been released yet for public viewing.

MORE: The Only 8 Tips You Need to Make a Perfect Burger

What’s a major lesson you’ve learned about growing your career?
I took my first chef job when I was 19 and didn’t know how to delegate yet, so I did everything myself. I used to wake up at five in the morning because I felt like if I didn’t do it, it wouldn’t get done. That works for a while but not forever. I learned if you want to move up, you have to teach people how to do things and make sure everyone around and under you succeeds.

How have women influenced your journey to becoming a chef?
My mother and great-grandmother were great cooks. My mom took a lot of cooking classes. My family definitely helped develop my original interest in cooking.

Do you feel that being a woman has affected your career?
I hate that question. When I was growing up, my father was a basketball player, and he encouraged me and told me that women could do things just as well as men. Not long ago, a journalist asked Enrique Olvera why he hired a woman, and he said he hires people because of their talent, not their gender. I agree with that.

MORE: Pro Tips for Hosting an Elevated BBQ This Summer

Any advice for women looking to make their way up the ladder in the food industry?
Don’t try to move up too fast. I know I’m super young, but I started cooking when I was 14, and I’m so happy I took my time. I made sure I learned from the chef and never said no to opportunities. You can’t say no in the kitchen.

What’s your current favorite item on the menu at any of your restaurants?
Right now, the soft-shell crab at Cosme. It’s fried in yellow-corn tempura and it’s on top of yellow mole with dried Mexican chiles on top.

What’s your favorite food?
Tacos with suaveio, which is a part of brisket that butchers usually don’t like because it’s extra fatty. It sounds horrible, but it’s so good—and cheap. I like to eat it with avocado and lots of lime.

What future project are you most excited about?
In the short-term, I’m most excited about the new restaurant the Cosme team is opening in Noho at the end of the year. In the long-term, I want to start a culinary school for little kids—but that’s very long term. I also want to open a Mexican butcher shop with great chorizos and other great Mexican ingredients.

MORE: Find Out Why Iliana Regan Is Chicago’s Coolest Chef