Dangerous Lies, which premiered on April 30, follows Katie Franklin (Mendes), a young woman who loses her waitressing job takes a gig as a caretaker for a wealthy elderly man. She works for him for four months until he unexpectedly dies and leaves Katie as the heir of his sprawling Chicago estate. Katie and her husband move into the home, where they discover that the mansion houses more secrets than they can hold. Soon after the death of Katie’s employer, Katie and her husband, Adam Franklin, come across a chest of cash filled with $100,000.

Later, they start to hear footsteps throughout the house before discovering a dead body in the crawlspace above the mansion’s garage, as well as a bag of diamonds. As they uncover more secrets, a detective is on the tail of Katie and her husband to try to solve the death of her employer. Did he die of natural causes or was it murder? Find out if Katie (a.k.a. Camila Mendes) makes it out alive with the spoilers ahead. 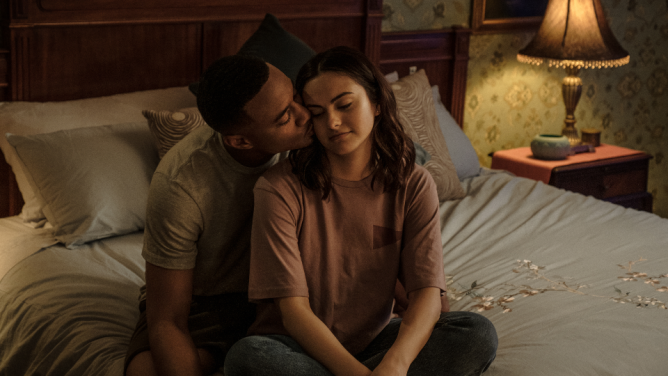 Soon after Katie starts to work the elderly man, a realtor named, Ben Hayden, knocks on the door of the house to tell her that he has a client who’s ver interested in buying the mansion. When Katie tells him that the house isn’t for sale and that it’s unlikely her employer will sell it, the realtor continues to persist and gives Katie his card. When Katie inherits the house, Ben returns. Katie finds him in the front yard of mansion, looking at the garden. The realtor once again asks if Katie will sell the home to his client, but she tells him no and shoos him away.

So who is this mystery realtor? Well, he’s actually a criminal who robbed a jeweler of $3 million worth of diamonds several years ago. Katie finds this information out after her husband Googles the realtor’s name and finds out he’s not an actual realtor. For the robbery, Ben worked with a partner named, Doyle, who got away with the diamonds and left Ben to rot in jail for a few years before he was released and went on the hunt for his ex-partner and the diamonds.

Where are the diamonds?

While at the house, Katie discovers a dead body in the crawlspace above the garage. With the body is a big filled with diamonds. She soon learns that the dead body is her employer’s former gardener, Doyle, who went missing and stopped showing up to work. Katie’s employer was led to believe that Doyle quit, but what really happened was Doyle was chased into the crawlspace, where he was murdered by Ben. As you can deduce, Doyle was Ben’s partner in the $3 million diamond robbery, and once he found him, he killed him. But before Ben could search Doyle for the diamonds, the police arrived, which led Ben to flee the scene and the diamonds to stay in the house.

What’s with the lawyer?

Halfway into the film, a mysterious lawyer played by Jamie Chung is introduced. She tells Katie and Adam that Katie’s employer wrote a will before his death, which left Katie with his entire estate. We learn later that the will is forged by the lawyer, who was also the attorney of Ben when he went to jail for the $3 million diamond robbery. While the lawyer and Ben worked together, Ben promised his lawyer that he would split the diamond money with her if he found it and she worked to release him from prison early. Throughout the movie, the lawyer tells Katie that she could lose the house if she withholds any information about what she found there, which is why Katie tells her attorney about the diamonds. The attorney then becomes weirdly obsessed with Katie and the diamonds and even convinces her that Adam will leave with the money and frame her for her employer’s death, which is why Katie needs to get a hold of the diamonds immediately. 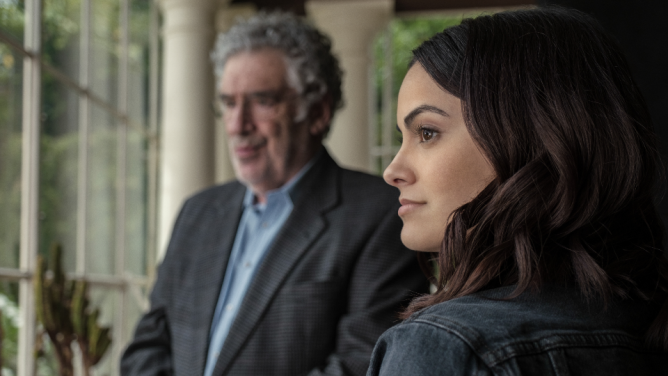 How does it end?

In the final 20 minutes of the movie, Katie finds out that Adam had taken the $100,000 in cash and the diamonds. Her lawyer tells her to find Adam before he runs away with the money and frames her for the murder of her employer. When Katie returns to the house, she runs into Adam, who’s packed the money in a bag and tells her that they need to run away because the detective will never believe that they didn’t kill Katie’s employer and that the $100,000 is enough for them to start anew. That’s when Katie realizes that Adam isn’t the bad guy in the situation and is still on her side. Adam also tells Katie Ben’s real identity. As Katie leaves the bedroom and walks into the hallway, she runs into Ben, who’s broken into the house. He takes Katie hostage with a gun and starts a shootout with Adam.

In the end, both Adam and Ben die in the shootout, which is when Katie’s lawyer shows up at the house to find Katie over Adam’s dead body. She tells Katie that she needs to find the $3 million in diamonds otherwise the police will blame her for everything that’s happened. That’s when Katie realizes that she never told the lawyer how much the diamonds were worth. Katie’s lawyer then explains who she really is and takes her hostage with a gun. The detective then shows up at the house and shoots the lawyer dead. The detective tells Katie that they’ve solved the case and that the lawyer and Ben were the ones who drugged Katie’s employer, so he overdosed and died. The scene ends with Katie telling the detective that she still has no idea where Adam hid the diamonds. Fast forward to several months later, and Katie is pregnant with Adam’s baby. There’s a shot of her gardening. As the camera pans away, a sprinkler waters the soil, which shows that the diamonds were hidden in the garden.