Most of us know Cynthia Rowley as the icon behind the east coast brand, donning bright colors and eccentric patterns. She’s a designer whose personality shines through in everything that she does. What most of us (including myself) don’t know about Rowley is that she’s got a few hidden talents up her sleeve, more specifically, her stellar surfing skills. As the Social Media Editor here at STYLECASTER, I was lucky enough to get a closer look at this side of the designer during her annual Cynthia Rowley Surf Camp. And, frankly, it left me reflecting on life as I know it.

Once each year, the designer invites a number of girls out to Montauk, New York to participate in an unforgettable few days at Surf Camp—AKA the place where Rowley’s daughter, Kit Kennan, took to the waves in high heels, landing her a spot as a contestant on ‘The Bachelor’. While our group skipped on the heels (this time), we did learn to surf with the help of Rowley, Keenan, and a few instructors.

As we stumbled off of the bus early Monday morning, none of us could have anticipated what was in store for us over the next 48 hours. We began at the Cynthia Rowley store in Montauk, stocked from wall to wall with colorful wetsuits created by the brand itself. Unlike your traditional wetsuit, the label features suits in patterns and colors equally as bold and fun as the rest of her designs. From color-blocked looks to floral prints—the dozens of designs are a great excuse to let your personality shine through while you take to the water. Whether or not those wetsuits made our surfing abilities any better is up to interpretation, but I’d like to think they played at least a small part. After each of us found the perfect fit and zipped each other up, we took to the beach to start our lesson. 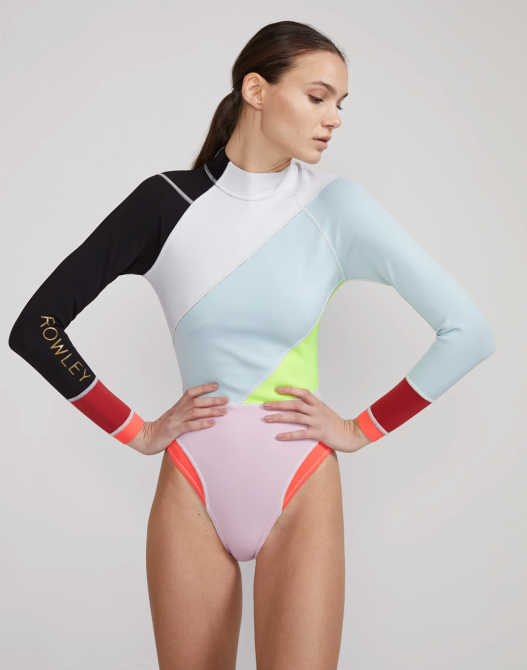 As someone who had never been to Montauk before, our walk onto the beach was nothing short of a pinch-me moment. With cliffs spanning the length of the beach and soft, tanned sand—it felt like we were far away from New York for that moment in time. We followed Rowley down the coast and met up with our instructors to get to work. Starting with drills on the sand, they taught us how to jump up on the board once we got out on the water and talked through what to expect. It took a few minutes to get comfortable enough to get into the movements but after a while, we were all anxious to get into the water and see if we had what it took to get up on our boards.

While the first group of girls headed out, the rest of us hung behind to wait for our turn—which ended up being the best decision we could’ve made all day. We struck up a conversation with Cynthia Rowley, herself, and chatted with the designer about her love for surfing. She went on about how she had never even picked up a board until she was in her mid-thirties, but how it’s changed everything she does since that moment.

She’s fallen in love with the waves and has turned the occasional activity into her daily routine. Rowley raved about how important it’s been to find something that she can constantly work on improving at, visibly seeing the results of the time and effort she’s put in. “It’s addicting”, she said. The designer told us, specifically, how her experience with surfing has changed the way she looks at life as an adult—realizing that there’s no point in our lives when it’s too late to pick up something brand new (and be great at it, at that).

While Cynthia continued on about the high she gets from surfing, she assured us there’s even more to it than the adrenaline-inducing waves. As an iconic designer, Rowley has traveled the world for her job—surfing gives her a reason to travel outside of work. There are so many amazing experiences that have amounted from her role in the fashion industry, it’s far different traveling for something you love doing in your spare time. From surfing on the Mediterranean Sea to the Pacific Coast of California, there weren’t many places that Rowley hadn’t sought out just to catch a few waves.

As we continued listening in to Rowley’s outlook on life—it struck a chord. As adults, it’s easy to get caught up in the work you do and the regular rhythm that comes with every new day, the mundane tasks we all have to get done and check off of our lists. But what are we really living for if we’re not constantly seeking new experiences that make us feel truly alive? The way Rowley continued to elaborate on how surfing changed her life as an adult, was a rare reminder that each of us could do well to find something in our lives that’s worth working hard for (that doesn’t include our next promotion).

The sense of self-confidence and fulfillment that comes from achieving a goal set by you and for you is unrivaled, it feels unbelievably personal. And yet, it seems like those moments with ourselves are far and few between. In a world where we dedicate so much of our daily lives to fulfilling other people’s needs, it’s important that we take a step back and look at what we need. Especially as life gears up again, nearing the end of a year’s worth of canceled plans and time spent with ourselves, it’s more important than ever to remember what we’ve learned in that time and take that we take it with us back into ‘regular’ life. Just by watching Rowley, you can tell that she does exactly that—dancing the night away in silk pajamas, hosting a dinner for her guests—the designer was the star of her very own show and welcomed anyone willing to join along for the ride.

With that, I just have to say—thank you, Cynthia Rowley.