This year, the Golden Globes looked a little, well, different—and by that, I mean a good chunk of the award show was completely virtual. Nominees weren’t able to attend in-person, so it was up to the live presenters to serve all the fashion. Luckily, Cynthia Erivo’s Golden Globes look was better than a full-on pre-show red carpet.

Although Erivo isn’t nominated for a Golden Globe this year, our queen has won an Emmy, a Tony and a Grammy, so she’s no stranger to award show victories. That said, tonight Erivo took the stage to present an award to someone else, although she still ended up stealing the show in the process. No surprise there; Erivo has become quite the fashion icon over the past few years. Who could forget her dramatic white gown and Starry Night-inspired nails from last year’s Grammys!

And of course, her look for last year’s in-person Golden Globes was equally stellar. Erivo wore a custom black Thom Brown gown with white collar detailing. That said, she was nominated for two awards last year—Best Performance by an Actress in a Motion Picture Drama for Harriet, as well as Best Original Song in a Motion Picture for Harriet’s “Stand Up.” I wasn’t sure if she’d dress down this year, seeing as she wasn’t nominated, but I should’ve known a fashion icon like Erivo would still rise to the occasion. 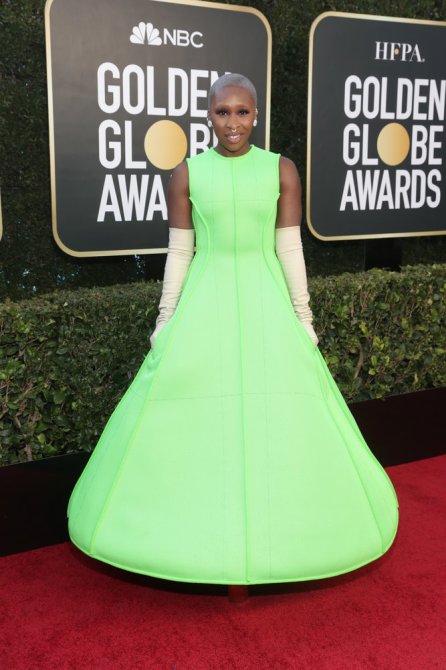 This year, Erivo wowed in a lime green a-line dress from Valentino’s Spring/Summer 2021 collection. How freaking fabulous! She styled it with mirror-like platform heels and long satin gloves, plus glitzy Wempe Jewelers earrings, a statement nose ring and a pop of purple liner to top it all off. How chic! So many celebs tend to go classic for award shows, so I love that Erivo is bold enough to go funky with this fun Valentino piece. These photos doesn’t do it justice, but it was indeed neon AF when she took the stage to present. 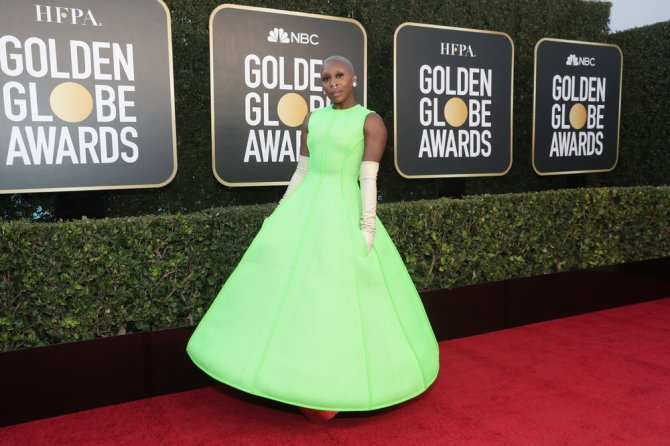 Everyone who attended this year’s Golden Globes (IRL or virtually) looked amazing, but like I said earlier, our queen went all out for us! And given that award shows have been so dull thanks to (necessary!) pandemic precautions, I couldn’t be more grateful. Here’s hoping Erivo and other celebs can walk a real red carpet (safely!) sometime soon, but until then, this slay will certainly hold me over.