Cynthia Bailey has been through the “peaks and valleys” in her decade on The Real Housewives of Atlanta, but she isn’t ready to give up her peach anytime soon.

“I’m here until it doesn’t make sense for me to be here anymore,” she tells StyleCaster. “This show has been an incredible journey for me. But I know nothing lasts forever, so if I do decide to move on, I know it will be a respectful transition because I have a great relationship with the network.”

Cynthia joined Bravo reality TV series in season 3 and is one of the longest-standing Housewives to remain on the show after the exit of original Housewife Nene Leakes in 2020. “One of the things I’ve learned at this point is the show is evolving in a way that enables new blood to come in and old blood to come back and forth as the network wants them to,” Cynthia says. “You can be a peach holder one week and a friend the next week. The evolution of the show is pretty much the old, the new and mixing the old with the new.”

Cynthia is one of five Housewives on the current season of RHOA, alongside Kandi Burruss, Porsha Williams, Kenya Moore and Drew Sidora. According to Cynthia, season 13 of RHOA, which was one of Bravo’s first shows to film during a pandemic, is unlike anything Housewives viewers have seen before. “First, this season is different because we shot it during a pandemic. That just changed everything,” she says. “We are all very much involved in the Black Lives Matter movement. That changed everything. This is a Black ensemble cast at the end of the day. As Black people, we are all very much affected and wanted to show how we were doing with the movement.”

Ahead, Cynthia talked to StyleCaster about season 13’s much-anticipated Stripper Gate, the cast member she hasn’t spoken to since filming and her reaction to Nene shading RHOA’s current ratings. 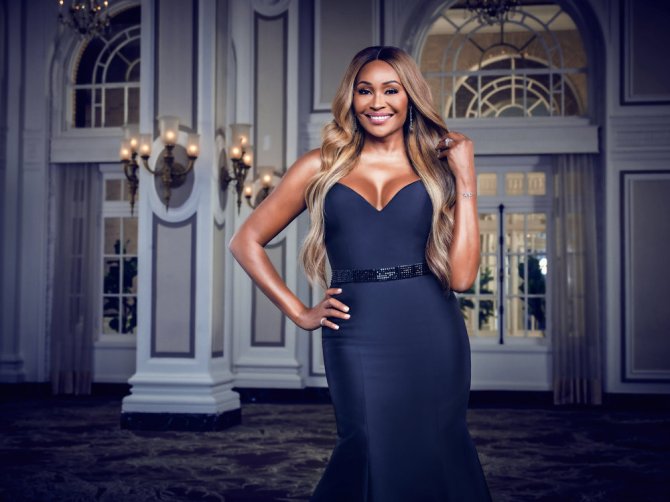 On how she was cast on RHOA

“About almost 12 years ago, I relocated from New York City to Atlanta to be with my ex-husband. Me being my Pisces self—fearless and not afraid of change—it felt right at that time. I moved there for the purpose of my relationship. However, I kept getting approached about The Real Housewives of Atlanta. Different people that were casting kept trying to reach me. At that time, it was season 2. I came on season 3. Honestly, not a big drama kind of girl, I didn’t personally see how I would be a good fit for the show. However, my ex-husband did convince me to just take the meeting and see what it was all about. A meeting turned into a second meeting, which turned into a screen test. From there, it ended up happening. I came on with Phaedra Parks. At the time, they were very interested in Phaedra. What they told me at the time was, ‘We want to shoot both of you, and whoever has the stronger storyline will be the Housewife and we’ll take the other one as a friend.’ I was like, ‘Sure. Whatever.’ I didn’t even know what a storyline was at that time. I came from the fashion industry. Storyline? OK, I guess I just show my life, right? As you’ve realized, Phaedra and I are two very, very different people and had two very different lives and stories. They ended up taking us both as Housewives. I’ve been on the show for over a decade now.”

“I don’t read too much into what anybody has to say who’s not a part of the show. The ratings go up, they go down. That’s the world we live in. Most people don’t even have cable anymore. Television, as we know it, has changed. All I know is Atlanta has been consistently the number one show for a long time. This is not the first time Nene hasn’t been involved in the show. We were able to push on and move forward. I don’t believe one person makes or breaks the show. If that’s the case, then I would think the network would be clamoring for that one person to do their own show if they had that much value on their own.”

On why Bravo didn’t film her wedding

“The network told me early on that, dependent on what was going on with the pandemic, they may not be able to film it. If my concern was to make sure the show filmed the wedding, I would’ve postponed the wedding and had it 2021 or 2022 when I knew they would be able to film it. I was well aware and had many conversations with the network of the legality part of what filming had to look like with a production crew. At some point, Bravo had to make a decision whether they would shoot it or not and they told me plenty enough in advance to cancel the wedding if I wanted to. I’ve been married on the show before. This is not my first rodeo. For me, it’s no big whoop to get married on the show. Been there. Done that. Bravo would’ve been very happy for me to say, ‘Hey, let’s save it and do it later when we could actually be there.’ My husband and I were the ones who decided to move forward and have the wedding whether or not they were able to shoot it.”

On what fans can expect from Stripper Gate

“Was I surprised? Yeah. Did we all have a great time? Yes. It was a bachelorette party. Kandi knows how to throw a hell of a party. These girls know how to have a good time. These are all grown ass women in this cast. At the end of the day, whatever they decide to do is on them. It’s their business. However, if anything is done while we are together as a group filming, we’re going to talk about it. That’s part of the show. We’re going to talk about it. Was I surprised by some of the things I heard the next day? I was. I wouldn’t say I was blown away. But It was definitely something piping tea.”

On why she hasn’t talked to Tanya since Stripper Gate

“I haven’t seen Tanya since South Carolina. I texted back and forth a little bit shortly after. I extended an invite to her for my Black-owned businesses pop-up shop that you guys will see coming up. Our friendship was in a strained place anyways for this season. We were coming off that whole Cookie Lady drama. I personally felt the way she handled that in regards to myself and Eva wasn’t as accurate as what really happened. I was really upset with Kenya for inviting that lady to lunch, and Eva was very supportive of Tanya. When it all played out, it seemed like she didn’t find it necessary to acknowledge that publicly. That was hurtful. At the reunion, there was no real acknowledgement of it. We’re in a cordial, respectful place. I don’t really have an issue with her. But we’re not close or talk on a regular basis. I wish her and Paul well as always.”

On constant rumors she’ll be fired from RHOA

“I’ve been on the show for a decade, and every season there are rumors I’m not coming back to the show or I’m fired from the show. Without fail. Those same rumors circulate every single time. I find that hilarious because, to be honest with you, I’ve never ever been in jeopardy of my job on the show. I’ve always gotten my letter back right on time and the network has never told me at any point, ‘We don’t feel like you’re not bringing it. We don’t feel like you have a storyline.’ I’ve never been demoted like some of the other ladies have for a lack of a storyline. I come to work. I show up and give you me. Whether you personally find me entertaining or not, that’s on you. Everyone has the woman they can relate to on the show and they find entertaining. I don’t know why those rumors always circulate. It’s kind of a running joke at this point. I’m like, ‘Well, I hope they keep going.’ Because if they say I’m coming back, then maybe that’ll be the year that I don’t get to come back.”

The Real Housewives of Atlanta airs Sundays at 9 p.m. on Bravo.