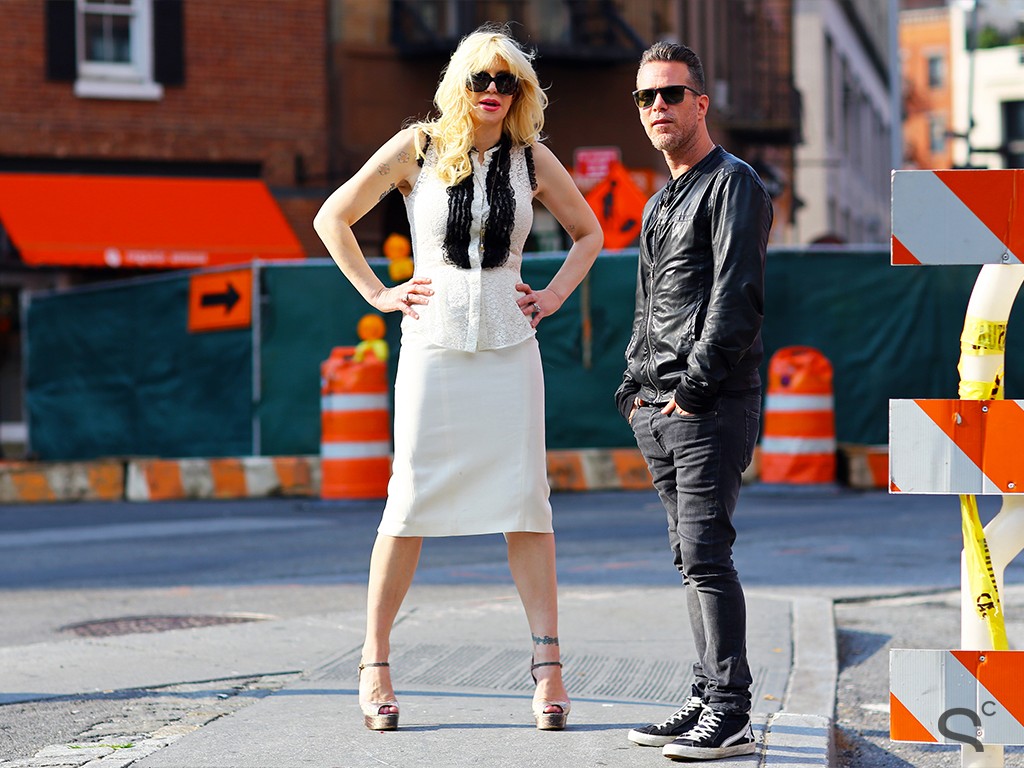 Legendary rocker Courtney Love and modeling mogul Scott Lipps may at first seem like a somewhat unlikely duo—but they share a sense of humor, obsessive devotion to Rick Owens, and lately, even a job: Lipps is the drummer for Love’s band Hole! While we shot Love and Lipps for this year’s 50 Most Stylish New Yorkers near Love’s West Village townhouse, we couldn’t resist asking them some questions. They dished on everything from Saint Laurent to Lipps’ upcoming book POPLIPPS: Plus One
to popular blogger Man Repeller.

StyleCaster: Tell me a little bit about your personal style.
Courtney Love: Well, I flip back and forth because I have my rock style and then I have my lady style. Like tonight, we’re going to a Cinema Society party, and actually Scott’s going to come with me. I’m bringing a lawyer I met on the plane, see, I’m working fast baby. It’s his own firm and he has 55 lawyers underneath him. We like that.

I actually have two walk in-closets: lady clothes and rock clothes. Sometimes I combine the two. What I love about the Saint Laurent collection, what little I have of it—it’s crazy to walk into Maxfield and see your face that big and not have it—finally I wrote to Hedi and I said, “Dude, you gotta hook me up!” Especially with Fall 2013 and the grunge collection.

Yeah, that’s so you!
Well, no. It’s not me because I never wore Doc Martens, so that’s a big difference. But the cardigans, there are pieces though. Those floral dresses that Marc was ripping off, and some in the rock collection, they came from Urban Outfitters and or vintage—rayon. That’s why I like the collection a lot because you can do a rock chick look but also have it be ladylike.

I also find right now I’m a little heavier right now in my rock weight, not my lady weight. So my lady weight is about 10 to 15 pounds less and I look totally great on stage on my lady weight, especially with this blouse that Scott organized for me. It’s a whole story. It’s like a  J.R.R. Tolkien story of getting a ring for a hobbit. This blouse, three years chasing this fucking blouse!

For lady stuff you can’t be too thin. Right now I’m an 8, which I’m not too happy about. Usually my clothes are 4s or 6s, but I’ve had to buy some 8s just to supplement until I get back to salad.

It’s hard to get back to salad!
Well I’m doing it because you either live or die in this town, and you live or die because you’re fat or thin, and you can’t be fat. I’ve been back and forth from L.A. a lot and you cannot be fat in L.A.—forget it. Here, they’ll forgive you, but not in L.A.

Can you tell me your thoughts on New York style?
I’ve been bi-coastal since 2000. I bought a loft on Crosby [Street] and I’ve lived here exclusively since ’09. People are constantly coming up to me, and they’re like, “Are you here now?” because I’m so affiliated with L.A. New York style is like, sometimes I’ll just wear Free People. I think Free People is such a cool brand, they rebranded and I freakin’ love it. I would love to do a capsule collection with them—I think they’re great. They’re boho. I love their whole campaign. Even if I am getting paparazzi’d, I don’t care—f–k you, it’s Free People, it’s cool.

I’ve got my Rick Owens jacket on with my Free People and Miu Miu shoes, so eat me. You can wear whatever you want in New York, I suppose you can wear Forever 21 if you were inclined. In L.A., it’s people just don’t get it right really. I find I’m a lot more aware of what I wear here. If I go to the Hamptons I’m a lot more aware of what the Hamptons is. I have almost like different personalities. Some of the rock stuff fits. I have two huge suitcases that I brought back last night when I came in, and one of them was lady clothes and one of them was rock clothes because we were just on tour.

You guys are on tour?
We’re finishing it up. We have like 5-6 more shows. And a secret show in New York.

Tell us about it!
It’s for Scott’s book launch, because he has a book coming out called POPLIPPS. And it has an excellent picture of me I might add, it’s of me laying on the ground. Scott and I were out one night and Scott takes a lot of pictures and I said, “Let’s just do it in the middle of the street!” So I lay down in the middle of the street and it was a really good shot. I didn’t think anything was going to come of it.

Scott, can you tell us a bit about your style?
Scott Lipps: When in doubt wear black. I wear Rick Owens whenever I can, and once every four years I can afford to buy a new Rick Owens jacket. I wear Rag and Bone and brands like that the rest of the time. These shoes I’m obsessed with are called Golden Goose they’re from Italy and they’re my favorite sneakers. They’re like Converse but a little bit more chic.

Courtney: I want a pair of Keds! I have to add this about Rick Owens; I was his first client ever. I was on Hollywood and Vine and I saw this man in the window and he was working and he had big muscles. I went into his office, it was 1996 and every single color was named after death in a different language. And he was doing something to cotton with acid to make the cotton more Rick Owens-y which we now take for granted. But what I bought from him wasn’t a T-shirt. I had $120 and I was going to buy magazines across the street and he sold me for a $120, I still have it, it’s a burlap and felt skirt with a giant buckle.

Courtney: I’ve purchased the whole collection before. Like the collection that was all blacks and whites, I bought every dress in it. On my third floor, where my band crashes, there’s a huge walk-in closet. I can’t even eBay anything because I won’t get what it’s worth and it will break my heart.

I call it my eBay closet, even though eBaying is useless. I tried it once; it’s useless. I have some of his early ’90s pieces and one time I was in Charles de Gaulle airport with my band and I saw a very snotty French girl in what was clearly a Rick Owens leather jacket, and I ran after her. I chased her and I asked her, “Is that Rick Owens?” and she said, “I don’t know”.  And I thought, he’s made it. He’s got it on snotty French girls!

Scott: One day I’m going to break down and buy a Tom Ford suit.

Courtney: Oh yeah, Scott, you’ve got to. What are they? Six?

Scott: I’m waiting for the friends and family discount.

Courtney: I don’t get that. I know Tom slightly. He likes me and then he had a show here  and I wasn’t invited, it was only 100 people. I was like, I am such a loser. I was sitting with Lady Amanda Harlech and Daphne Guinness and they were going and I wasn’t invited and I’m like, Oh my God. So the next week I called André Leon Tally and he took me to lunch. It’s where André Leon Talley has lunch everyday, there are Warhols everywhere.

David LaChapelle has art there. Andre Leon Talley has lunch every single day at this restaurant. I was at lunch with him three times—four times and he’s mentoring you and I haven’t gotten there yet. I’m waiting for that.

You guys have done Leandra from Man Repeller, right? I found that bitch, man! I was an early adopter to that site. I love her, she’s hilarious. I haven’t been to the site in a while, it’s more fashion-y—not so much man repelling anymore.