I was born transgender, but back in 1993 there was no way of explaining that. Although I was announced a “boy” at birth, my mother knew something was different about me from the moment I was born. When I was two, I asked her for a Cinderella dress and my journey to finding my own style started there. My mother raised me with unconditional love and support, and never denied me of my natural desire for all things pink and “girly.” Now, I’m a 24-year-old transgender woman living happily in Los Angeles, and I realize that being unapologetically authentic and staying true to myself has been my saving grace.

When I moved from Los Angeles to a small town in New Jersey at age seven, it became very clear to me that although I played dress-up, wore my mother’s heels and makeup, played with Barbies, and had mostly female friends, I wasn’t actually a girl. Prior to middle school, I was happy to wear whatever my mom dressed me in to school and then come home and quickly change into my favorite red floral dress. But in middle school, I began to want to wear what my girlfriends were wearing and became extremely jealous of them.

I knew I wasn’t gay, but I struggled to find the words to describe how I felt. Then, during career day in eighth grade, a presenter handed out magazines to showcase her advertisements. Each student had a different publication, and mine was an issue of People featuring a story on a teenage female-to-male transgender boy. I saw the word “transgender” and the phrase “trapped in the wrong body,” and it hit me: I was transgender. I was trapped in the wrong body.

It hit me: I was transgender. I was trapped in the wrong body.

After a few weeks of reading the article over and over, I brought it to my mother and asked her if transgender was a real thing (clearly she knew where the conversation was heading). When she said yes, I felt so excited, and a few days later I told her I wanted to be a girl. Without hesitation, she supported me. I went through my freshman and sophomore years of high school as physically male, but knowing I was a female started to weigh heavily on my soul. It wasn’t until my junior year that it became apparent I was miserable presenting as male. After the Halloween dance that year my mother—who happens to be a top cosmetologist and stylist—offered to let me wear her clothes.

Between November 2009 and May 2010 I slowly began wearing my mother’s tops, jeans, nail polish, and eventually she helped me buy bras and I started to wear mascara. By that time, the rumors of me coming out as gay had vanished and my classmates realized that I was changing genders in front of their eyes. I was struggling to find a junior prom dress I felt suited my new appearance, so my best friend let me wear her simple black dress, and she found another. At the end of May, I was crowned Prom Queen, a dream come true for me. I felt happy and beautiful, and that was new for me.

Being crowned Prom Queen was a dream come true for me. 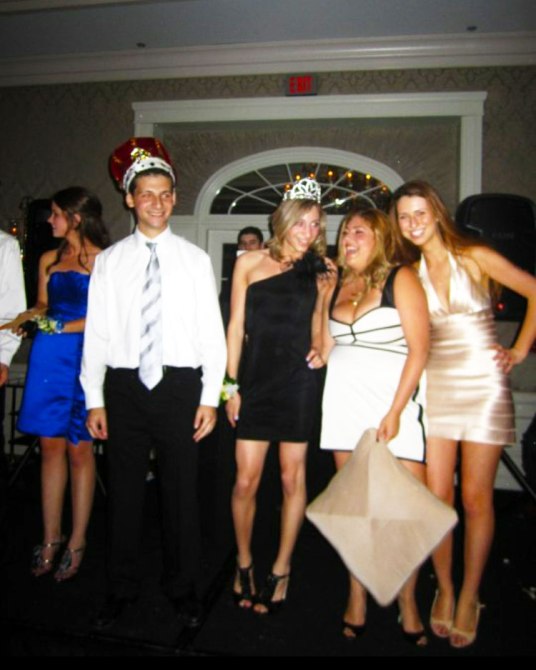 The summer before my senior year—my first as a high school girl—was bittersweet. I loved being able to wear shorts and skirts, but I felt uncomfortable trying to hide my “bulge.” I didn’t want to “tuck” (the practice of pushing a penis between and behind the legs so it’s less visible), so I was constantly worried about keeping everything as female-looking as possible in clothes. By the end of senior year, I’d accumulated hand-me-downs from my mom and friends, and had a decent amount of new girl clothes for college as well, but I still hadn’t found my own style, and wouldn’t for quite some time. When I went to college, I decided to keep my past a secret and go stealth into my new life; after all, college is a place for fresh starts, right? I successfully went through my entire freshman year at Hofstra without anyone seeing or feeling my male genitalia (including a guy I dated for three months).

When I left for college, I decided to keep my past a secret and go stealth into my new life.

Then, on June 4th, 2012, the day after my 19th birthday, I finally had sexual reassignment surgery in Pennsylvania. After praying every night starting in the fifth grade to wake up a physical girl, I did. Although the healing process from my surgery was long and excruciating, I was determined to be perceived as a biological woman, so I was extremely disciplined in all my post-surgery steps. During my pre- and post-operation procedures, what kept me going was the fact that I’d be able to get up in the morning and put on whatever I wanted, and just be. I would repeat to myself, I’m going to be in a bikini; I’m going to be in a bikini.

After surgery and a summer of new bathing suits, I went back to college and started to become comfortable wearing items like short skirts and denim cut-offs, which allowed me to start to experiment and play around with my personal style. I left behind the baggy tees paired with leggings and my fall looks started to consist of outfits including lace tops and tight black jeans. After studying abroad in Amsterdam during my junior year, I returned to college senior year ready to show off my newfound self-love. My confidence had hit a high and I began to wear risque, bold outfits no one else would think of wearing. I wore my Dutch ex-boyfriend’s XL tank top with nothing but a pair of platform snakeskin sneakers. I wore my mom’s lace cardigan from the 90s with no bra underneath, paired with a draping, red, high-slit skirt. 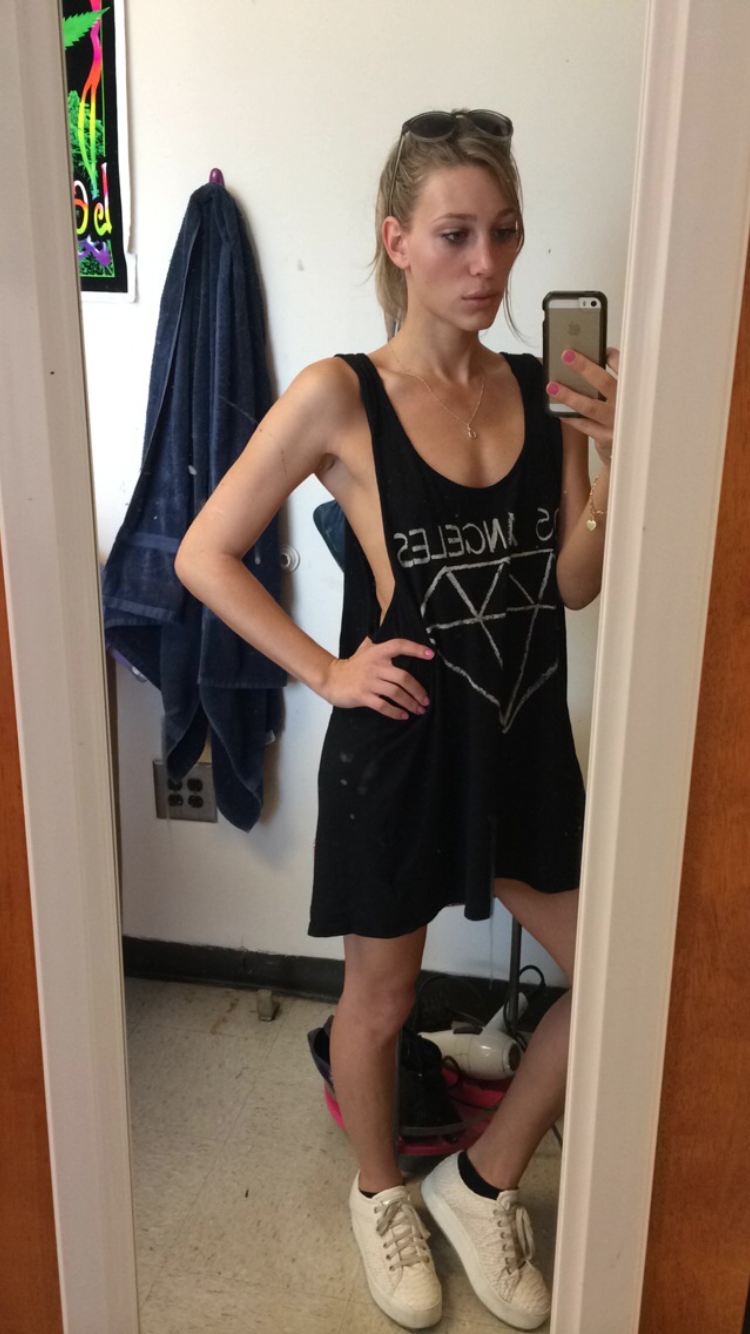 MORE: Essay: ‘My University Ignored My Rape Because I’m Trans’

It became apparent at school that I was taking risks and, as usual, not apologizing for expressing myself freely. On my last day of college classes, I wore nothing more than a bikini and a pair of wedges. For graduation, I stripped off my robe, threw it over my shoulder, and strutted across the stage while blowing a kiss at our President (I never did like him). I left Hofstra an icon, but little did anyone know I was transgender. In fact, no one knew until a year later.

Five long years after graduating high school; five long years of keeping a major part of myself hidden from my college friends, exes, and ex-lovers—I launched my website. My first blog post, titled, “Allow Me to Reintroduce Myself,” was published in June 2016, right after Gay Pride and almost a year to the day since same-sex marriage was legalized nationwide. In the post, I came out to the world as transgender and posted the link as my Facebook status. Just like that, I was “out.” By the next evening, I was on Yahoo’s Beauty Section and my writing has continued to guide the transgender community and the cisgendered people who want to learn more about us.

I was taking risks and, as usual, not apologizing for expressing myself freely. 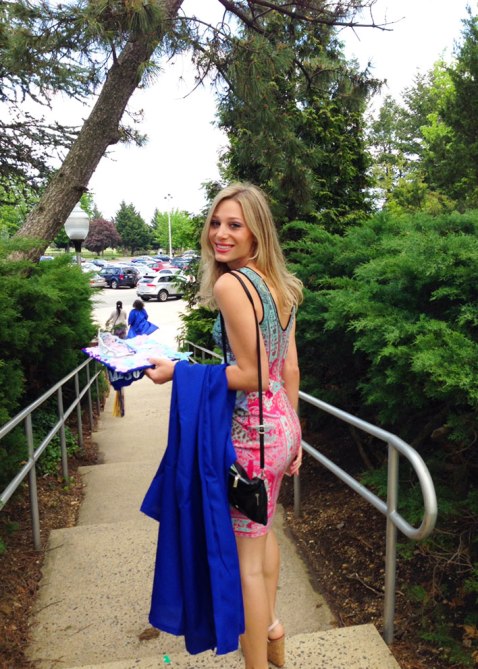 MORE: What It’s Like to Navigate American Beauty Standards as an Immigrant

Today, I’d say my style reflects a “Barbie gone shopping” look, but I’ll never forget that I wasn’t always able to throw on a pink maxi dress and head out of the house. Words can’t describe how painful it was to get up every morning and dress a body I didn’t identify with. It wasn’t the best way to start the day and it took a toll on me. Being able to wear thongs or a bathing suit is something most girls take for granted, but I couldn’t be more appreciative to don them.

Words can’t describe how painful it was to get up every morning and dress a body I didn’t identify with.

If you’re still reading this, which I hope you are, you might be wondering why I’m explaining an abridged version of my life’s story. Well, I want to formally introduce myself as a new contributor to STYLECASTER. I hope my writing will help inspire a broader sense of transgender acceptance, as well as become a go-to resource for transgender women (or any woman, for that matter) on fashion, beauty, and lifestyle tips.

Our culture lacks respect for what transgender people go through, and we seldom think specifically of transgender women as beautiful. I’m here to break those social stigmas around trans-women and prove that we are not only beautiful, but strong, courageous, sexy, and stylish.