As a transgender adult woman, I understand the difficulties of finding Halloween costume ideas for transgender women. This is an experience that should be filled with joy and excitement—not dread and worry. In fact, Halloween has long been my favorite holiday. When I was younger, it was the one night I looked forward to most—because I could dress as a Disney princess or pink Power Ranger without feeling as judged as I did during my day-to-day dressing up.

As I grew older, though, I became more aware of how others perceived my costume choices. I started dressing less like my girlfriends, trading the costumes I’d once cherished for more androgynous or scary ones.

What I wanted most was to do what my girlfriends were doing—without having to deal with judgment from family, friends or neighborhood parents. As I once wrote on my personal blog, “Learning of society’s disapproval of my genuine attraction to feminine things—things that made me happy—destroyed a little part of my heart for a good portion of my life.”

If you haven’t yet transitioned—or even come “out” as transgender—Halloween is a great night to test the waters. A female-targeted costume can offer you the chance to express yourself freely, even if only for the night. Once you have a taste of that world, it might be hard to go back to presenting as the gender you don’t identify with. But perhaps it’ll give you the confidence to be your true self with those around you.

If you’re worried about being judged, opt for a funny or scary costume, rather than a sexy one. Dressing as a zombie bride (and having a female friend dress as your groom) can be a subtle way to gender-swap a classic costume. (Swapping Sandy and Danny from Grease or Jessica and Roger Rabbit can be an easier way in, too.)

You can apply the same logic to solo costumes—like Disney princesses, Snooki, Kim Kardashian and other recognizable public figures—too.

“Learning of society’s disapproval of my genuine attraction to feminine things—things that made me happy—destroyed a little part of my heart for a good portion of my life.”

If you’re in transition but haven’t yet had surgery, Halloween can be way more tricky than treaty. Masking the parts of your body you aren’t comfortable with—while trying to be somewhat sexy (or just comfortable)—can be pretty difficult.

In elementary school, I remember everyone had to wear sweatpants under their costume to stay warm when the temperature dropped at night—and I hated it. While as an adult, I still wouldn’t totally recommend it, choosing a costume that inherently involves leggings or pants to cover a bulge could be key in keeping you comfortable at a time when you might not feel your best.

During my senior year of high school, I experienced my first Halloween as a transitioning, pre-operative transgender woman. I was throwing the Halloween dance with three friends, and we decided to go as two Ke$has and two Lady Gagas. (I was one of the Ke$has.)

I wore super tight ripped shorts and a bandeau top—and I’d never felt hotter. During my freshman year of college, my last Halloween before surgery, I dressed as a bunny—complete with a furry white top and hot pink skirt. 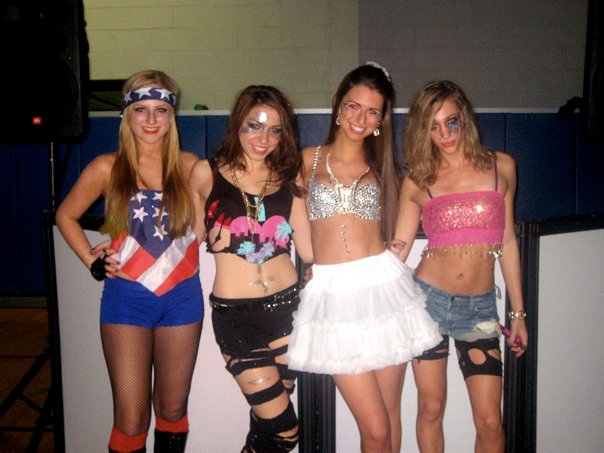 After surgery, I went wild with my costumes. And since college “Halloweekends” were filled with party after party, I had plenty of opportunities to make up for lost time.

That was probably my most iconic costume to date—besides Regina George, of course.

After college, I went as “pop and punk” with my friend Michaela. And the next year, my friend Lucie and I dressed as Blair Waldorf and Serena van der Woodsen from Gossip Girl. (Blake lively liked the photo of us on Instagram, and it got likes and comments from around the world for days afterward.)

Last year, I dressed as a ’90s socialite. And this year, my costume is still to be determined. It’s totally normal to plan a costume and change your mind at the last minute—that’s happened to me most years.

“Halloween is the one day a year when you can dress up exactly as you want and no one can say anything about it.”

The last time I was perceived as a boy on Halloween was extremely hard for me. It was my junior year of high school. Twelve of my girlfriends were Eve, and I had to be their Adam. I watched them, carefree in their leafy bras and skirts, dancing the night away with boys I wished I could’ve danced with. That night—and the feelings I felt during it—were the ultimate catalyst for my transition.

To paraphrase Mean Girls: “Halloween is the one day a year when you can dress up exactly as you want and no one can say anything about it.” Nobody can judge you. I encourage you to continue your strength as a transgender woman and be courageous with your costume this year. This is your life, your costume and your night—so make it the best you possibly can.

And a quick note to parents: Please let your children express themselves freely and not worry about what others may think or say. Your first instinct might be to protect them from the harsh judgment of the world, but knowing that they can be themselves—and that you’ll support them no matter what—is much more foundational to their success and happiness.

Halloween is a huge night for most kids. And if your child is showing signs of being transgender (or has already identified as such), please let them dress as they please—at least on this one night, which has the potential to be so joyful for so many.

During my last Halloween in New York City (three years ago), I saw a little boy wearing a dress. As the boy skipped down the block without a care in the world, his father stood proudly behind him. And I felt so many things—happiness for the child, sadness for my younger self and an overwhelming feeling of hope for our collective future.