The anticipation is killing us. Crazy Rich Asians premiered in the U.S. today, and we’re still in the office. Shouldn’t this be, like, a national holiday? Whatevs, we’ll see it tonight.

Ever since news of the film broke, all eyes have been on 36-year-old actress Constance Wu, who plays main character Rachel Chu. In the film, Rachel agrees to attend a wedding in Singapore with her longtime bae, Nick. Not long after touching down in Asia, Rachel discovers that her boyfriend’s family isn’t just rich—they’re, well, crazy rich. As it would, chaos ensues.

While we’re practically dying of anticipation over here, Wu has given us a reason to tear our eyes away from the clock. And, per usual, said reason comes in the form of an incredible outfit. 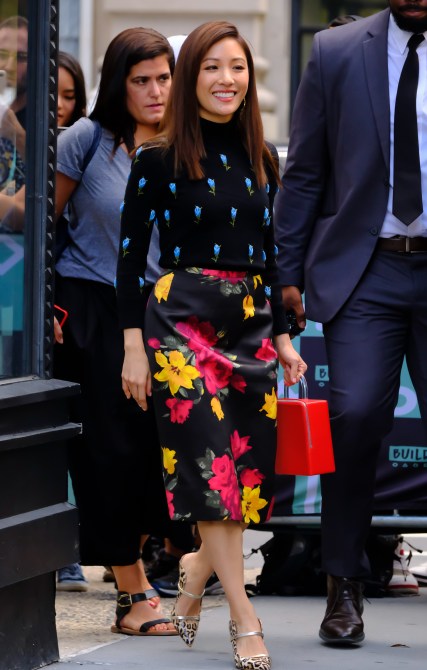 Wu stepped out in New York City on August 14 wearing head-to-toe florals. (Groundbreaking, we know.) But the crazy part? They were totally mismatched. Her fitted black pullover ($1,275 at Michael Kors) featured tiny blue roses, and her skirt featured big, bright red and yellow ones. We never thought we’d say this, but we’re very into mismatched florals now.

(Pro tip: Take a page out of Wu’s book and pair a bigger, bolder print with a smaller, more intricate one. Nine times out of ten, it’ll keep your florals from clashing and make them look like mix-and-match magic, instead.)