People reported on Sunday, September 12, that Conor, a professional mixed martial artist, and MGK almost got into a brawl at the MTV Video Music Awards when Conor appeared to yell at MGK as he and his girlfriend, Megan Fox, walked by on the red carpet. Photos and videos from the event show the UFC champion try to punch and lunge at MGK before he was restrained by security guards. MGK, for his part, could also be seen engaging with Conor as he’s pulled back by Megan.

A source told People that Conor, who presented at the VMAs, asked to take a photo with MGK but his request was denied by the rapper’s team. “Conor went in on it a little bit,” the insider said. The source also claimed that Conor dropped his cane when he came for MGK before retrieving it and swinging it toward the rapper. A rep for Conor, however, denied that he asked MGK for a photo. “Conor and Dee are in their seats enjoying the show. Conor appreciates all his fans,” the rep said, noting that MGK also “attended Conor’s last fight.”

In an interview with Entertainment Tonight after the VMAs, Conor denied that he tried to start a fight with MGK. “Absolutely nothing. I don’t know. He showed up, and I don’t know. I don’t know the guy,” he said when asked what happened between him and MGK. “Nothing happened with me, I only fight real fighters, people that actually fight, you know what I mean. I certainly don’t fight little vanilla boy rappers. I don’t even know the guy. I don’t know anything about him, except that he’s with Megan Fox.” In an interview with Variety, Kelly declined to comment on the “scuffle” between him and Conor and covered the interviewer’s mic. “We’re not allowed to say,” Megan said. 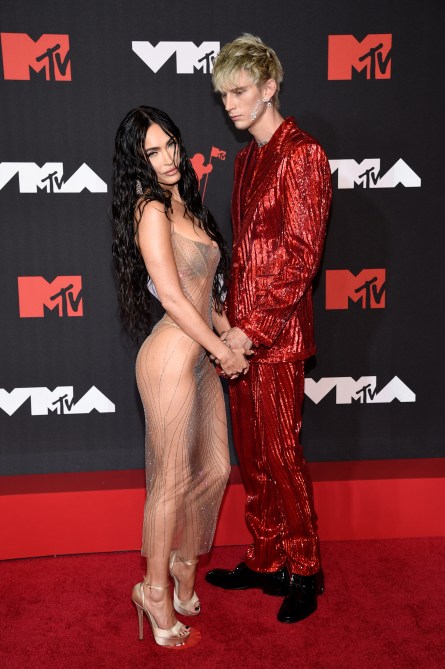 TMZ also reported that the fight started between Conor and MGK when the rapper refused to take a photo with the fighter. The site also reported that Conor stumbled, spilled his drink and threw the rest of it on MGK. A source told Variety that McGregor tried to approach MGK, who was in line for red carpet photos. However, before he got the rapper, the source said he was stopped and pushed by MGK’s security.

As Conor continued toward MGK, the source reported that MGK “sort of snarled” at Conor. Then, the fighter, who was walking with a cane due to a recent injury in a fight, “fell back and dropped his cane.” Variety also reported that Conor then spilled some of his drink and yelled something along the lines of “that fucking punk punched me.” The source claimed that Conor’s team was “begging him” to let it go as he came at MGK.