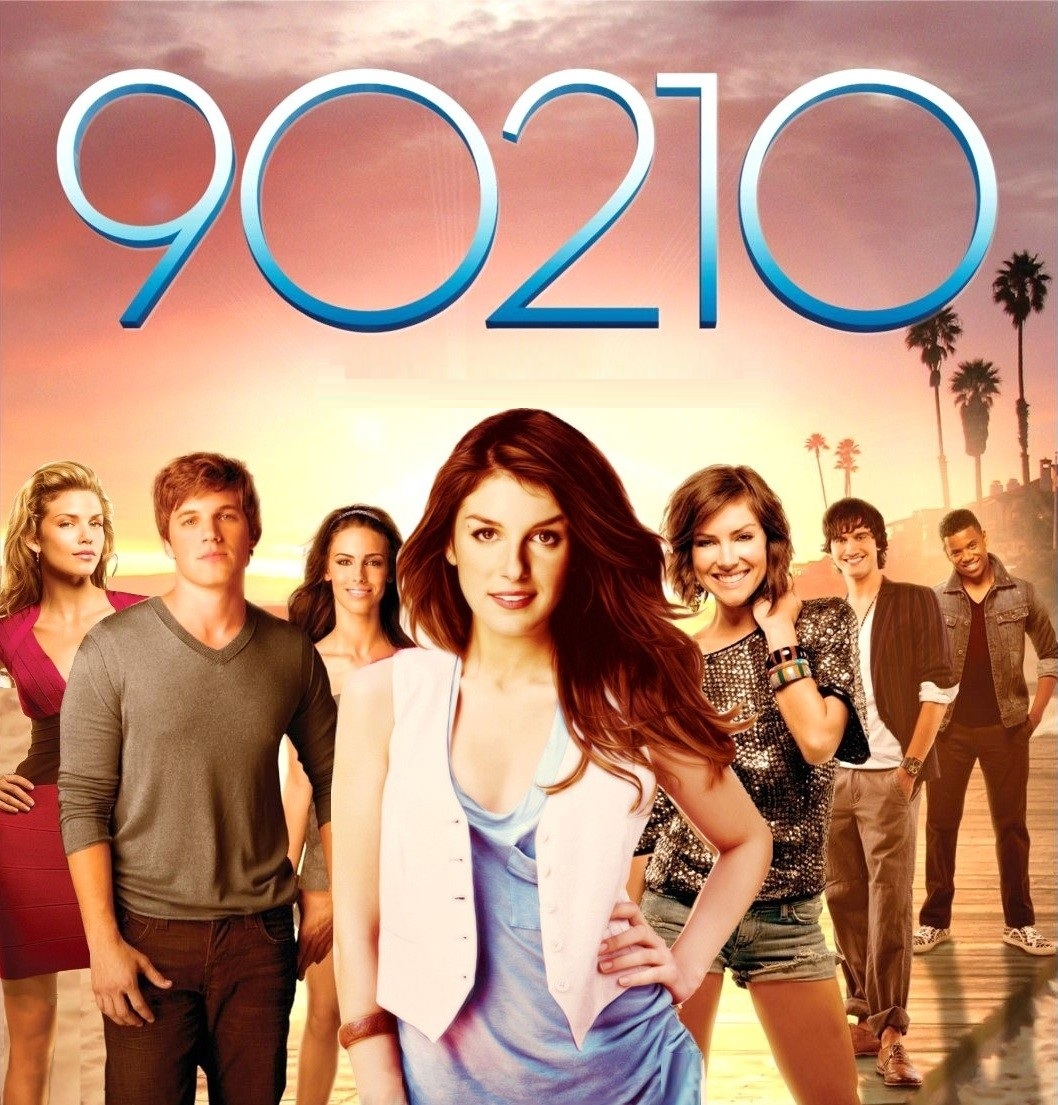 We don’t know about you, but as much as we’d like to say we’re surprised that the CW decided to ax “90210”—the reboot of the original ’90s hit—after five seasons, we’re really not. At all. According to the CW network’s president Mark Pedowitz, the series finale will air in May.

However, while we’re aware “90210” isn’t the work of geniuses, we’re not ashamed to admit it had its moments: It was soapy and entertaining, pleasantly mindless, and it got marginally better after season 1—a rarity in these types of shows. But, like so many frothy confections before it, there are only so many love triangle/hit-and-run/prostitution/addiction storylines to go around, so the show had to choice but to get “creative” with its plot points, presumably leading to its demise. Surrogacy, adventures in party planning, cancer genes, and an errant food truck storyline all featured prominently in season 5, so yeah, not a shock.

Still, after the countless times we’ve sworn this episode will be our last (empty threats, obviously), and after all the eye-rolling drama, we’re a little sad to see the show go. So, as a final farewell, we’ve decided to completely geek out and assemble a retrospective of some of the series’ most ridiculous plot points across all 5 seasons (yes, we watched ’em all, no judgement). If this doesn’t make you want to run to iTunes and start all over, we don’t know what will.

Season 1: Wholesome family arrives in Beverly Hills from Kansas
-Good girl Annie and rich ringleader Naomi find out they’re half sisters. How convenient!
-The “parents are sexual beings, too!” storyline, in which Naomi and Annie’s mothers find themselves in a love triangle over Annie’s dad Harry, West Bev’s principal. Bo-ring!
-The fact that a modern-day character and car-accident victim (played by Aimee Teegarden from “Friday Night Lights” ) is named Rhonda. That’s just odd.
-The infamously embarrassing attempt to be zeitgesity by having two characters battle for a role in a musical by singing a song from “Spring Awakening.” If you want to cringe, Google it.
-Ethan. Enough said.
-Navid pays for pregnant junkie Adrianna’s rehab, and proposes to her though the baby isn’t his. Naturally, Adrianna goes into labor at the prom, and gives baby up.
-Kelly and Brenda are back, but with lame-o storylines. The frenemies realize they’ve both slept with Ryan, the new “hot” teacher at West Bev, then Brenda adopts a baby from China.
-The “very special episode” in which Silver finds out she has bipolar disorder.
-Naomi’s evil older Jen sleeps with Liam, Naomi’s brooding boyfriend, but Naomi thinks Annie did it.
-So Annie gets drunk and kills a stranger in a hit and run. Cliffhanger!

Season 2: Annie becomes an outcast, Ivy and Teddy arrive, Mr. Cannon is a sleaze
-Annie, guilty about her hit and run, starts dating weirdo outcast Jasper, who sells drugs to Adrianna, blackmails Annie, sets Liam’s boat on fire, and tries to commit suicide by jumping off the Hollywood Sign.
-Dixon starts dating an older woman named Sasha, who think he’s a hotshot DJ, and not the nerve-grating high school student he actually is. She later lies and claims she’s pregnant with his baby.
-A brief lesbian scenario arrives with Gia (Rumer Willis), who falls in love with Adrianna before cheating on her with an ex-girlfriend.
-Laurel—new girl Ivy’s “cool” music exec mom—offers aspiring singer and actress Adrianna a recording contract, which she accepts.
-Playboy Teddy Montgomery’s rich and famous father (Ryan O’Neal) offers Silver boatloads of money to dump Teddy, which she refuses to do.
-Liam enlists Dixon, Teddy, and Ivy to get revenge on Jen for being evil, who loses her boyfriend (the same “hot” teacher Kelly and Brenda slept with in season 1) and leaves town.
-Naomi is forced to come clean after lying about being sexually harassed by British teacher, Mr. Cannon. Then he actually rapes her because “nobody will believe her now.”
-Liam steals valuable coins from his stepfather in hopes of starting a life with his biological father.
-Dixon and his now-girlfriend Ivy flee to Australia after Dixon witnesses his parents fighting.

Season 3: Naomi gets scammed by a spiritual leader, Adrianna turns psycho, Teddy comes out
-Annie and Dixon’s parents get divorced; their mom starts up with the “hot ” teacher although he now has a baby with Naomi’s evil sister, Jen.
-Teddy and Silver are together, but Teddy realizes he might be gay after having drunk sex with another guy, Ian.
-Adrianna’s now a singer, touring with a pop star Javier. The two become a couple until she dumps him for Navid.
-Javier dies in a car crash and Ade steals his song book and becomes a star. She’s then blackmailed by Javier’s uncle who becomes her sleazy manager.
-Ivy’s childhood friend, Oscar, comes to town and tries to get revenge on Ivy’s mother (who he believes caused his mother’s death). To do it, he sleeps with her all summer, then takes her daughter Ivy’s virginity.
-Dixon finds out the aforementioned older woman, Sasha, is HIV positive, but he tests negative.
-Naomi and Silver are held hostage by rapist Mr. Cannon, who ties them up and tries to drain Naomi’s trust fund. Naturally, they get away and he goes to jail.
-Annie and Dixon’s cousin Emily arrives from Kansas, who goes all “Single White Female” on Annie, before the gang runs her out of town.
-During a spiritual retreat, Naomi becomes obsessed with Guru Sona, who scams Naomi out of millions of dollars. The school nerd, Max, helps her get her cash back and they start dating.
-Teddy gets blackmailed about his tryst with Ian; comes out of the closet to his friends.
-As a result of panic attacks after a surfing accident, Ivy  is prescribed medical marijuana, and meets Raj—a laid-back college student with terminal cancer, who helps her get back on her surfboard for good.
-Best storyline award: After Adrianna finds out that Silver is having a secret affair with Navid, she switches Silver’s bipolar medication with placebos, causing Silver to be committed to a mental hospital.
-Annie meets a fading actress, Marla Templeton, and inherits her entire estate when she dies.
-Ivy and Raj get married, although he doesn’t have long to live.

Season 4: The gang goes to college, Annie becomes an escort, parents are phased out for good
-The season kicks off with Liam drunkenly buying a beachside bar, which becomes the gang’s new hangout.
-Annie becomes an escort/prostitute to pay for Dixon’s rehab, and she falls in love with a client named Patrick, who (obviously) cheats on her.
-Goody two-shoes Navid finds out his uncle has been running a stolen car ring in the family’s former porn studio, and gets involved.
-The gang heads to CU, where Naomi meets sorority president Holly, who becomes her arch-enemy.
-Naomi buys a mansion, and gets involved with cowboy Austin, who used to date Holly.
-Liam gets in a motorcycle accident, and meets Vanessa, a crazy girl who tries to turn him into a movie star. He miraculously becomes one, starring in action blockbuster “Corporate Invaders.”
-Silver finds out that her boyfriend—a TA at CU—has an adopted daughter that could be the baby that Adrianna (whom Silver’s now forgiven for switching her meds) gave up in season 1.
-Dixon has a stroke because he’s so anxious that a record label wants to sign only him, but not his collaborator, Adrianna.
-Silver tests positive for the cancer gene that killed her mom, and decides she wants to have a baby before it’s too late.
-Naomi becomes an event planner, and plans a wedding that turns out to be Max’s. She decides she’s in love with him, and breaks up the nuptials.
-Raj dies and Ivy flees to Mexico for good with skater-artist Diego, who has been deported.
-Annie falls in love with a priest, who considers leaving the faith for her, then decides against it.
-Silver decides to have a baby with her gay best friend, and former boyfriend, Teddy.
-The season ends with Adrianna boarding a plane to Vegas to start her newfound country music career without Dixon, who gets in a car accident and might be dead.

Season 5: Hang in there, we’re almost done
-Dixon isn’t dead, but in a wheelchair; starts an affair with the girl whose father he killed in last season’s finale.
-Annie falls for a sarcastic wheelchair-ed guy she meets at Dixon’s rehab facility, who ends up dying after undergoing risky surgery to walk again.
-Naomi and Max get married, she breaks up his relationship with his business partner, they decided they’re too young, and they get divorced.
-Silver and Teddy have a falling out over the parental rights of the baby she hopes to have.
-Silver enlists a surrogate, who happens to be Teddy’s boyfriend’s sister, who also slept with Navid.
-Annie gets shot and has an episode-long dream in which she imagines she’d never left Kansas for Beverly Hills.
-A ridiculous food truck storyline ensues, in which Naomi tries to befriend her and Annie’s half bother who runs a taco truck, promptly leading to the series cancellation.