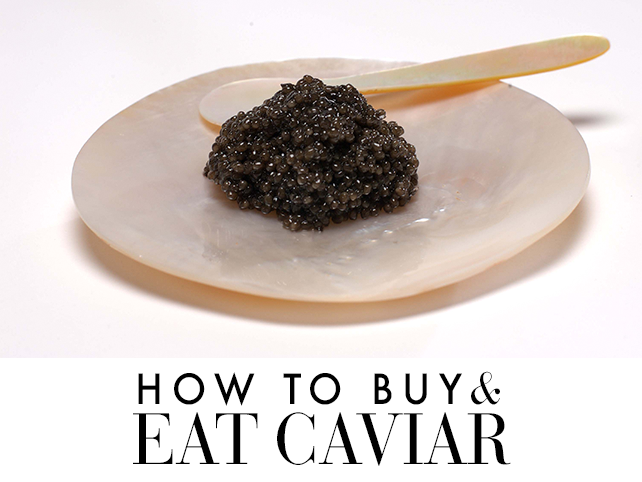 Few foods have captured the luxury market quite like caviar. Similarly, few foods inspire as much confusion. What kind is the best? Why are certain types of caviar so much more expensive than others? And what is the best way to eat it?
With that in mind, the complete guide on how to buy and eat caviar.
Where Caviar Comes From
The sturgeon fish, sometimes referred to as a “living fossil” is where caviar traditionally comes from. Three species of the sturgeon—the beluga, osetra, and sevruga—supply most of the world’s caviar. These species of sturgeon live in the Caspian Sea. Because of decades of overfishing, sturgeon has become increasingly scarce, and because of that other kinds of roe have become increasingly popular.
It’s important to note that caviar from other types of fish, such as salmon, is not considered “true” caviar. And because of that, brands selling other kinds of caviar must label it accordingly. For example, a tin containing salmon roe must read “salmon caviar” not just “caviar.” 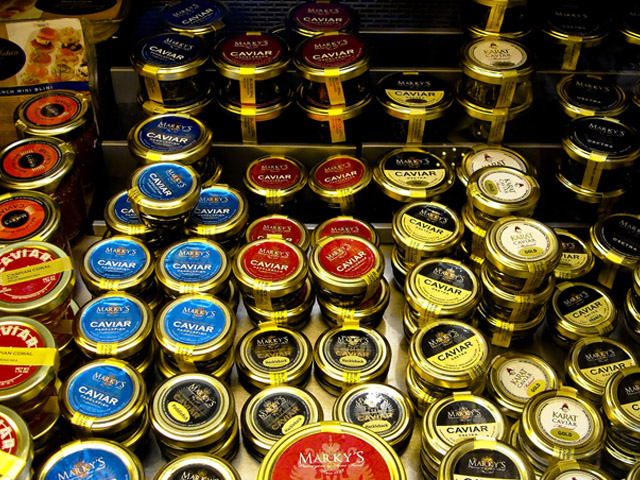 Kinds and Grades of Caviar
Caviar is generally graded by the size and texture of its beads (larger, firmer beads that pop in your mouth are more rare, and more expensive), and by flavor. As a general rule, more mildly flavored caviars tend to be more rare. However, the species of the fish, how it was raised, and how the caviar was treated and matured can vastly affect the final flavor. For each type of sturgeon, there are two grades of caviar.
Grade 1 caviar features firm, large, intact eggs, with fine color and flavor.
Grade 2 caviar is still delicious, but is less delicate, and not as perfectly formed.
Color criteria also comes into play. For beluga caviar, “000” indicates silver or light gray, “00” means medium gray and “0” is gray. Light colors are rarer than dark colors—but color doesn’t impact the taste.
Damaged roe doesn’t make the grade at all, but it can still be eaten.
The rarest, and most expensive kind of caviar is golden caviar. Also known as “royal caviar” it is thought to be the eggs that would produce albino osetra. This caviar, a pale off-yellow color, is found in only one in 1,000 osetra sturgeon. 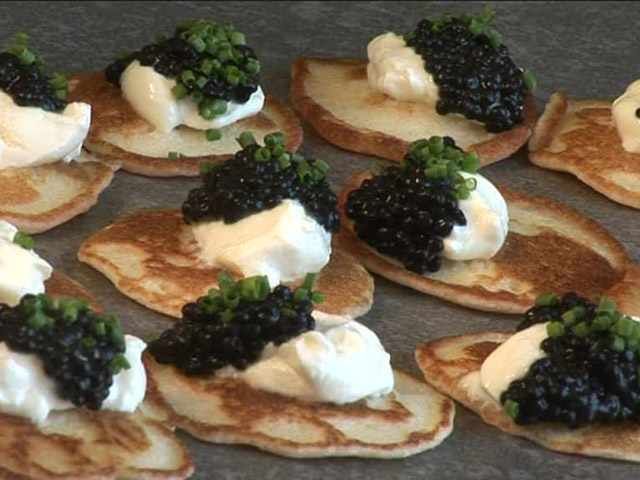 How To Eat Caviar
Whether pasteurized or fresh, caviar should always be chilled when served.
For purists, caviar is best eaten alone. Use a special spoon made of bone, crystal, or mother of pearl (metal spoons are believed to alter the taste) to eat the beads. Caviar should be served and consumed in amounts smaller than a tablespoon. It is traditional etiquette to eat caviar in small bites, and if you’re just learning to eat it, small bites will help you experience the flavor more completely without becoming overwhelmed by the flavor or texture.
Caviar is also often served with freshly buttered toast points, topped with a dollop of crème fraiche. Blini, thin buckwheat pancakes of Russian origin, are topped with a spoonful of caviar and a dot of sour cream and then loosely rolled into a tube. In some Eastern European countries, caviar is eaten with small steamed potatoes.
Experts recommend buying a 30 gram tin for two people. Whether fresh or pasteurized, caviar leftovers only keep for a day or two (but most recommend just finishing the jar on the spot). If you absolutely must store it, place the caviar in its original container, cover it tightly with plastic wrap, and then replace the lid. Place it in the coldest part of your refrigerator, and pack the caviar container in ice if the fridge doesn’t maintain a temperature below 32 degrees.
MORE:
The Top 10 Ice Cream Shops in America
How To Stay In Shape While Traveling