Since he became the first gay Bachelor in April 2021, fans have wondered who Colton Underwood‘s boyfriend is and who he’s dating now. Colton, who was the season 23 Bachelor, came out as gay in an interview on Good Morning America in 2021, two years after his season of The Bachelor aired on ABC.

“This year’s been a lot for a lot of people and it’s probably made a lot of people look at themselves in the year and figure out who they are,” he said at the time. “I’ve ran from myself for a long time, I’ve hated myself for a long time. I’m gay. I came to terms with that earlier this year, and the next step in all of this was sort of letting people know. … I’m the happiest and healthiest I’ve ever been in my life. That means the world to me.”

Colton made his Bachelor Nation debut on season 14 of The Bachelorette with Becca Kufrin, where he was eliminated in fourth place. He went on to star on season 5 of Bachelor in Paradise before he was named the season 23 Bachelor and became the franchise’s first virgin Bachelor.

During his interview with Good Morning America in April 2021, Colton revealed at the time that he’s never had an “emotional connection” with a man. “I’ve never allowed myself to,” he said. “It’s never been, sort of, in my cards to let myself get there and I want to more than anything.” He continued, “I’m looking for someone who can push me and challenge me in all the great ways.” So who is Colton Underwood’s boyfriend and who is he dating now? Read on for what we know about his current partner and past relationships.

News broke of Colton’s relationship with political strategist Jordan C. Brown in September 2021 after they were photographed kissing at Four Seasons in Maui, Hawaii. In photos published by TMZ, Colton and Jordan, who is nine years older than the former Bachelor, could be seen lying side by side on the beach chairs as they leaned in for a kiss. Jordan, the founder of political strategy agency One Blue Hill,, worked on John Kerry’s presidential campaign in 2004 and advised Barack Obama on both of his presidential campaigns in 2008 and 2012, which he also helped fundraise. Jordan also worked on Hillary Clinton’s presidential campaign in 2016. According to his Linkedin, Jordan graduated from Stanford University in 2004 with a bachelor’s of arts in political science and English. He lives in Los Angeles, like Colton. It’s unclear how Jordan and Colton met, but they’re both friends with Olympic skier Gus Kenworthy. The trio, along with other friends, took a trip together to Provincetown, Massachusetts, in June 2021.

In an interview with Us Weekly in December 2021, Colton confirmed that he and Jordan are “in love” while promoting his Netflix docuseries, Coming Out Colton. “I’m happy, I’m in love and I’m in a good position,” he said. “Everything as far as that goes has been pretty smooth. What was so cool too was, like, after the show was over, I didn’t know what was really next. I knew that I was still coming out and I still am. So there’s still things to work through right now. … The friends that I have, the support group that I have has been so helpful and impactful.”

Colton confirmed to The New York Times in December 2021 that his family met Jordan. “The easiest way for me to say it is that it was like me bringing a girl home,” Colton said. “Like, nobody batted an eye.” He also told People at the time that the relationship was unexpected. “I wasn’t really pursuing dating at first,” he said. “But since then I found somebody and I am very much in love.” 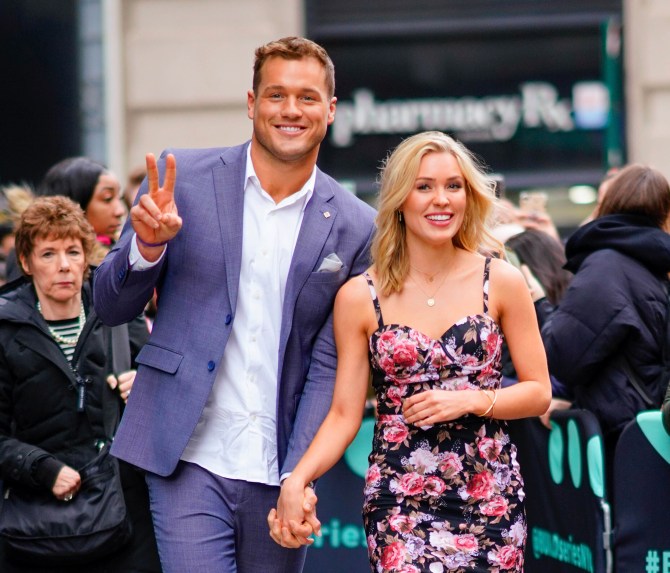 Cassie Randolph was the winner of The Bachelor season 23 in 2019. She quit in the final three; however, Colton convinced her to stay after he broke up with his runners-up, Tayshia Adams and Hannah Godwin. In May 2020, a year after his Bachelor finale, Colton announced on his Instagram that he and Cassie had broken up.

“It’s been a crazy few months to say the least, Cass and I have been doing a lot of self-reflecting,” Colton wrote at the time. “Sometimes people are just meant to be friends – and that’s okay. We both have grown immensely and been through so much together – so this isn’t the end of our story, it’s the start of a whole new chapter for us.”

Cassie also confirmed the breakup in her own statement. “First off, I want to say this is one of the hardest things I have had to share as neither one of us is quite ready to talk about it yet,” she wrote. “However, because our relationship is such a public one, our silence on the matter has been speaking for us. Colton and I have broken up, but have decided to remain a part of each others lives. With all that we have gone through, we have a special bond that will always be there. I love Colton very much and have an enormous amount of respect for him. We have both learned and grown so much these past couple years, and will always have each others back. Always.”

In September 2020, news broke that Cassie had filed a restraining order against Colton, citing Domestic Violence Protection. In court documents obtained by Us Weekly, Cassie accused her ex of “stalking and harassing her,” sending “unsettling text messages” and placing “a tracking device on her vehicle.” She also claimed that Colton took “obsessive” walks to her family’s home in Huntington Beach, California, and her apartment. After the filing, Colton was ordered to stay at least 100 yards away from Cassie, her house, her car and her workplace. He was also instructed not make “contact, either directly or indirectly, in any way” with her.

Three days before Cassie and Colton’s first court date in November 2020, Cassie dropped the restraining order. “Today Cassie asked the court to dismiss the temporary restraining order against me,” Colton said in a statement at the time. “The two of us were able to reach a private agreement to address any of Cassie’s concerns. I do not believe Cassie did anything wrong in filing for the restraining orders and also believe she acted in good faith. I appreciate everyone’s respect for privacy regarding this matter.”

During his Good Morning America interview in April 2021, Colton apologized to Cassie for his behavior after their breakup. “I would like to say sorry for how things ended. I messed up,” he said. “I made a lot of bad choices.” He went on to note that he was in love with Cassie, which “only made it harder and more confusing for me.” He continued, “If I’m being very honest, I loved everything about her. And it’s hard for me to articulate exactly what my emotions were going through that relationship with her, because I obviously had an internal fight going on.”

He continued, “I would just say I’m sorry from the bottom of my heart. I’m sorry for the pain and emotional stress I caused. I wish it wouldn’t have happened the way it did. I wish that I would have been courageous enough to fix myself before I broke anybody else.”

In a video on her YouTube channel in April 2021, Cassie addressed Colton’s coming out interview and told her followers that she wants to move “forward” from her past relationship. “Before I get into anything, I just want to say thank you so much for all the kind comments and messages from you guys,” she said. “I really appreciate it. Regarding the topic in the media that brought my name up this week, I just want to let you know that I’m not going to be further discussing it or commenting on it for now. There’s a lot of layers to it, and I just feel like the best thing for me at this time is to move forward and just focus on going forward. So if I do decide in the future to say anything or make a comment at all, you guys will be the first to know. But for now, I just want to say thank you for all the kind messages, comments and DMs.”