Talking about rape and all forms of sexual assault is important and powerful—something that has been brought to light this week by a powerful letter one woman, a victim of rape by a Stanford University swimmer, read aloud to her assailant at his sentencing. The letter quickly went viral, not just because of Buzzfeed’s wide readership, but because of its shocking content, along with the fact that a California jury gave the perpetrator a mere six months in prison—out of a potential 14 years. The honesty with which the 23-year-old woman—who’s choosing to remain anonymous—talks about her assault, and the range of emotions, experiences, and trauma that followed—makes a deep impact.

As women, it’s crucial to maintain the mind-set that the louder rape survivors’ voices are in the conversation, the sooner real change may start happening around this issue. Today, 19-year-old Abigail Gatewood shares her own story of being raped just 10 days after she turned 18, when she was a freshman at a university in upstate New York.

While every survivor’s story is unique, Gatewood, now a student at Bryn Mawr College in Pennsylvania, has something in common with the woman who wrote the Buzzfeed letter and, likely, a disproportionately large number of other victims, too: They didn’t get a fraction of the amount of support they should have from their communities—whether that be a university or a legal system that is in place, supposedly, to protect people.

StyleCaster: How did your rape happen?
Abigail Gatewood: I was at a fraternity party on campus with my friends when I was assaulted by a fraternity brother I did not know. I was extremely intoxicated when it happened, but I vividly remember coming to with my assailant on top of me, having sex with me. I don’t think a person can ever forget a moment like that, nor do I think someone could even imagine the horror of coming to and having someone violating you in such a way and not even being able to fight back.

The only way I can describe my experience was like I was floating, looking down on what was happening, but I was physically unable to move. People often ask me why I was where I was when it happened, or why I would be at a party alone. I’ve also been told it was stupid of me to drink and that I should have known better. Well, my response to that is, why?

I am a woman, and I have the right to go out with my friends and walk home alone and wear whatever I’d like to wear. My clothes didn’t cause my rape, and my drinking didn’t cause my rape—my rapist caused my rape. Rapists prey on weakness, the incapacitated, and those who can’t fight back. But to ask what I was wearing or why I was at a party is to perpetuate the idea that women cause their rapes.

No one asks to be raped. It’s the most underreported crime with the smallest number of false reports of all crimes. Yet it’s easier for society to blame the problem on a survivor than to recognize that rape is a social problem that will not change unless we begin to value women’s lives and bodies. 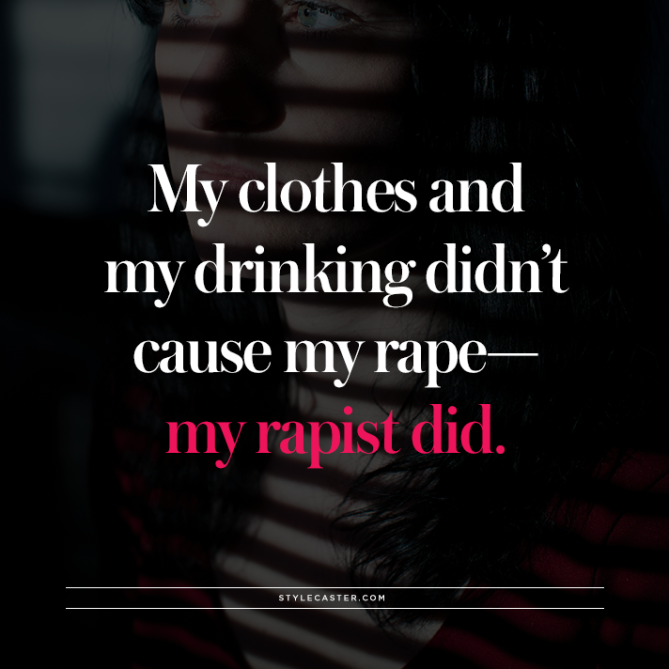 MORE: Part 1: ‘My Best Friend Chose My Rapist over Me’

What was your immediate reaction after being raped?
It takes time to process. In my case, I couldn’t pretend that it didn’t happen because it was obvious that something very wrong took place. I was really lucky to be carried home by a friend I trusted, and the next morning he helped me try to piece the events together. I knew that if I chose to report the rape, it would be in my best interest to have a rape kit done. I spent 10 hours in the hospital waiting to be seen. I’ll never forget being taken into a separate wing of the hospital, to a room way in the corner of a dark hallway.

I’ve found that societal responses to rape can be equally traumatic to being assaulted. People don’t want to hear that, but what they don’t realize is that during every step of the process—from being assaulted, to having a rape kit performed, to reporting the rape itself—you’re re-traumatized, and you relive every moment. There I was, an 18-year-old, alone in a sterile room at the end of a dark hallway having my naked body swabbed down by a stranger. To this day, the flash of a camera scares me because it’s a reminder of everything I went through just to “prove” I was assaulted. 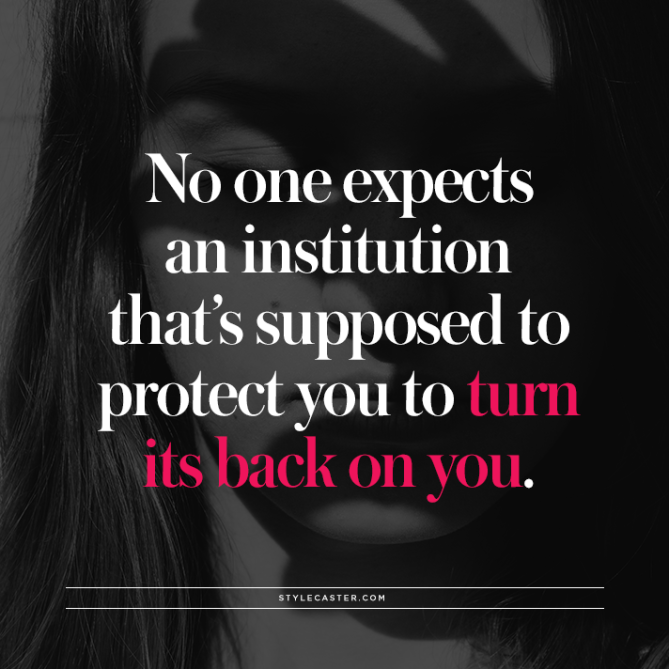 MORE: Part 2: The Life-Altering Effects of Being Raped in College

Did you consider reporting your rape?
I’ve always been a fighter. I knew that this gross injustice needed to be brought to light. I wasn’t willing to let this man get away with what he did, but in doing my part, I was put through the wringer. You expect people around you to support you—especially a university. But in my case, the university used their power to systematically deny me my rights not only as a student, but as a woman.

After the assault, I went to the Title IX coordinator and was horrified by the lack of assistance the school was willing to provide. A university administrator deterred me from reporting the rape to the police, so I chose to only file a report through the university. I was told that the process of reporting would be brutal, that it would change me, and that I would probably not be the same person afterward.

Ironically, it was the university’s actions that changed me. I went into the university hearing with proof that I was completely intoxicated, and was told I was not intoxicated enough for what happened to be rape. On top of that, after having a panic attack in my dorm hallway, I was assaulted by university public safety. I was told that if I didn’t go to my room, I would be arrested. I was thrown on the ground, I was sat on and held down for a long time, and then I was taken to the hospital. The security staffers said I was “mentally unstable.” 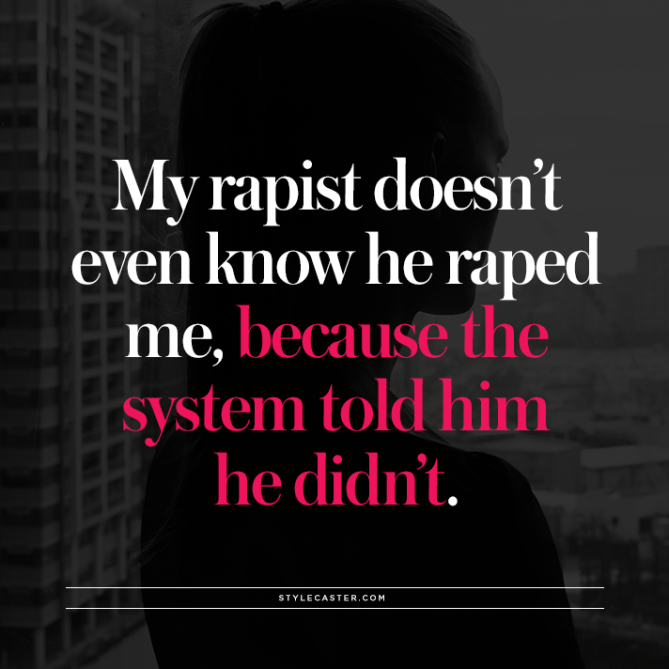 Not once did I physically fight back—I just screamed for them to get off me. I’ll never forget when a school administrator told me I have a substance abuse problem, and that I was in violation of the university’s drug and alcohol policy. I was threatened for being intoxicated when I was assaulted.

No one expects an institution that’s supposed to protect you to turn their back on you. Of course, I was aware of the statistics, but I never expected to be one. It’s amazing what money and power do to people. My assailant and I were both dollar signs, except he was worth so much more than I was—and coming to terms with that was devastating. My rapist doesn’t even know he raped me, because the system told him that he didn’t. My rapist was told that his behavior was OK, and that raping a woman is acceptable. How can you forgive a system that perpetuates such behavior?

MORE: Part 3: How It Feels to Stay Silent for 10 Years About Rape

How has being raped affected your life?
Being assaulted has impacted every single aspect of my daily life—and the fallout has been an emotional roller coaster. I went through a period of extreme depression and isolation, followed by a period of anger and resentment, filled in by short periods of happiness—only to again be consumed by the pain and sadness.

You don’t realize how much you’ve taken for granted until you’re terrified of being alone, until insomnia becomes your only friend, until the pain you go through every day becomes crippling, and until the silence in your mind becomes your worst nightmare. I never imagined that I would wake up in the middle of the night, screaming, my face bloody, because my mind was reliving the rape and I was digging my nails into my face.

In reality, living through rape and the trauma that follows isn’t the way it’s depicted on TV dramas or movies. For me, the months after my rape were dark. I left the university and moved to Chicago, where I spent the rest of the semester attempting to recover. I grasped onto every small piece of hope and happiness that I could. I watched the sun rise and set and learned to appreciate the smallest things. I learned to appreciate simply being alive.

Perspective heals; I learned to reframe my rape, to transform my pain and suffering into something that I could appreciate, something that is now a part of who I am—but does not define me. 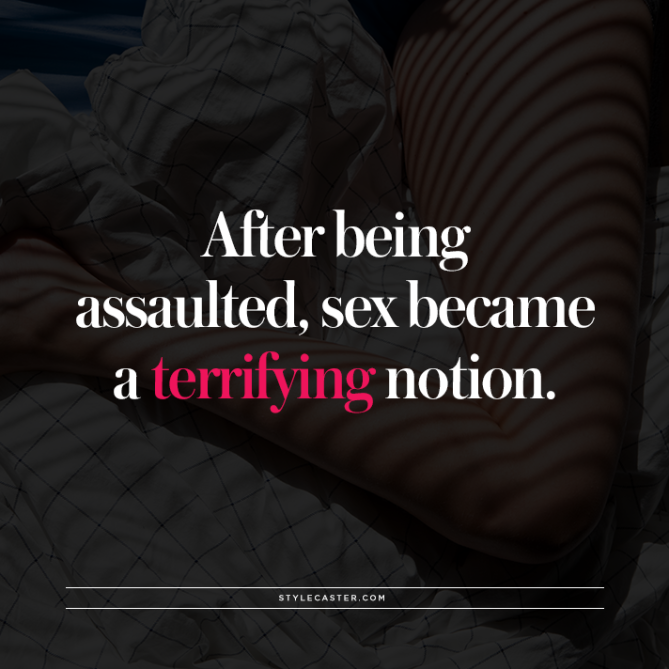 How has being raped affected your relationships?
After being assaulted, sex became a terrifying notion. I had to reframe what happened in order to approach any romantic relationship. I had to make conscious, daily efforts to remind myself that the rape would never define me. To this day, almost two years later, I struggle with the notion that what this man did has left a lasting mark on my ability to have romantic relationships.

How do you feel when you talk about your rape?
It has taken extensive therapy for me to be able to talk about it. I’ve come to terms with much of what happened, but the most troubling part was the injustice committed by the university. It’s hard to realize that in many ways the school’s actions have affected me as much as the assault.

I’m extremely open about my experience, and I welcome people to ask questions. However, I will say that telling a survivor you’re sorry is one of the worst things to say. People, whether friends or family, use the phrase instinctively, as a way to make themselves feel better, as if they’re offering support simply by letting you know that they are there for you.

The reality is that 99 percent of people who say they’re there for you are not the ones who are willing to come over at 3 a.m. when you’re having a panic attack—they’re the ones who treat your assault as a defining characteristic of who you are, who either pretend that it didn’t happen or pity you for letting it happen. 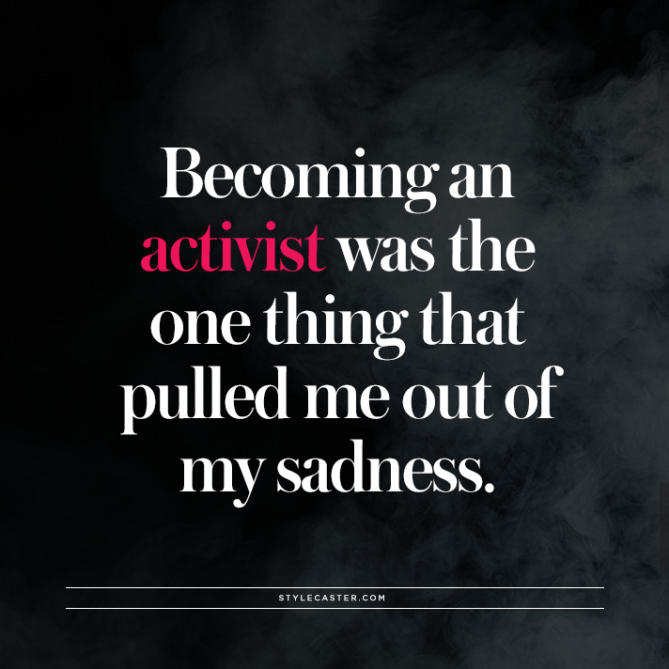 How has your experience of being an activist changed you?
Becoming involved in the activist community was the one thing that pulled me out of my sadness. Through the work, I was able to heal. I am no longer afraid of the power of my voice and my ability to use my voice as a tool for change. By working with legislators, NGOs, and other survivors, I’ve learned to speak out and that’s something that I will never cease to appreciate.

Being assaulted has changed me in so many ways, both good and bad. However, I’ve been able to help others and have developed a passion in working toward change. I’ve found my voice and my strength, and that’s something that no man will ever have the power to take from me. 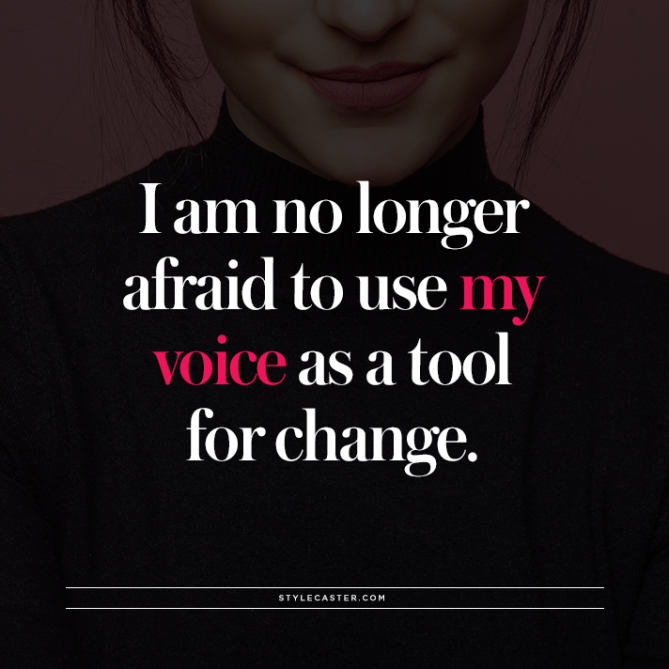 What would you say to anyone who has not spoken out about being assaulted?
The process is brutal at times, and for that, I can’t judge another survivor for not coming forward. I don’t know if I would have if I knew what would follow. It’s literally exhausting, and not every person can physically or mentally take the amount of re-traumatization that occurs when you chose to report.

But there are so many support systems that you can seek out, and at the end of the day, you are not alone. Despite the injustices that have taken place against you, there are people out there who are willing to back you and be there for you. Don’t be afraid to ask for help.