He may be a former NFL player, but Colin Kaepernick parents, including his adoptive mother Teresa and his adoptive father Rick, he’s just their son. Colin was born on November 3, 1987. His birth mother, Heidi Russo, who was 19 at the time, put him up for adoption when he was five weeks old. (The identity of his birth father is unknown.)

Colin was adopted by Rick and Teresa Kaepernick, a white couple from Fond du Lac, Wisconsin, who had two biological children: a son named Kyle and a daughter named Devon. The Kaepernicks decided to adopt after they lost two sons to congenital heart defects. In VH1’s 2018 special, Dear Mama: A Love Letter to Moms, Colin opened up about what it was like to be the adopted child of white parents.

“You have a family that you love, but you know you don’t look like. And at a young age, I understood that I was different; I didn’t understand what that meant. So, as I got older it was something that developed. As my identity developed and my place in society and my understanding of that developed, my parents and my family had develop as well,” he said. He continued,“But it’s been one that [they’ve] worked through and [they’ve] always been really loving in the process…I wouldn’t do it with anybody else.”

In an interview with Ebony in 2021, Colin revealed that there were conversations he often “didn’t feel comfortable having” with his white parents growing up.  “I wouldn’t say I have regrets,” he said. “I don’t like to look at things that way, because I feel like that’s part of our journey and path of where we need to go. [O]ne of the pieces of being Black and being adopted into a white family [is that there] are conversations that I just couldn’t have or didn’t feel comfortable having. I wish I had a mentor to turn to in those moments to be able to have those conversations to help better navigate what I was facing.”

Many of these moments were featured in his 2021 Netflix miniseries, Colin in Black & White, a six-episode drama series about his teenage years. Mary-Louise Parker played his mother, Teresa, while Nick Offerman played his father, Rick. Colin has also written a children’s book, I Color Myself Different
, which is also inspired about his childhood as an adoptee. “When Colin Kaepernick was five years old, he was given a simple school assignment: draw a picture of yourself and your family,” the book’s description reads. “What young Colin does next with his brown crayon changes his whole world and worldview, providing a valuable lesson on embracing and celebrating his Black identity through the power of radical self-love and knowing your inherent worth.” 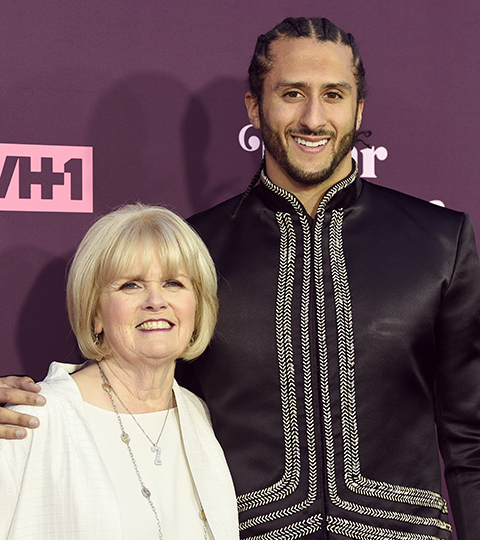 Teresa Kaepernick is Colin’s adopted mother. Teresa, who worked as a nurse throughout Colin’s childhood, is played by Mary Louise Parker in Colin in Black & White. In an interview with CBS Sports in 2017, Teresa responded to former President Donald Trump referring to any NFL player who protests the national anthem as a “son of a bitch.” In 2016, Colin inspired dozens of NFL players and athletes to organize silent protests after he kneeled during the national anthem at a San Francisco 49ers game in protest of racial injustice and police brutality. “As a mom you’re protective of your kid,” she said.”I grant you he’s a 29-year-old man, he doesn’t need my protection, but boy, somebody insults somebody you love, and your first instinct is to really wanna just go after him.”

She continued, “I saw on Twitter that he’d said it and I said to my husband, ‘What the heck.’ And I looked to see what was said and I thought, ‘Aw man, this is just ridiculous that he continues to attack private citizens like this and continues to not be able to see what freedom of speech is and that he just refuses to acknowledge those kind of things.'” After Trump’s statement, Teresa tweeted, “Guess that makes me a proud bitch!” She told CBS Sports that she was surprised by the response to her tweet, which included more than 33,000 retweets.

“I didn’t think that what I said was that big of a deal, and really kind of a typical response from me,” Teresa said. “I texted my sisters. I have four sisters and said, You’re not gonna believe this, the president just called me a bitch,’ and they went into one and we just laughed about it.” 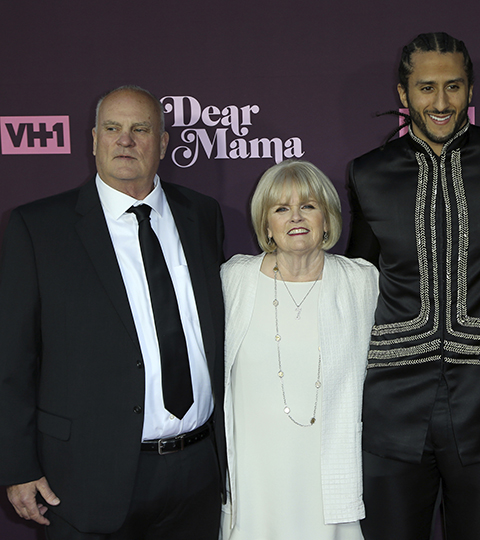 Rick Kaepernick is Colin’s adopted father. Rick, who worked as the operations manager for the Hilmar Cheese Company during Colin’s childhood, is played by Nick Offerman in Colin in Black & White. In a 2013 interview with CBS Sacramento, Rick joked that his son’s job doesn’t pay as well as his.“Yeah I still have a job last I checked. That one pays pretty well. This one doesn’t pay so good. I think every game we got closer to playoffs, it’s just ramped up,” he said.

He also told a story about how he and Teresa promised to buy Colin new tennis shoes if he did well in baseball. “We’re playing little league and Mrs. Kaepernick says ‘if you hit a double, I’ll get you some tennis shoes,’” Rick said. “Well, he had been nagging me and wanting tennis shoes that I did not want to buy,” Teresa added, “Of course he gets a double, so he’s waving around dancing and pointing at his feet, and I’m going ‘oh no.’”

Rick also reflected on what it was like to see his son compete in the Super Bowl. “It’s just fun to watch him because at end of the day, they might be 25 years old, but they’re still kids,” he said. As for what he’s the most proud of Colin for, Rick explained, “I’m really proud of him because he’s still driving his college car. He hasn’t had that urge to buy a car yet, but that’s OK…I think I want him to continue to be the person he is. Be true to yourself, don’t follow the path, and do the right thing.”

Heidi Russo is Colin’s birth mother, who gave him up for adoption six weeks after he was born. She was 19 at the time. In an interview with FOX31 in Denver in 2013, Heidi revealed that she has been in contact with Colin’s parents for several years, but she’s only talked to Colin a couple of times. The first time was when she found his profile on MySpace. It took him six weeks to reply. “I knew I couldn’t have provided my son the kind of life he deserved when I became pregnant,” Russo said of why she put up Colin for adoption. “I had him for about six weeks before putting him up for adoption, and what a blessing it was to have Teresa and Rick Kaepernick be able to step up and raise Colin.”

Heidi also denied that she came forward as Colin’s birth mother for fame. “Don’t get me wrong, I am not ‘coming out’ to share in any of the success Colin is having, I just want him to know I never stopped thinking about him,” she said. “For my family, we will just be cheering for Colin just as loud as the Kaepernicks will be, come Super Bowl.”

In an interview with ESPN in 2013, Colin confirmed that he doesn’t have plans to meet his birth mother. “Is that how you feel? That it would be disrespectful to meet with your birth mother?” ESPN asked, to which Colin responded, “No. It’s not really a respect thing. It’s just—that’s my family. That’s it.” ESPN then asked, “But aren’t you curious?” to which Colin responded, “No.” 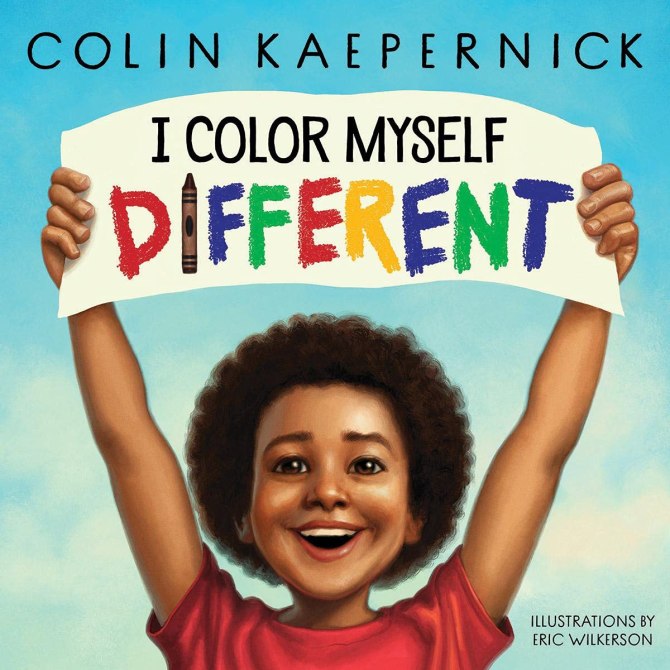 I Color Myself Different by Colin Kaepernick is available on Amazon
.