Well, well, well…how the turned tables….right. Anyway. This report that Cole Sprouse and Lili Reinhart’s relationship is stronger than ever has us doing somersaults The Office‘s Creed would be super jealous of—(if you know, you know). Remember when the two Riverdale co-stars were rumored to have broken up? Earlier this summer the internet was ripe with rumors and updates on the status of Sprouse and Reinhart’s dating life. The two young stars took to Instagram to poke some fun at the press and their fans—never fully acknowledging whether there was actually any truth to the rumors or if it was all fake news.  But the truth of it was, apparently, they did take some time apart. Lucky for us and all the Bughead fans out there, it looks like their separation did them a world of good. According to E-News!, Sprouse and Reinhart are reportedly back together and stronger than ever. That’s what we like to hear!

The couple was spotted on a dinner date in Los Angeles this weekend, and they were not holding back on the PDA. Following the release of the photos, a source told E! News that the two co-stars are back in the swing of things relationship-wise. “The two of them are very happy together,” the insider told the publication. “They’re getting along so well both on and off the set. They’re often openly affectionate and loving with one another.”

Also, Sprouse and his stunning GF apparently both act like that supposed breakup “never happened,” so it’s possible it’s true…that it just never happened. The couple was super cheeky with their fans throughout the rumors in July. They also shared the same Instagram posts with similar “f*ck you”-esque captions to the paparazzi. Sprouse and Reinhart were photographed in a joint shoot for W Magazine, and Reinhart captioned her Instagram post with, “BREAKING: A reliable source has confirmed that none of you know sh*t.” Alrighty then!

I mean, she’s not wrong. Sprouse went with a gentler touch but got the same message across.  He made fun of headlines by writing his own, albeit ridiculous, headlines for breaking news. It did go really well with the photo.

In August, Reinhart shared a loving poem for Sprouse on his birthday, penning some truly sweet sentiment.

I tried to find a poem
that I could send to you.
Because my words were failing me.
But I searched and found nothing that did you justice.
All of these love poems can’t get it right.
No one else’s words could ever fit.
They haven’t known the fortune it is to love you. -sappy nighttime birthday poem for @colesprouse

Shortly after this profession of ~love~ Sprouse returned the favor with a cute note to his one and only on her birthday. The actor shared a collage of photos with Reinhart. “Lil @lilireinhart was born on a Friday the 13th and haven’t I just been so lucky ever since?” 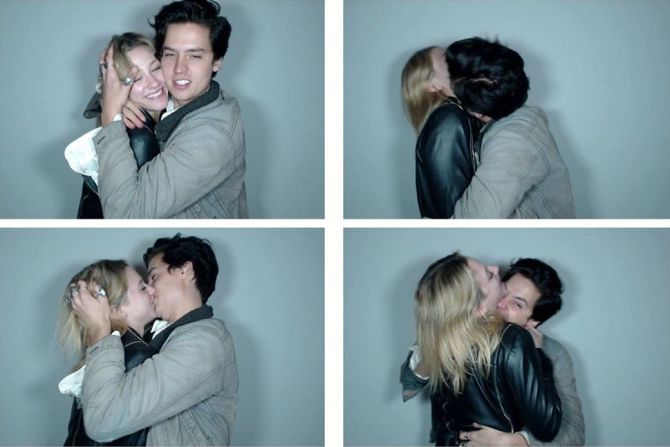 Also—just in case you aren’t convinced, Reinhart straight-up called the former Disney Channel star her BF in a recent interview with Coveteur. “I think I’m leaning in towards a character for Halloween,” she told the publication. “I think I’m going to do it with my boyfriend, Cole.”