Supermodel Coco Rocha, 30, began her career in 2004 after she was scouted at an Irish dance competition in Canada. Since then, she has built a career that young women dream of, appearing on covers of Vogue and walking major runway during fashion week. Rocha even wrote a book, titled Study of Pose, which is considered an encyclopedia on striking the  perfect … well, pose (for lack of a better word). She also appeared on an episode of Keeping up with the Kardashians, where she coached Kendall Jenner on her budding runway walk and career. And though Rocha has a successful modeling career now, including a camp for aspiring young models, her path wasn’t easy.

At Canada Goose’s Project Atigi launch event, which celebrated the release of a collection of parkas hand-crafted by 14 Inuit seamstresses from north Canada, Rocha tells StyleCaster about her early career and how she’s been speaking out about sexual harassment in the modeling industry—to the point that she’s lost jobs—for more than a decade. And though Rocha is happy to see change, with movements like #MeToo and Time’s Up, she considers the progress “very late.”

“I don’t know if I necessarily see a difference in my personal career because I’ve been vocal for a over 10 years around my situations, and I was vocal with many girls. And a lot of them, and myself, we lost jobs. It was because of [speaking out], and it was frustrating at the time. I am happy that this is changing and happy that we’re evolving and moving forward, but it is also very late—when there was a lot of us speaking out.” 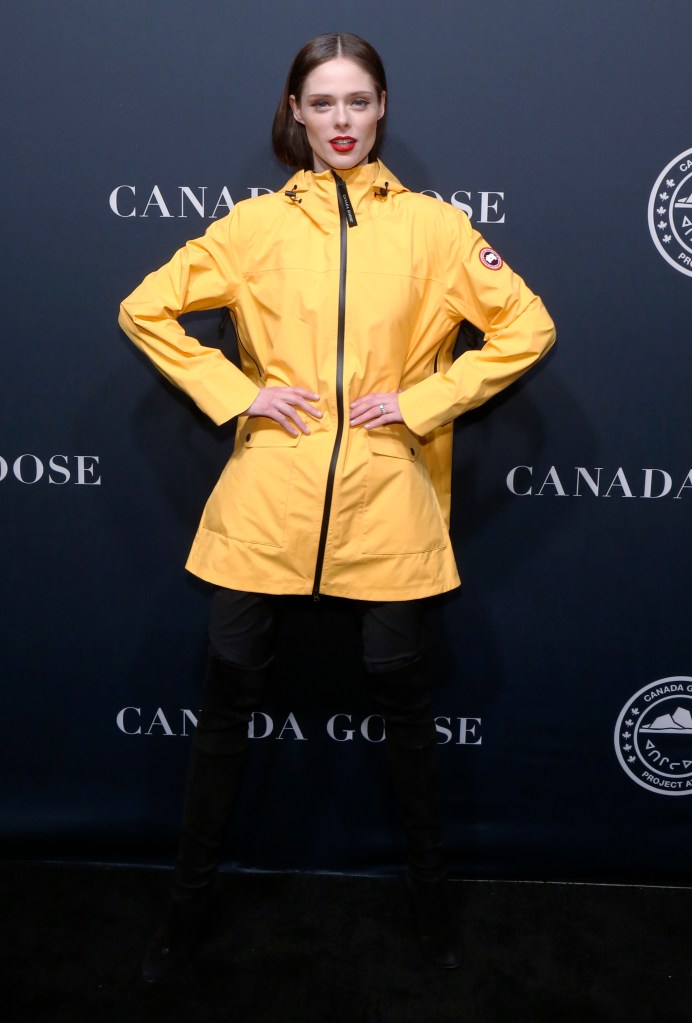 Harassment isn’t the only dark side Rocha has seen in the modeling industry. In 2010, she wrote an essay for Seventeen about how she was pressured into losing weight, which led her to misuse diuretics. As for where the fashion industry is today, Rocha thinks diversity—whether skin color or size—is improving. “I think the industry is trying very hard to open up and show diversity if that’s skin color, nationalities, religion, weight, size, which is great. We’re slowly getting there,” Rocha says.

Rocha’s experience led her to create the Coco Rocha Model Camp in 2018. The camp, held in Rocha’s second home in New York, is a four-day program, where Rocha teaches the ins and outs of the modeling industry to a class of around 14 aspiring models. “I know sometimes when people think of model camp or model school, it’s very cliche. They’re like, ‘What? Do you teach them how to put makeup on and how to walk?’ It’s more than just walking and posing. It’s teaching them about contracts and agencies and how to be a real, powerful woman in an industry that can be very tough sometimes.”

The program has received glowing testimonials from industry leaders, such as Gigi Hadid and Cindy Crawford. Rocha’s husband and the Creative Director of Coco Rocha Model Camp, James Conran, explains Rocha’s intentions with the camp. “Really, she wants to be the kind of mentor that she didn’t have when she was younger and help the younger generation to have a really great experience in fashion, enjoy themselves, hopefully, make some money as a business, but stay away from the negatives and the dark side,” he says.

He explains that a common misconception about modeling is about the pay. “Some of the girls at the camp have been working for a few years, so the already have a good baseline understanding, but some newbies [do not],” Conran says. “As far as the kind of jobs that pay money, that’s often the misconception. They think [that if] they’re on the cover of a magazine, you’ve just made six figures, but you’ve just made $170 for that cover.”

“Usually, they’re super shocked at the end of that class, like, ‘Why do I want to model?'” Rocha jokes.

Conran adds, “We really try—because we invite the girls, it’s not automatically you come—to weed out the ones that just want to be famous, [who] just want to be a known model for the sake of being known. We really want the girls who want to make it an art form and who view it as a profession. Those are the kind of girls we’re looking for.”

As for if Rocha’s 4-year-old (and Instagram-verified) daughter, Ioni—who was seen in an adorable Instagram video cheering on her mom as she walked for Jean Paul Gaultier in Paris last month—Rocha had the following to say: “Who knows? Maybe she’s just been oversaturated right now to the point of, ‘I’m done. I never want to do this ever again,’ or she’s going to continue loving it.”

Conran adds, “Right now, she’s obsessed. She loves everything about this, but when she’s 13, will it be the same? I don’t know. We’ll see. She may [rebel] and want to be a mathematician or something.” As for Rocha’s younger son, Iver, who is only 8 months old, Rocha says, “His interest is trying to crawl right now.”

Once crawling turns to walking and talking, one thing is for sure: Iver and Ioni have one of the greatest models in their mother. (Pun completely intended.)