As a mother of two, Cobie Smulders, best known for her roles in How I Met Your Mother and The Avengers, values her family. It’s one of the reasons why she recently partnered with Frito-Lay to promote the brand’s “Dreamvention” program, a contest where families from around the country submit their best and most creative inventions for making day-to-day life easier.

“I was very excited about enticing families to spend time together creating, inventing,” Smulders tells StyleCaster. “I’m a mom, and I think that it’s very exciting to try to solve an everyday problem yourself. I just think in this day in age, everyone’s on their phones. Everyone is in their own bubble, and it’s important, especially from a childhood education standpoint, to get kids excited about building, about problem-solving.” 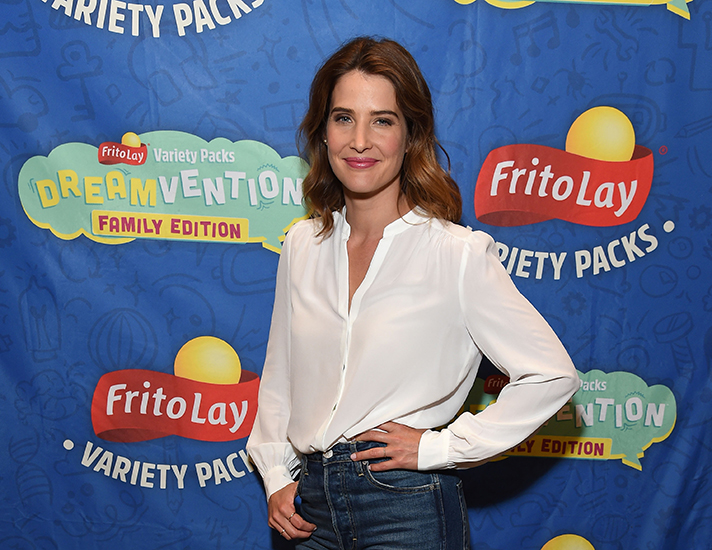 With her parenting problems out of the way, Smulders also revealed a few secrets she swears by to stay healthy and keep moving—especially as someone who’s guilty herself of spending too much time on her phone. Smulders may play the fast-food craving, wine-drinking lawyer Lisa, on Netflix’s Friends from College, but her actual lifestyle could not be more different. Read on for her best health secrets.

MORE: 7 Winter Vegetables That’ll Give You a Cold-Weather Glow

For breakfast I had: Juice and oatmeal. I try to eat something in the morning, but I’m not a big morning eater. But I do try to do a smoothie or green juice every morning.

Today I snacked on: Some delicious Sun Chips. I like the Harvest Cheddar.

My go-to healthy drink is: Green juice. I’m a big juicer. I sort of learned that me and juiced kale are good friends.

My favorite workout is: Pilates. I’m a big Pilates girl. And I’ve recently gotten back into dance. There’s this type of dance called PlyoJam. I like to do any exercise that has really loud music. I was Spinning for a while, but I’ve gotten back into this dance class and Pilates.

My guilty pleasure food is: Macaroni and cheese.

The one thing that always gets me motivated to work out is: I learned actually through doing movies where I had to do a lot of stunts and training how much I need exercise just to keep my mind healthy. I did this movie called Jack Reacher 2, and Tom Cruise was in it, and we trained for two months before the movie even started. It was really intense, but I learned a lot, and what I learned about myself is that I need to work out. Now as an adult I’m realizing I have to do this just to keep myself sane.

My favorite healthy restaurant is: I really love sushi so that’s a pretty healthy thing. I live in Los Angeles, so there are a lot of healthy places. I usually try to eat salads and keep it healthy sort of everywhere I go. There’s one called Sage that’s in Culver City that I really like, and it’s vegan,  but it’s not necessarily healthy. I just try to order wisely.

MORE: The Nutritionist’s Guide to Eating Healthy During Your Busy Season

The three ingredients you’ll always find in my kitchen are: Old-school Irish butter in a jar on the counter, avocados and Himalayan sea salt.

My biggest health tip for travelers is to: Powdered greens. I’m sort of a constant walking natural pharmacy. I’ll have like ginseng and I’ll have so many weird bottles. But what I do use a lot is I’ll pack individual things of greens, like powdered greens. I just put it in water or put it in smoothies to make sure I’m getting enough greens in a day. So I’ll bring that and just put it in a bottle of water and chug it and know I’ve gotten some vitamins and minerals for the day.

My signature healthy dish is: A rice cracker with hummus, avocado, sea salt and lemon.