Heading to Coachella this year? Have you considered picking up a Coachella-specific boyfriend for the occasion? These two girls did, with this rather incredible Craigslist ad detailing their dream guys for the festival weekend.

In order to hang with these two “fun-loving girls,” interested guys must be “approximately 30% bro (don’t lie, there is a little of it in all of you—just admit it to yourself and save us time, 7.5% hipster/indie, 12.5% raver and 50% normal.”

The girls then go on to detail a litany of requirements, including age, height, and physical stamina. Why physical stamina? Oh, because one of the main duties of a Coachella Boyfriend is to hoist these to ladies up on their shoulders for the duration of their favorite musical acts (which are listed as Outkast, Adventure Club, Zedd, Fatboy Slim, Big Gigantic, Kid Cudi, Calvin Harris, Ellie Goulding, Gareth Emery, Alesso, Lorde, Duck Sauce, and something called Showtek.) 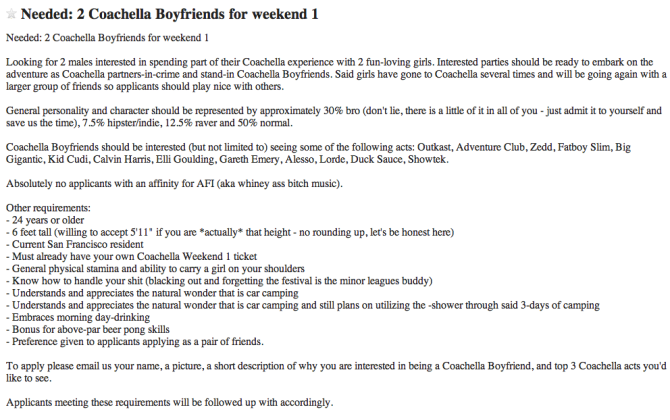 You’d think that the above requirements would be enough to deter most guys from wanting to be a CB, but nope! The girls even received a Tumblr-based application from two guys—Alex and Adam, who by all accounts, seem to be pretty funny. Even if they don’t become these girls Coachella Boyfriends, they definitely should become someone’s Coachella Boyfriends.

We wish these two enterprising girls good luck in finding the men, and/or the human ladders of their dreams. Because attractive young ladies should never have to day-drink or car-camp on their own.