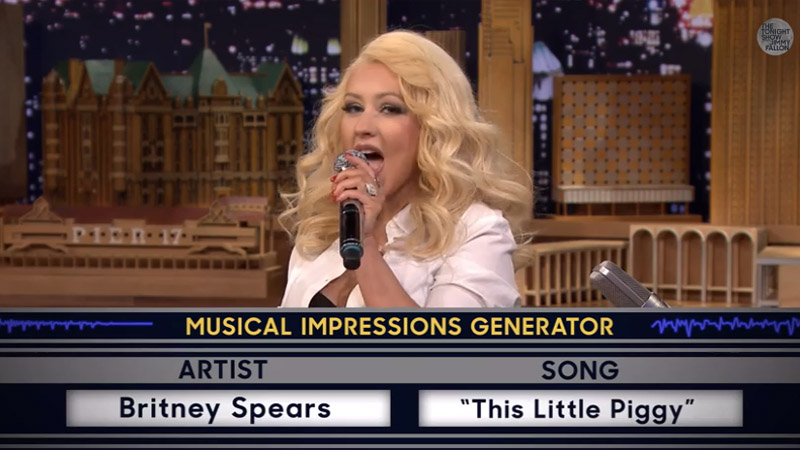 Hats off to “The Tonight Show” host Jimmy Fallon—the man seems to have an incredible knack for making pop culture moments we wish would happen, well, happen (ahem, that epic “Saved by the Bell” reunion.) But last night, he kind of outdid himself when he got Christina Aguilera to impersonate a host of pop stars, including her former rival Britney Spears.

Here’s what went down: Fallon—who happens to be a master of mimicking celebrity—went head to head with Christina in a game of “Wheel of Musical Impressions,” during which they both had to impersonate famous singers at random. Aguilera’s included Cher singing the Folger’s coffee jingle, and Shakira‘s rendition of “The Golden Girls” theme.

However, none could top what happened when Britney’s name popped up on the wheel, and Christina had to pretend to sing “This Little Piggy” in Brit Brit’s signature breathy style. Basically, it sounded more like Spears singing than when Spears actually sings.

Watch the clip below, and let’s start petitioning Fallon to have Britney do “Genie in a Bottle” stat.

To be fair, this isn’t the first time Christina proved her impersonation skills—she wowed the world in 2002 with her impression of Samantha Jones in a “Sex and the City” parody, which we also included below!