Wearing what can only be described as a white power suit and a thick layer of fire-engine-red lipstick, Ariana Grande sashayed onto the stage last night on “The Voice” season 10 finale and slayed, diving right into her new single “Into You.” Backed by a bevy of male dancers in business casual attire and a flock of smoke machines, Grande whipped her high pony around and primed the crowd. And then. She segued into her song “Dangerous Woman,” Christina Aguilera showed up, and the crowd went totally bananas.

“Nothing to prove and I’m bulletproof and know what I’m doing,” Aguilera announced, strolling onstage in a NSFW black suit cut down to there with a gang of women wearing their own take on business casual. Then she and Grande threw down an epic duet and hugged it out at the end. 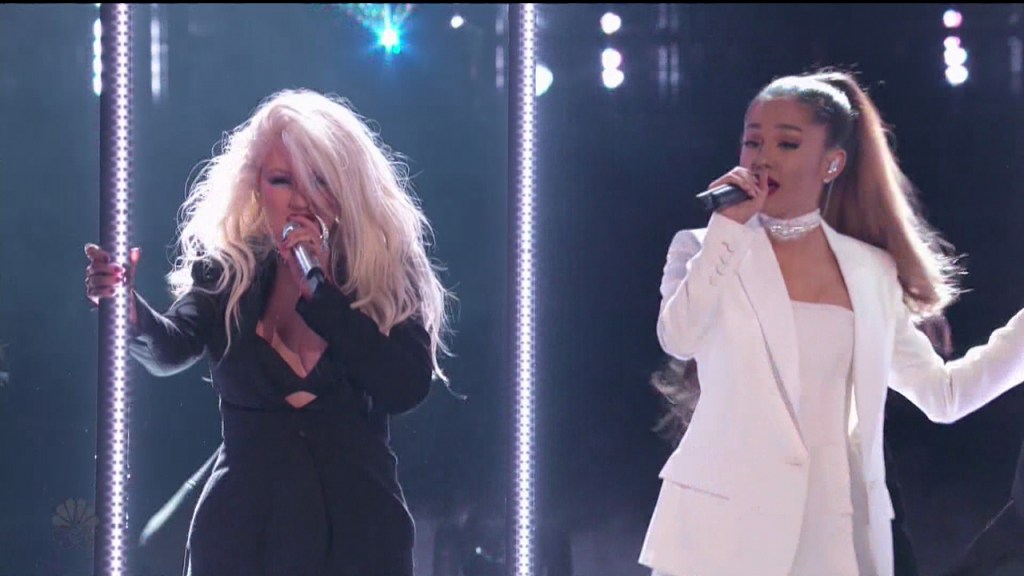 It’s been a big week for Grande, as she just released a new album, Dangerous Woman, five days ago; both songs from her “Voice” performance are from that LP. Aguilera had a big night last night too, becoming the first woman “Voice” coach to land a win on the show in 10 seasons, with her mentee, Alisan Porter, crowned the victor of the competitive singing show.

Originally, Aguilera was supposed to hit the stage with a hologram of the late Whitney Houston, but her estate pulled the plug on that one. “Holograms are a new technology that takes time to perfect, and we believe with artists of this iconic caliber, it must be perfect.… After closely viewing the performance, we decided the hologram was not ready to air,” Pat Houston, executor of the iconic singer’s estate, told Entertainment Tonight last week. So, technically, this means Grande replaced a hologram, but—details, details. She killed it, and so did Aguilera.