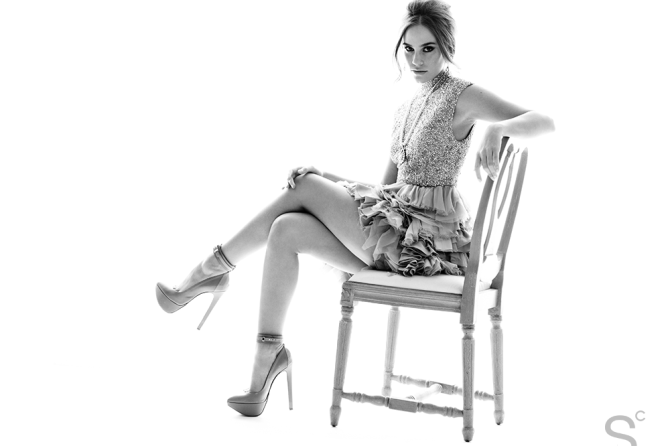 When it comes to Sunday nights, our TVs are always tuned into ABC’s addictive nighttime soap “Revenge.” The dramatic tale of crime and intrigue—set in the glamorous backdrop of the Hamptons—is one of the week’s best escapes thanks to a riveting plot and excellent cast, including break-out star Christa B. Allen as Charlotte Grayson, the youngest child of the most dangerous family on the East End.

The 21-year-old (who, as a fun sidenote, has actually played a young Jennifer Garner on two occasions), recently stopped by the StyleCaster offices and posed for a holiday hair editorial for Beauty High. While the gorgeous brunette was here, we couldn’t help but ask about this season of “Revenge,” her favorite fashion moments from the show and her style icons. Read on to see what she had to say!

StyleCaster News: Your character, Charlotte, has obviously been through a lot. What can we expect from her in the future?

Christa B. Allen: It’s going to come out at some point that Emily, or the woman we know as Emily Thorne, is actually Charlotte’s sister. At this point Charlotte thinks it’s some random girl! Once that comes to light, I think Charlotte will dive more into David Clarke’s past and find out more about the story — the same way Emily does. It would be really interesting to see Charlotte team up with Emily and do a little investigative work for herself.

What’s your favorite part about being on the show?

First of all, it’s an amazing part to play. There’s so much to do. It’s also provided me the opportunity to meet so many new people and do a bit of traveling. This is my first trip to New York City. I’m going to get an authentic New York pizza! [Ed note: We later surprised her with the pizza here in our offices!]

Who do you look to for style inspiration?

I’ve always really appreciated Olivia Palermo and how put together she is. I mean, the woman can be going to a grocery store or running errands, and she’s always so put together — even in the most casual of outfits.

Is there anything in your closet that you’ll never throw out?

It’s the silliest thing, but my mom was quite hot when she was younger. She had this incredible white polyester jumpsuit. It zips up the front, kind of Elvis meets the ’70s. The back of it is lace, and it’s got a hood. Something about it is actually quite sexy. I’ll see if I can ever pull it out again, but I’ll never throw it away!

When you look back on the show, what’s the favorite thing that you’ve gotten to wear?

There was an amazing Dior dress — it was short and pink and white. It was a bit Alaia-esque in the fabric. It was the most delicious thing, and it was what I wore on the episode where Charlotte finds out she’s not Victoria’s daughter!