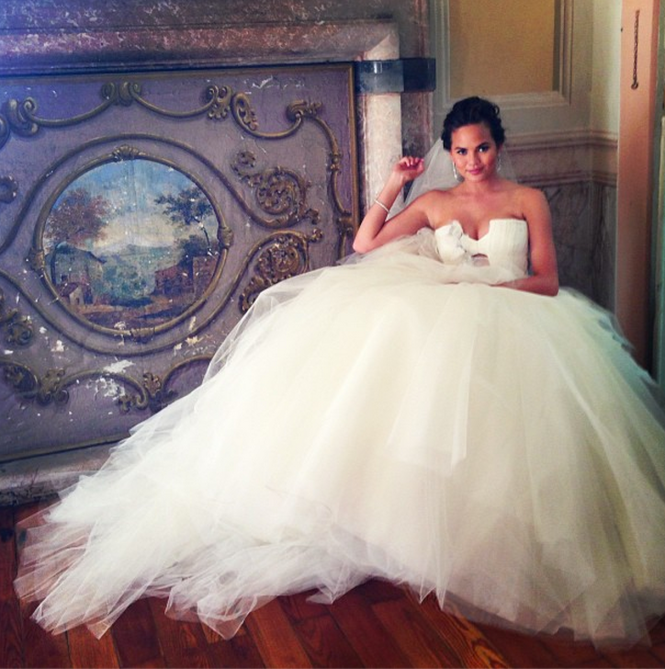 Finally! After dating since 2007 and getting engaged in December 2011, R&B superstar John Legend and his Sports Illustrated-model girlfriend Chrissy Teigen tied the knot this weekend. The wedding was held in lavish Lake Como, Italy (ah, to be young and filthy rich), and the weekend’s festivities were attended by Kanye West, Stevie Wonder, and Teigen’s maid of honor Brooklyn Decker.

For the big day, 27-year-old Teigen enlisted the help of top notch bridal designer Vera Wang, and wore not one but three of her pricey gowns. The above shot, which Teigen posted to her Instagram almost immediately following the celebration, is a glimpse at her V-neck dress that she wore to the ceremony. It should come as no surprise that she went with Wang, as she and Legend were seated front row at the designer’s runway show last week in New York.

No other details have surfaced about the event, but in February 2012 when we shot Teigen for a food-themed editorial, she was completely clueless about the wedding plans. In fact, she stated that she had one priority: “I want everybody drunk,” she stated. “A cocktail session before the ceremony, and in between the ceremony and reception as well.” No word on how that turned out, but we’re pretty confident she made it happen.

What do you think of Chrissy Teigen’s Vera Wang wedding gown? Sound off below!