Nobody does witty roasting like Chrissy Teigen. The Twitter queen really has a way with words, and she proved it again earlier this week. Teigen roasted hubby John Legend’s “Sexiest Man Alive” win in the best way possible. People deemed Legend 2019’s Sexiest Man Alive, and his wife just couldn’t let him get away with that without some serious jokes. Before People announced the win, the former Sports Illustrated model shared this cryptic tweet: “I have big news and it’s killing me I can’t say it and it’s not a baby.” So clearly, she was excited for the news to break. At the time, fans were significantly confused, wondering what the heck was going on in Teigen’s world and what the surprise news was going to be. Well, it was a great treat. And after it was announced, Teigen took to Twitter once again.

“My secret is out,” the mom of two tweeted. “I have fulfilled my dream of having boned @people‘s sexiest man alive!! an honor!!!!!” She followed it up with an incredible hashtag—#EGOTPSMA. In case you’re wondering what all those letters stand for…Teigen was equating her husband’s People’s Sexiest Man Alive Award to his EGOT title. “EGOT” stands for the four biggest awards in the entertainment industry: Emmy, Grammy, Oscar and Tony. Legend made history in 2018 when he won an Emmy at the Creative Arts Emmy Awards along with Andrew Lloyd Webber and Tim Rice for producing the best variety special winner, “Jesus Christ Superstar Live in Concert.” This completed his journey and Legend became one of the youngest EGOT winners. He was also the first African-American to snag that title. So Teigen’s hashtag? Brilliant. The roasts keep coming and they don’t stop coming.

Teigen then shared her children’s reactions to their dad’s big news. “The kids…do not care” Teigen wrote alongside a video of Miles and Luna. Miles is crying somewhere in the background and Luna seems far more concerned with whatever moving they were planning to watch than her dad’s new title.

She then made a Starbucks cup reference writing, “I cannot WAIT for people to get mad about John being the sexiest man alive. it’s my new Starbucks holiday cup.” What we want to know? Did the inevitable fire commentary from Teigen play any role in People’s decision making? Because we know Legend is an outstanding guy and super handsome but like, his wife’s tweets are making the title even better.

She then piled on to her husband’s tweet writing, “yeah but let’s see an @idriselba pic from 1995 (prob still very hot)”

Teigen then just totally laughed her husband’s animated cover. He can’t get away with anything! 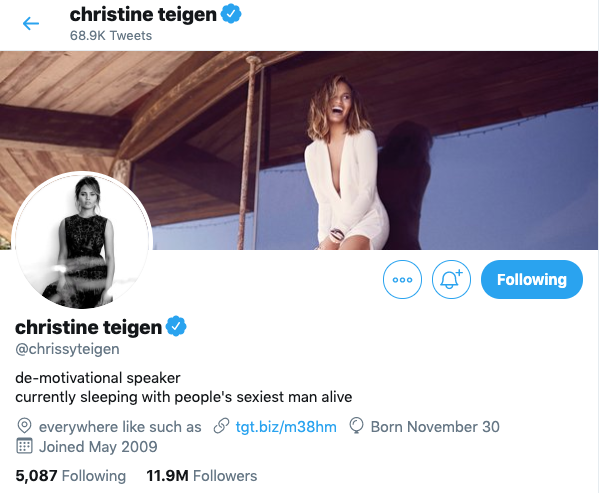