Chrissy Teigen is never shy to show her real self on social media—lopsided boobs and all. On Thursday, the 32-year-old model posted a relatable Snapchat proudly displaying her lopsided boobs from months of uneven breastfeeding.

The picture showed an aerial view of the “Lip Sync Battle” co-host’s cleavage, with one breast looking noticeably larger than the other. In her caption, Teigen admitted that the lopsidedness was a result of nursing her 1-year-old daughter, Luna, from one side. Given that she’s pregnant with her second child with her husband, John Legend, the Cravings author also made sure to note that the disproportion was from her past breastfeeding experience, as not to suggest that she already gave birth.

“View from above. I really should have nursed out of both boobs (when I nursed),” Teigen wrote. 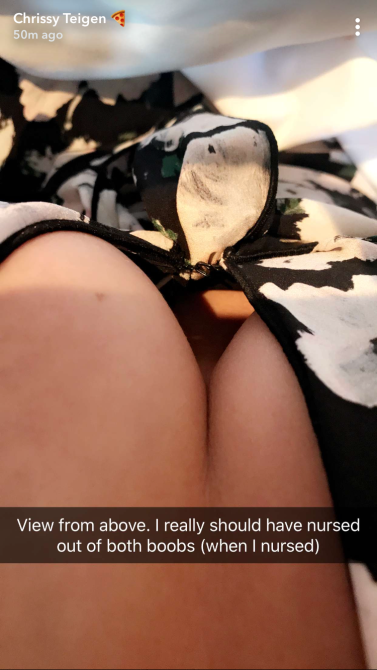 MORE: Chrissy Teigen Is Being Body-Shamed for the Size of Her Baby Bump

Lopsided boobs aren’t unusual for first-time moms. The unevenness, which is already a natural trait for many women, is caused during breastfeeding when the baby prefers one breast over another, resulting in simple supply and demand, according to an expert at Breastfeeding Basics.

The size could be because one breast naturally produces more milk, which causes it to engorge larger than the other. Given that Teigen is in the midst of her second pregnancy, her breasts are changing to prepare for breastfeeding.

MORE: Chrissy Teigen Calls Out ‘Shitty Friends’ Who Sold Details About Her Pregnancy to the Tabloids

Though there are a lot of reasons why one of Teigen’s boobs might be bigger than the other, one thing is for sure: She isn’t afraid to shut down body stigmas, something we always love her for.