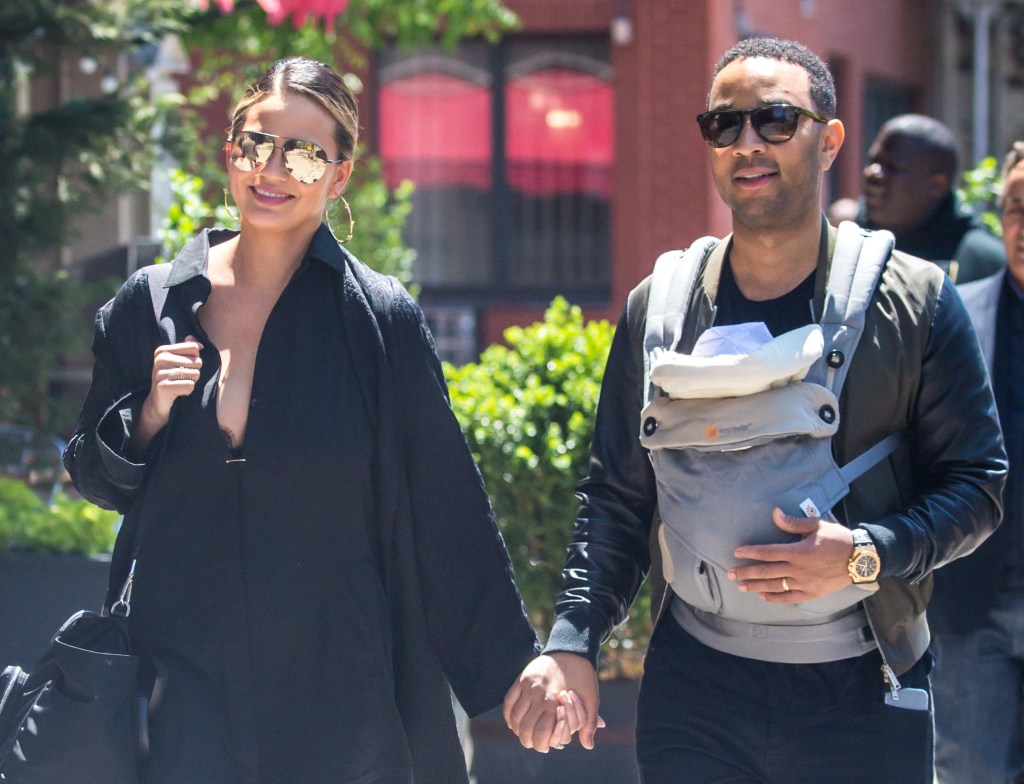 Chrissy Teigen appeared on “Good Morning America” this morning in serious bombshell mode, rocking a strapless green dress and sporting world’s first post-pregnancy glow, with her hair slicked back in a low pony and adorned with only a gold choker around her neck. Though she gave birth to baby Luna Simone Stephens just a month ago, on April 14, Teigen professed that she’s back on her game already: “I kind of bounced right back into the stream of work and cooking again—it’s been really fun.”

The infamously loquacious model wasted no time getting candid with Michael Strahan, who appeared on “GMA” for the first time today since his controversy-steeped departure from “Live!” “I was already awake,” Teigen told Strahan. “Usually this would’ve been a hard wake-up for me, but I was already up, feeding.” (The talk show shoots live every weekday from 7 to 9 a.m. ET)

Being a new mom is a challenge, but Teigen seems to be taking to it well: “There’s just no planning for anything anymore, which is hard for me, but it’s been really fun,” she said. Though she admitted that her husband, John Legend, has been nothing short of wonderful with baby Luna, she tried to dispel the rumors that paint Legend as being too good to be true. “Everyone already thinks John’s so perfect, so I love to kind of twist it and make sure people know that nobody’s perfect, but he has been really great, I will say,” she said.

But don’t expect a children’s album from the Grammy- and Oscar-winning singer anytime soon, Teigen added. “We tried to think of a bathtime song, and I’ll just say—that’s winning no awards. It’s horrible. I think he’s used to something a little deeper. We need to get him into children’s books more.”

Funny there's no dad-shaming. When both of us go out to dinner, shame both of us so Chrissy doesn't have to take it all. We'll split it.

As for all the mommy-shamers out there, Teigen didn’t mince her words. Though people lashed out on social media about Teigen and Legend’s date night after Luna was born, Teigen brushed it off by saying, “It was about nine to 10 days after, or something, so, I mean, we needed a break. We needed to go enjoy each other’s company and be out, and I used to read mommy blogs like crazy, so I knew mommy-shaming was a thing, but I didn’t think it would come from going to dinner. That wasn’t something I thought would happen. But, listen: We were gone for an hour and we had a good meal together. I think—happy mommy, happy daddy, happy baby.” For his part, Legend tweeted that if people are going to mom-shame, they should dad-shame too. “When both of us go out to dinner, shame both of us so Chrissy doesn’t have to take it all. We’ll split it,” he suggested.

Once she had gotten that off her chest, a gold-stiletto-clad Teigen joined Strahan in the kitchen to make a recipe from her cookbook, Cravings, known simply as “John’s chili.” Perfect.