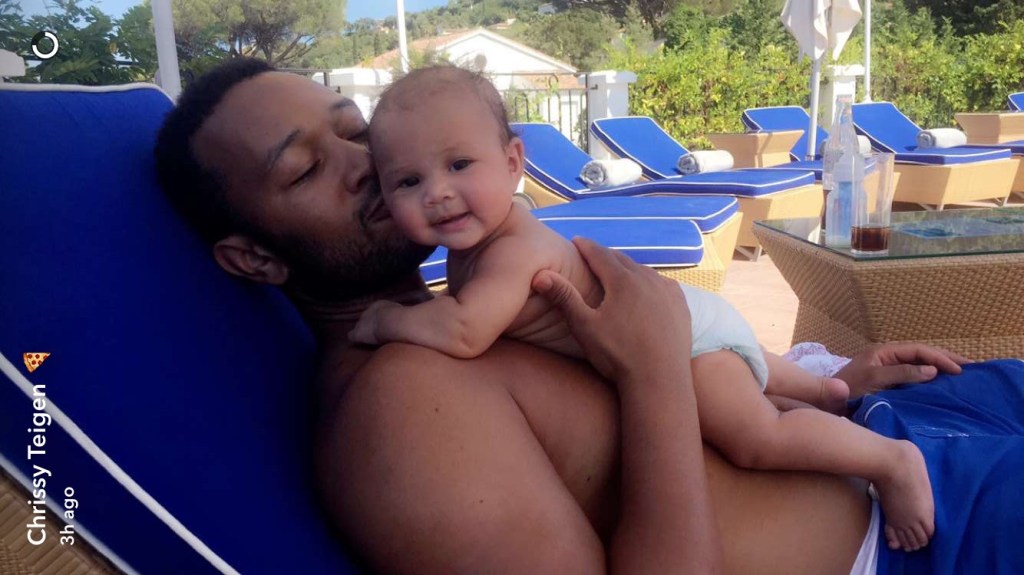 We all know that Chrissy Teigen and John Legend have a cute baby, Luna, but the latest Snapchat of their sweet three-month-old is particularly adorable. After Snapchatting her way through a three-Michelin-star dinner in Saint-Tropez, Teigen posted a simple shot of little Luna in Legend’s arms today, basking in the glory of the late-afternoon Mediterranean sun.

Unlike BFF Kim Kardashian, who keeps seven-month-old son Saint largely off social media (though he did make a rare appearance yesterday), Luna pops up in Teigen’s feed on the regs. Whether Teigen’s rocking her to sleep before she sneaks out to hit up a Beyoncé concert in Berlin, Legend’s taking a turn lulling her to sleep by playing his new album for her, or, you know, she’s just dressing up like a mermaid, Luna is a social media star in her own right.

When the time comes, we can bet we’ll see Snapchats of little Luna learning to swim. Teigen told People that they “absolutely” want to teach their child how to swim ASAP—but first, they need to find a swim teacher for themselves. “I can’t swim, but I’m trying to learn for Luna,” she said. “There is nothing I want to do more than to get her into the water and for her to learn to swim.” Same for Legend: “John can’t swim, either,” she added. “And we don’t want to be helpless in any way, so we’re going to try to learn for Luna. We’re going to have someone come to the house.” Looking forward to the Snapchat of that one.