Ever since R&B singer John Legend and model Chrissy Teigen exchanged vows in September, life has been coming up roses for the newly-minted Sports Illustrated Swimsuit Issue cover girl.

Fresh off a plane from the Oscars, we met up with the 28-year-old for a one-on-one at London Fog’s designer collection debut, where we were surrounded by new rain gear pieces by Cynthia Rowley, Chris Benz, and Badgley Mischka. During our chat, Chrissy shared her number one piece of advice for single women, and she let us in on what life was like at home with her new husband. 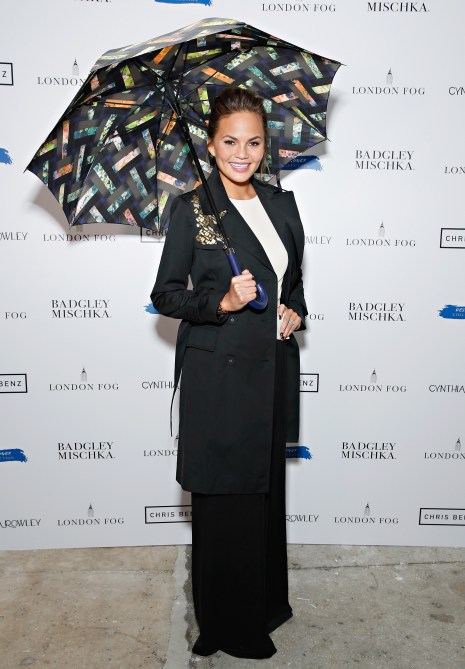 A belated congrats on your Italian wedding! How was it?
It was amazing. Everyone turned it into a little vacation, guests stayed a week after, they came a week before, they were even there after we got back from our honeymoon. I can’t believe we’ve only been married since September! I feel silly saying I’ve only been married for a few months, I really want to be like, ‘seven years’.

Is husband John different than boyfriend John?
He’s the same. He’s so easy and effortless, he’s so loving and wonderful. If anything, we’re just more comfortable and more real around each other, we’re in it for the long haul. We’re so lame when we’re at home together. We get to do all these crazy-fun events that are so glam, but at home we’re really just lazy. People have pitched us crazy things like, ‘do we want to do a reality show’ then I’m like, no– who’s going to watch us watch ‘Housewives’ for eight hours?

What relationship advice do you have for the single girls?
I love hearing everyone’s dating stories, because I never really dated, I was always in long-term relationships. For women out there, don’t settle. I think back and say, ‘oh my gosh what if I would have married so-and-so!?’ Sometimes it seems tough but that time comes and that person comes just wait for him. That’s it.

Twitter followers and Perez Hilton both stirred up a poop-storm with your tweets at the Oscars.
I got so excited I was tweeting about sitting close to Angelina Jolie and I accidentally wrote ‘shitting’ instead of shutting. I tweeted “Omg so close to Angelina, body is shitting down” instead of SHUTTING down. I put my phone away and it kept vibrating and I realized everyone was making fun of me for writing shitting, then I just started looking around the room and gave everyone poop names. The worst though is that some people only caught the second end of it and so it looks so disrespectful to all the Oscar nominees and winners, but obviously I respect and love these people it was really making fun of me and my spelling mistake.

Glad we cleared that up! Who was best dressed in your eyes?
Kate Hudson was best dressed, no question. That was flawless to me. It was cool to see Jared Leto get up there and that was the sweetest speech about his mother, you think of him as just this rocker and so that was very cool to see.

Congrats on Sports Illustrated! Has becoming the cover girl changed anything?
SI gives you a lot of credibility. To be in the issue is amazing but to have the title of Sports Illustrated Swim cover model, people start listening and paying attention to you more. It’s been huge for me, not only is it one of my only covers, but it’s also one of the biggest covers I could ever imagine in life.