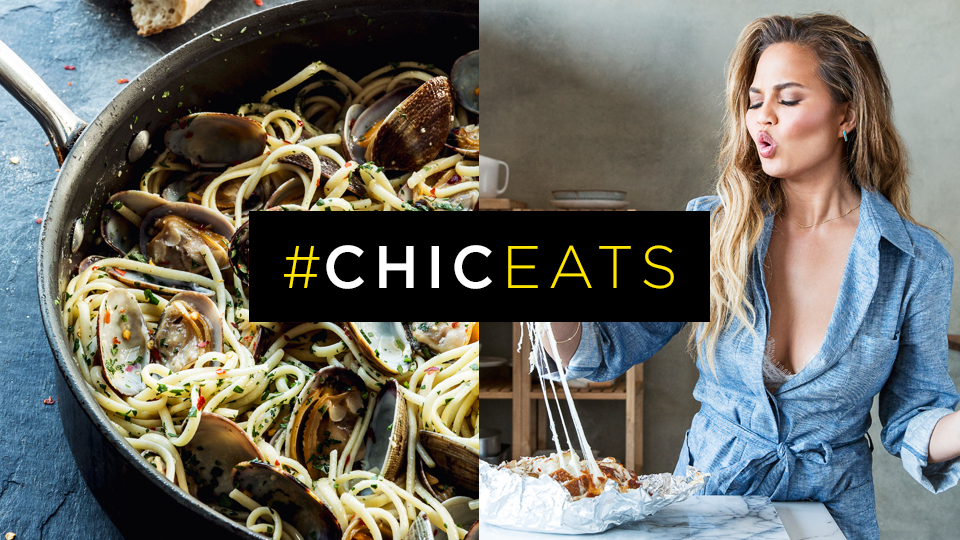 Photos: Reprinted from Cravings: Recipes for All the Food You Want to Eat. Copyright © 2016 by Chrissy Teigen. Photographs copyright © 2016 by Aubrie Pick. Published by Clarkson Potter/Publishers, an imprint of Penguin Random House LLC

Cookbooks can very easily go the route of taking themselves too seriously, but that’s definitely not the case when it comes to model Chrissy Teigen‘s first release, Cravings. A chapter titled “Shit on Toast?” A chicken recipe inspired by bagels? Those two things, as well as plenty of  photos that show Teigen glamorously chowing down poolside, solo, and with husband John Legend, fill the pages, making this way more exciting and approachable than just a compilation of things to cook.

Teigen’s always had an interest in food, and—during the last few years—managed to leverage it into a selling point (this is a woman who can easily get a quarter of a million likes for posting a photo of salad on Instagram). That being said, Teigen clearly takes it seriously. She has been writing her own blog full of recipes and food experiences long before Cravings was released, and one of her favorite things to do while traveling is lugging multiple cookbooks on her carry-on to read for fun.

We caught up with Teigen to talk about what the process was like writing a book, where her love for food came from, and her guiltiest (edible) pleasures.

StyleCaster: First of all, is there anything you’d never eat?

Chrissy Teigen: I can’t think of it. I once got into a discussion [about whether] I’d try a chunk of human meat, and I’m not positive I wouldn’t. If there was someone who gave up their body to the culinary world and wrote this long letter that their only dying wish was to be cooked by a Michelin-starred chef, I’d probably try that meat.

What was your absolute favorite part of working on the book?

My favorite part was waking up every day and being able to throw out a text to my coauthor, Adeena Sussman, with a random, weird idea and then going downstairs and making it happen. You want everything to be technically perfect in a cookbook. I love to cook, but I needed Adeena.

It was fun to throw out some random words and random ideas, order groceries online, then go downstairs and make it happen. To me, it wasn’t tedious, it wasn’t annoying to make those adjustments. It was cool to feed John and feed each other and get things perfect. You’d think the photo shoots would be my favorite, but no, it was the actual brainstorming process.

What was one of the craziest ideas you had that you managed to pull off?

I wanted everything to have a twist, and I think one of the fun things we made for the book was the Everything Chicken Sandwich Melt, which has all the flavors, spices, and herbs of an everything bagel, but without the bagel part. Given the chicken in it, it ends up being so tasty, so flavorful, and just like an everything bagel. I’m so proud of it; I’ve been thinking about it for so long, but to actually make it happen is so cool.

Who taught you to cook?

I’m just a home cook. I think the more I do it, the better I get at it. I grew up around people who love to cook. My mom and dad both cooked, but it wasn’t necessarily like they taught me to cook. I was up on the counter watching them. I would never, ever in my life say that I’m a chef. That’s always been weird to me.

I think [the Web] has taught me a lot and watching the same shows that everyone watches on Food Network every day. I really think anyone can cook if they can read. That’s always been my big thing about cookbooks. I carry them when I travel. I just love reading the tips and tricks. I’m always so thrown by people who say they can’t cook, because it’s not true. There’s just a certain way to read a recipe, and little tricks like reading the entire recipe before you start that make you a better cook.

You really travel with cookbooks?!

I’ll carry four or five in my carry-on and a ton of Post-Its. I love flipping through, returning home, and making [recipes]

. I love Ina Garten, I think one of my favorites is How Easy Is That? Really small, impressive, wonderful, simple things are inside. Giada at Home is also good. The Momofuku cookbook is one of the ones I love to cook [from], especially when I have an entire day off and I want to impress somebody. There’s nothing like making a pork belly lettuce cup with mustard seed sauce. So delicious and so unique. John will make the smoked chicken wings and it’ll be complete chaos in our house. I love that.

Do you have a guilty pleasure when it comes to food?

I come from a family where carbs really catch up to us a lot quicker than normal people. For me, a guilty pleasure is something as simple as a sandwich. Because I look at John all the time, and I’m like, “Isn’t it funny that we’ve never been able to just go and get a sandwich?” It sounds so dumb and so simple, but I don’t have the kind of body type that I can eat a sandwich for lunch every single day. I would blow up! So, it’s the simple things.

Where’s your favorite place in the world to eat?

Italy, hands down. We fell in love there. Lake Como is where we got married. I think half the reason we even fell in love in the first place is devoted to this one night where we took this little boat to this tiny restaurant that this couple ran out of their home. They had two or three tables set up on their beach at Lake Como. They had only three things on the menu, but they brought out a ravioli with lemon, ricotta, and butter, and it was just the simplest bite I ever had, and still to this day, the most mind-blowing meal. There’s nothing like the care and love Italy puts into their food.

In your opinion, what cuisine is most underrated?

I really wish the U.S. would get more into oxtail. I really, really love the flavor and the tenderness of a beautiful oxtail stew. I wish it were more mainstream. Sometimes, for me, things like a creepy grocery store item like Spam can be underrated. I lived in Hawaii for a few years, so I just kind of learned to think of it as a meat. I’ve made a Spam taco before with shrimp. It was fantastic. There’s just things you can do to simple food like that to really elevate them and make them delicious.

What do you love to eat but hate to cook?

Up until a few years ago, I’d never attempt to sear my own scallops at home, but it was a dish I loved ordering. I’d always been scared of shellfish and seafood, but once you learn simple tips, you know it. Now I can’t even imagine a scallop at a restaurant that’s better than mine. But I’m still not crazy about boiling a lobster alive. Everything has feelings, and I can’t do it.

What’s your favorite meal of the day?

Dinner, for sure. Breakfast is OK, but I’m not in the best mood. Lunch is so boring to me. I’ll have two suppers—a dinner before dinner, then a proper dinner. It’s my jam.

What’s the best advice you can give to people who don’t cook a lot?

Take it slow. If you fail, we all fail. There’s no right and wrong way to do anything and you can really have fun with it.I find most everything to be salvageable, if not, just start over. Don’t get too down on yourself in the kitchen. That was my downfall for years.

You’re the OG of food Instagrams—what are some tips for taking better photos?

We’re designing a kitchen right now, and it’s very important that the lighting is great because I despise food filters. I hate when people filter their food; it should be bright and natural looking, and once you throw a filter over it, it kind of loses all of its character. What I do love to do when I take a picture of food, though, is bump up the contrast, saturation, and then the sharpness. People forget about that. But you’ll see, every kernel of corn will look beautiful. Leave the filters out of it for sure!

Cravings: Recipes for All the Food You Want to Eat is available now.