Moments before Chrishell Stause started a day of interviews for the second season of her Netflix reality show, Selling Sunset, she received a call that she was nominated for her first-ever Emmy for her role on the soap opera All My Children. “Today is such a celebratory day,” she tells StyleCaster.

And while Chrishell has been a veteran of soaps for the past 15 years, with roles on Days of Our Lives and Young & the Restless, nothing could prepare her for the drama that would unfold in her real life. In November 2019, news broke that Chrishell and her husband, Justin Hartley, were divorcing after two years of marriage. With a month left of Selling Sunset to film, Chrishell’s was at a loss at what to do.

“If I’m being perfectly honest, my knee-jerk reaction was I can’t do this,” she says. “[Quitting the show] did cross my mind. This isn’t something that anybody would sign up for or do on purpose. I would’ve given anything if everything had happened after. It’s a lot easier to talk about a little blurb and move on and just talk about the show. However, that being said, it was out there anyways, so now it’s almost like ripping a Band-Aid off.” 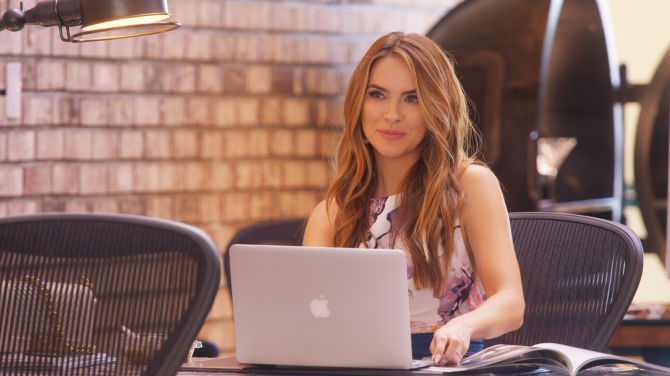 Selling Sunset follows Chrishell and other real estate agents at the Los Angeles brokerage The Oppenheim Group. While the first half of second season, which premiered on May 22, didn’t include any of Chrishell’s split, the last episode ended with a preview for the second half of the season, which showed Chrishell in tears as she opened up to her castmates about how her husband had “blindsided” her with a divorce.

“All of a sudden, I had not only the show following me, I had paparazzi on me. It was the most bizarre thing I’d ever lived through in my life,” she says. “Even now, when I look back on it, it seemed like it was a dream. A nightmare, to be honest. I didn’t necessarily choose to talk about it. It was unavoidable. They filmed what was going on. I had to address it.”

As for her ex’s reaction to her joining the show, Chrishell admits that her then-husband had “reservations” about her being on reality TV.  “I think everyone would probably have reservations signing up for something like this, which is fair,” she says. “That was a normal conversation that you have with anybody in your life who cares about you. They were normal conversations of concern.”

Still, despite what happened at the end of last year, Chrishell is content with where her life is at. She has an Emmy nomination. She’s a successful real estate broker. And she has a hit show on Netflix. “You can have it all, Chrishell,” her Selling Sunset costar, Mary Fitzgerald, tells her in our interview, to which Chrishell responds with a laugh: “Obviously not, but I have the career part down.”

Selling Sunset season 2 is available to stream on Netflix. 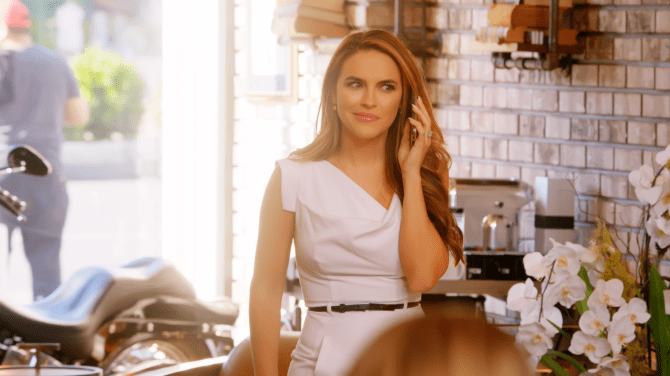 How were you approached for Selling Sunset?

“I did real estate for a different company. The Oppenheim Group was obviously a brokerage and they were working together, but for me to do the show, I had to leave my company and join The Oppenheim Group. But to be honest with you, the Oppenheim Group did so much more business and it was one of those things, where it was a no-brainer because if I was going to do real estate on the side, why not do it at one of the top agencies anyway? I’ve done TV before. Granted, this was not my comfort zone. But I thought I could handle it. I didn’t exactly know what I was signing up for. But I’m very glad I took that leap. When they filmed me walking into the office, that’s when I met everybody. It was fun—for the most part.”

“In season 1, I had a thing with Maya. I was working with different information than what everyone else was aware of. I’ve learned a lot of lessons from season 1. You find out that information from the actual source. Don’t just trust anybody that tells you that. That was a real cringe moment because in real life, without cameras, of course I wouldn’t do that. But all of sudden, it’s like, ‘Oh. But someone said that everyone knew?’ And then you’re caught. That was a very cringey moment for me because, as a woman, that’s a very personal thing.”

“In season 1, I feel like some people think our lives are dramatized for the show when in fact, if you could watch the whole thing, it’s worse a lot of the time. They have to cut it down. For season 2, I shot with my little sister, who I love so much, but unfortunately that didn’t make the show.” 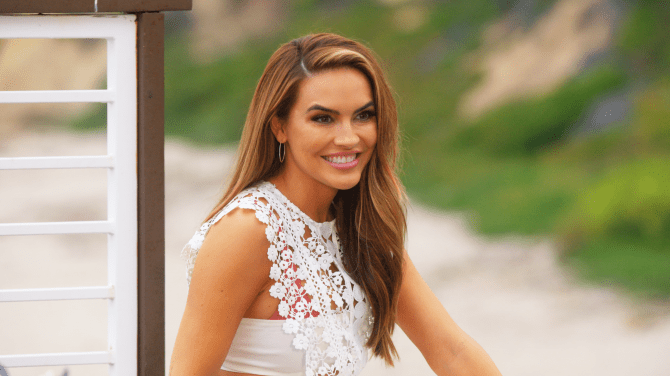 “I was very open with my upbringing and my past. For me, I get a lot of people coming up and relating to a story or the way I was raised or where I come from. I get that constantly. People from small towns. People who deal with homelessness. People that have really had to struggle in their life, before or current. It’s amazing and touching. I love that about the show.”

“Having come from the scripted world, I was like, ‘OK. I should be fine.’ Honestly, I wasn’t prepared at all. I learned that it’s a different process to film something months and months ago, hash it out and then have it re-air. These are real things. These aren’t storylines that were written for us. It was hard because there’s a personal element and people’s real feelings get hurt. Going into season 2, it keeps you cognizant that every little conversation you have, three months down the road, you better remember what you said because that’s bitten me in the butt a few times. My memory sucks. I’m used to having to memorize lines. But I’m not used to having to remember little conversations that I had.”

Who’s someone you didn’t think you would get along with at first?

“I went into this assuming I would probably be friends with everyone. If anything, it was a little bit of the opposite. The one person, because I viewed him sort of as the boss, would be Jason Oppenheim, who runs the brokerage. Initially, I thought of him as the boss, and now we’ve become really good friends. I go to him for any questions I have, and we’ve hung out so much outside of work. For me, that was a surprising friendship to come out of this. Because now I don’t think of him like that. I just think of him as a friend.”

“I was tempted at one point. I’m a huge Big Brother fan. I love the show. I love the competition. Obviously, I wouldn’t love being stuck in a house with everybody, but if there ever was one to really tempt me, it would be that. feel like they’ve all been thrown out there. Dancing With the Stars. All this stuff. But the one I feel like I had a chance to be good at would be Big Brother. But then you’d be stuck in a house with people and cameras., so that would not be great. Maybe this is how all the fans feel when watching the show, but you watch it and you feel like you can do good.”