The slap heard around the world. Chris Rock shaded Will Smith after he slapped him at the Oscars 2022 for his joke about Jada Pinkett-Smith’s bald head.

Chris and Will went viral at the 94th Academy Awards on March 27, 2022, after the Fresh Prince of Bel-Air alum slapped the stand-up comedian for a joke he made about his wife’s hair. The moment started when Chris took the stage to present the Oscar for Best Documentary Feature and joked that Jada—who has alopecia, a disorder that causes hair loss—looked like G.I. Jane, Demi Moore’s character from the 1997 movie of the same name. “Jada, I love you. G.I. Jane, can’t wait to see you,” Chris said, as the camera panned to Jada’s unamused face. The Oscars then showed Will walking up to Chris on stage before he slaps him across the face. ““Will Smith just fucking smacked the shit out of me,” Chris said. After he took back his seat, Will yelled at Chris, “Keep my wife’s name out your fucking mouth. Keep my wife’s name out your fucking mouth!” “I’m going to—OK?” Chris responded as he continued with his Oscars category.

But what happened next? In a post by Vanity Fair on March 29, 2022, writer Anthony Breznican reported that Chris’ cheek was red when he returned backstage after Will slapped him. The magazine also reported that Chris made a diss at Chris’ performance as Muhammad Ali in 2001’s Ali and how the actor couldn’t even “leave a scratch” on him despite playing one of the famous boxers of all time. “When Chris Rock walked back to the wings of the stage with the winners, his cheek was red, but he tried to play it off to the gobsmacked crew and fellow presenters by making a joke about one of Will Smith’s other Oscar-nominated roles. One witness said he remarked loudly, ‘That’s the only time you get hit my Muhammad Ali and it doesn’t leave a scratch,'” Vanity Fair reported. 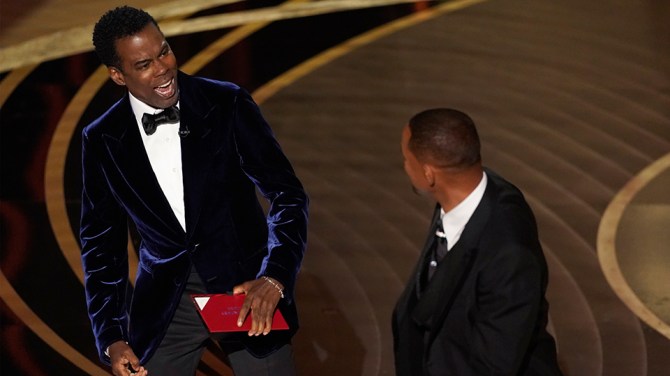 According to TMZ, Chris was asked by the Los Angeles Police Department after the incident if he wanted to file a police report and press assault and battery charges against Will, which he declined. The site reported that officers from the LAPD were at the Oscars and approached Chris and his team after the brawl, where they told him about his options. After Chris declined to press charges, the LAPD told him that, if he changes his mind, he can still file a report at a later date, according to TMZ.

A day after the Oscars, Will took to his Instagram to apologize to Chris and the Academy of Motion Pictures and Sciences for his behavior at the awards show. “Violence in all of its forms is poisonous and destructive. My behavior at last night’s Academy Awards was unacceptable and inexcusable. Jokes at my expense are a part of the job, but a joke about Jada’s medical condition was too much for me to bear and I reacted emotionally,” he wrote. He continued, “I would like to publicly apologize to you, Chris. I was out of line and I was wrong. I am embarrassed and my actions were not indicative of the man I want to be. There is no place for violence in a world of love and kindness.”

Smith—who won the Oscar for Best Picture for his performance as Richard Williams, the father of Serena and Venus Williams, in 2021’s King Richard—also apologized to the Williams’ family for how he acted. “I would also like to apologize to the Academy, the producers of the show, all the attendees and everyone watching around the world. I would like to apologize to the Williams Family and my King Richard Family. I deeply regret that my behavior has stained what has been an otherwise gorgeous journey for all of us,” he wrote. He added, “I am a work in progress.”