Wedding bells are ringing! After reportedly dating for months, Chris Pratt and Katherine Schwarzenegger are officially getting married. The couple confirmed it on Instagram on January 14—is there any other way to do it these days?—and the world is ecstatic! The cute, cozy photo of Pratt and Schwarzenegger had us all saying, “awww!” She also just *happened* to have the ring placed in the perfect location for all of us to see the gorgeous diamond. Wow! Well done, Chris. We have some of the wedding details, but first we must point out that when Chris Pratt and Katherine Schwarzenegger have a baby, it is going to be BEAUTIFUL. And babies are already on Pratt’s mind! In a recent interview, He opened up to Entertainment Tonight, saying that he definitely sees “lots of kids” in his and Schwarzenegger’s future. Oh, baby! (literally).

“I always want to be that guy that works to live, not lives to work,” he added. “I think [I want to spend just a lot of time at the farm and a lot of time catching a lot of fish and seeing lots of sunsets.”

Pratt already has a little boy named Jack with his first wife, Anna Faris. From the looks of it, Pratt’s son loves to wish, and we’re pretty sure the Jurassic World star instill that same passion in all of his future children. On June 29, 2017, Pratt shared this adorable photo with Jack saying, “not sure what made me more proud: when Jack insisted on holding this barracuda himself, or when he tried it raw! (Barracuda sashimi is amazing by the way) haha!! 4 year olds will try anything! Get out and fish! No better way to share God’s bounty with your babies and make life long memories than fishing! Get out on the water! #fishing #fishingislife”

Prior to his engagement with Schwarzenegger, Pratt was married to Faris for nine years. The couple split up August of 2016 and fans were truly devestated. This time, Twitter and Facebook were the selected social media platform for this announcement. Both posted statements saying that they will forever love and respect one another and always make sure Jack, their 6-year-old son, was kept out of it. 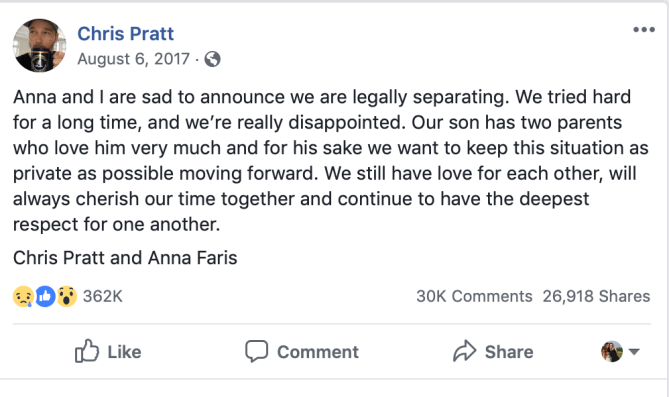 Fortunately, it really did feel that the couple still cared for one another deeply. Sometimes things just don’t work out.

On June 1,  2018, Pratt and Schwarzenegger were photographed together in Santa Barbara, CA. It came out that the couple had reportedly been seeing each other since April but wanted to keep it relatively quiet. Since then, this couple has had a wonderfully understated but seemingly romantic romance. Pratt and Schwarzenegger were able to keep their relationship relatively private, which is an incredible feat in this social-media-driven-society.

Pratt shared a cute birthday post for Schwarzenegger on her birthday, December 13, 2018—exactly one month before they announced their engagement! He captioned his photo, “Happy Birthday Chief! Your smile lights up the room. I’ve cherished our time together. Thrilled God put you in my life. Thankful for the laughs, kisses, talks, hikes, love and care.♥️🍾🎉🎂”

And now, just a short eight months after reportedly starting to date the couple is ready to tie the knot! When you know, you know!

And of course, Pratt was sure to inform his ex-wife, Farris, of his decision before the world found out. Smart move, dude. “Chris texted me this morning and was like, ‘I proposed to Katherine last night,” Faris said on her podcast, Anna Faris Is Unqualified. “And I was like, ‘Ahh, that’s amazing.’ I texted him back like, ‘I just want to remind you that I’m an ordained minister.” Ha-ha … interesting comment from your ex-wife, but we’re sure both comedians will get the joke. (And Anna—are you saying you’re available? Can you marry all of us? LMK.)

“I’m so happy for them,” she added. “I knew it was gonna happen and I love her and I love him and I’m just so happy that they found each other.” So sweet!

The couple, who are now engaged after just eight months are hoping to be married within the next eight months, E! News reports. The two “are looking at summer wedding dates,” a source told the outlet. And, though both Pratt and Schwarzenegger are based in California, they’re hoping to make the wedding destination someone on the east coast. “They are thinking about Martha’s Vineyard (in Massachusetts), which is a special place for Katherine and where she spent a lot of time growing up,” the source added. “It will be a big wedding. Very traditional.”

We’re hoping to see Jack as Pratt and Schwarzenegger’s ring bearer—how adorable would that be? The future Pratts are planning a big summer wedding We also look forward to some baby announcements within the year. The couple was quick to decide on marriage, so we’re pretty sure they won’t waste any time having kids!

Here was Pratt’s sweet engagement post dedicated to Schwarzenegger. He wrote, “Sweet Katherine, so happy you said yes! I’m thrilled to be marrying you. Proud to live boldly in faith with you. Here we go! 💍🙏♥️”