Chloë Grace Moretz apparently has a new underboob tattoo, though her tattoo artist deleted the image of the fresh ink almost as soon as he posted it. Yesterday, famed L.A. tattoo specialist Doctor Woo posted a shot of his work, alongside the caption, “Some healed ones on @chloegmoretz,” as the Daily Mail reports. The tattoo reads, “It gets better than this,” in script. 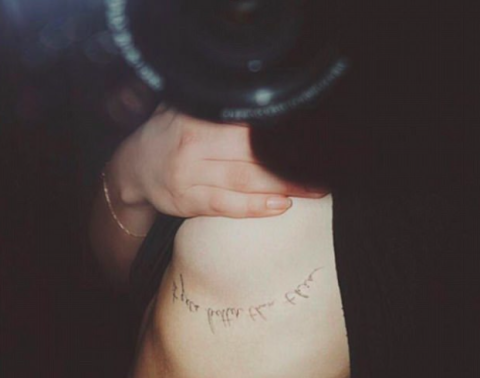 We’re not sure why Dr. Woo posted and then so quickly deleted the post, but this is definitely not the first tattoo Moretz has gotten, and it likely won’t be her last. “My latest tattoo is the number 4,419 on my hip,” she told Allure last year. “It’s the 4,419 miles that I drove cross-country when I turned 18. It represents coming of age.”

She detailed her other tattoos to the publication as well. “I have my grandmother’s signature on my back, along with a rose and a cross; my family’s initials on my thigh; the letters CK on my ankle [she and best friend Kathryn both have it]; a color spectrum on my hip for LGBTQ pride [two of Moretz’s four brothers are gay]; and the print of my sister’s feet—who passed away when she was, like, two days old—on my ankle,” she said. Add the “It gets better than this” underboob ink to the list—we can’t wait until she reveals more about this one!