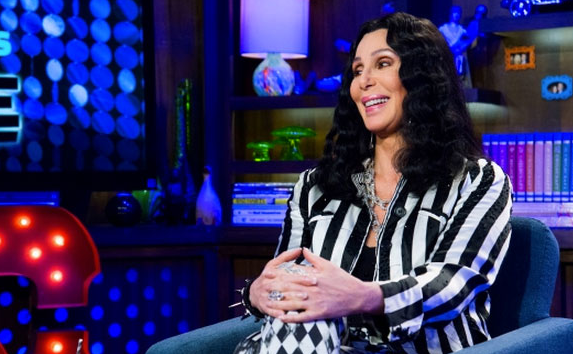 Okay, we know we’re not the only ones who absolutely love surprising celebrity couples. You know, the ones you totally forgot dated—or maybe you never even knew—like Madonna and Dennis Rodman, or Tyra Banks and Seal. But by far the best throwback A-list couple is legendary diva Cher and Tom Cruise.

Last night, the 67-year-old singer stopped by Bravo’s “Watch What Happens Live” to partake in witty banter with the show’s host Andy Cohen, who recently upped his fashion cred as the host of the CFDA Awards. Clad in a fairly bizarre striped ensemble that looked like a designer’s take on a prison uniform, Cher dished on her brief time with Cruise back in the early 1980s.

As Cruise—and his devotion to Scientology—tend to be controversial topics in the media, it’s no surprise that Cohen immediately inquired about the relationship. “Aw, well, he wasn’t a Scientologist then! It was pretty hot and heavy for a little minute,” she stated. “I’ve had just the greatest lovers ever! … He was in the top five.”

Um, wow. Not only is that an aggressive overshare, but it’s just utterly ridiculous to even entertain the thought of them being a real couple. Alas, truth is stranger than fiction.

What do you think of this random tidbit of celebrity gossip? Gross or hilarious?

MORE STARS ON STYLECASTER:
Who Knew They Dated?! 15 Surprising Former Celebrity Couples
Battle of the Divas: Madonna and Cher Both Rocked Wild Looks