Charli XCX is doing better than ever—here and in other dimensions. The British songwriter has had quite a year with the release of her new album, collaborating with amazing artists and going on tour around the world. She’s just finished the U.S. leg of her tour and is wrapping up her run in Europe as she catches up with StyleCaster over the phone.

Charli’s world tour is in support of her fifth studio album Crash, which was released in March 2022. The record is entrancing, with amazing collaborations with pop superstars like Rina Sawayama, Christine and the Queens and Caroline Polachek. On the record, Charli explores her ideas about the pop industry—including the exhausting effects it has on the women who are at its forefront. Songs like “Good Ones” and “Used to Know Me” also investigate what it means to break free from the constraints of relationships and seek one’s best potential in all areas of life. “I think this current record is definitely about power and power constructs within relationships and then within yourself,” Charli tells StyleCaster. “But I still want fans to be able to party to this music. I think there’s a great soundtrack to parties in this album.”

Before her tour wraps, Charli is also celebrating Crash with new collaborations. She’s unleashing her music in a Doritos concert on June 23, 2022, which will feature a virtual performance in Stranger Things’ Upside Down alongside 80s legends Soft Cell, The Go-Gos and Corey Hart. The story goes that the three iconic bands were on the way to the Doritos Music Festival, but were transported to another dimension and never made it. Now, they’re back and ready to perform alongside Charli XCX just in time for the release of Stranger Things season 4 on Netflix.

Now more than ever, I think it’s really cool that parties exist.

“It’s one thing to be able to share my music with my fans but having the opportunity to perform alongside some of the most iconic bands and singers is truly something out of this world,” Charli shared with StyleCaster in a press release. “Doritos is doing something really cool by giving Stranger Things fans a new way to celebrate their favorite show with ‘Live From The Upside Down.’ I can’t wait for everyone to join us for this concert!” 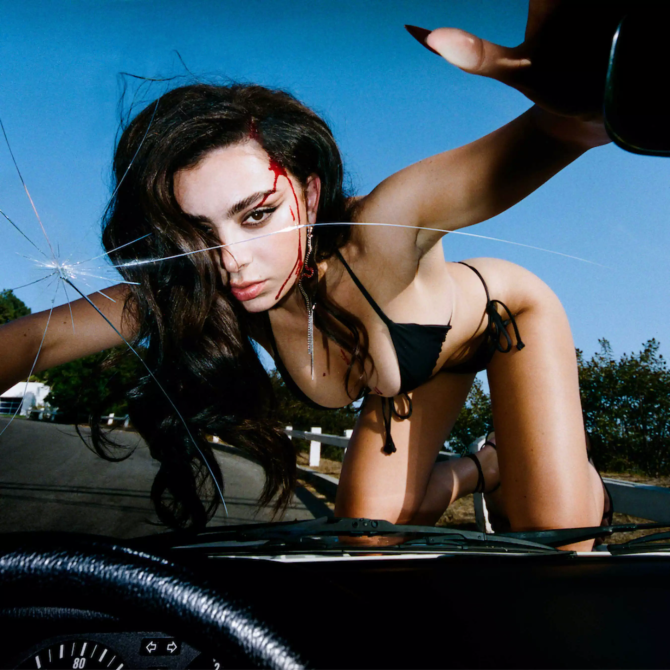 Up ahead, Charli talks to StyleCaster about her favorite memes from fans, partying and her iconic collaborations—including her 2022 track, “Beg For You,” with SEVENTEEN’s Vernon.

“Communal spaces and parties are places where people gather together to play music loud and dance and celebrate. Now more than ever, I think it’s really cool that parties exist. My shows are kind of like parties. They’re gigs, but they’re also kind of for a season. It just feels more euphoric than ever, post-pandemic. So that’s really cool and something that I’m very grateful to have back in my life.”

“If I’m attending a festival, I keep the makeup simple. I’m not one for glitter and sticking things on my face. I like to keep it chic. Maybe just glossy lids and a natural lip, and then just go sweat and party and have fun. I’m British and the UK festivals are very muddy and rainy, so we would always say Wellington Boots are essential. Not sure if you actually need those for many festivals in the US. So in that case, I’d just say a really sturdy, good shoulder bag or bum bag. Do you guys [Americans] call those fanny packs? I think you do, yeah. One of my favorite brands at the moment is Marc Jacobs’ new line, Heaven. I also just love good vintage funny t-shirts.”

I have a really unique and good connection with my fanbase.

On Collaborating with SEVENTEEN’s Vernon

“I love everyone I collaborate with, otherwise, I wouldn’t collaborate with them. But I think that the Vernon and A.G. Cook collab remix on “Beg For You” was particularly unique because it came from Twitter and it just happened really quickly. I feel like people online started talking, and made it clear that they would like to collaborate. I’ve seen tweets and snippets of interviews where he had spoken about my music and myself, which I thought was really sweet and it was obviously honored that he’s into my music. So I kind of felt like it was a long shot when I actually reached out. I think he absolutely killed the verse. I’m very happy that collaboration is in existence.”

“They’re definitely very witty and funny. And I love a lot of the [Charli XCX] meme accounts that are in existence. I love the things they post. I’m reposting them a lot of the time and it’s cool. I have a really unique and good connection with my fanbase. I do genuinely feel like we get each other and I feel very supported by them. They’re awesome, and they have great taste.”

On Performing in the Upside Down

“This is definitely a very special show. It’s quite a short appearance for me, and I’m doing one of my own songs, and I’m also doing a collaboration with one of the other artists who are on the bill. You actually have to wait and see to tune in to the actual show on June 23rd to find out who that is. But it’s very cool and it’s very iconic. The whole thing is going to be really fun and just really different because we’re not performing on a stage. We’re performing within the Upside-Down, which is a very different setting from a normal show. So yeah, everybody should check out, and to get a ticket, you just have to go and grab a bag of Stranger Things Doritos. There’s a little virtual ticket in there. And then you can come to the show virtually, which will be super hot.”

This interview has been lightly edited and condensed for clarity.